The PC version of Batman: Arkham Knight is finally back on sale, just 18 weeks after it was removed following poor feedback. At the time of launch, way back in June, the major complaints included abysmal performance, frame stuttering and a lack of options. There were some missing visual effects too, but they were added a week after release. Fortunately for gamers, it launched on Steam not long after the refund system was implemented, and that may have provided the transparency needed to compel Warner Brothers to pull the game and begin working on improvements. Not that it needed to be much more transparent—Steam user reviews hit ‘overwhelming negative’ after just a few days. Warner Brothers now believe the game is fit for sale. The good news is that it has more graphical options and the performance is better than its original launch. Unfortunately it is still not the best port. While it took four months, Arkham Knight on the PC is now at least playable, and gamers can turn their focus to the excellent content found within this Batman sequel. 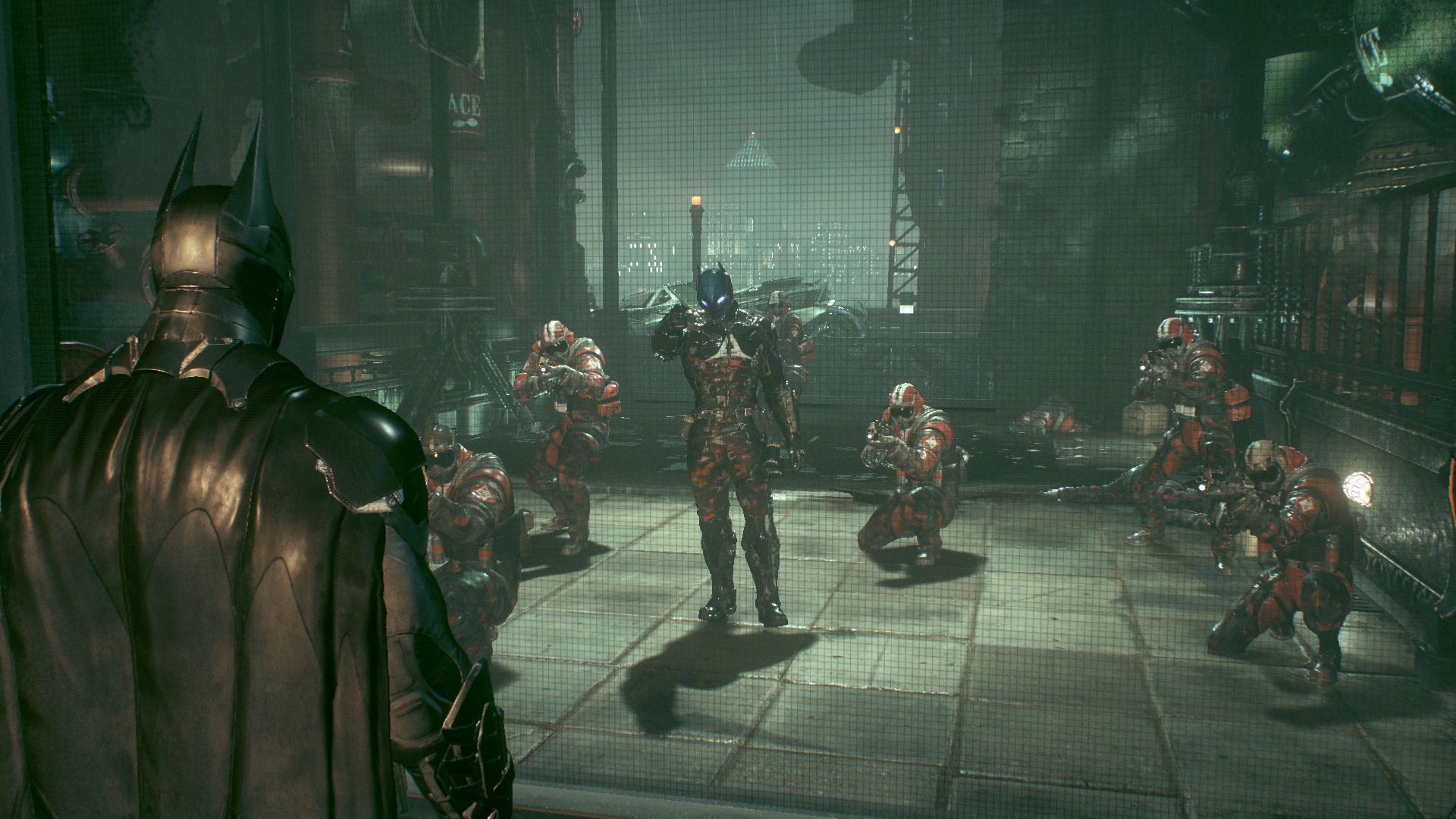 Arkham Knight is the final chapter in a franchise that has retained a comfortable level of uniformity since the original released six years ago. Each game in the Arkham series has focused heavily on stealth, puzzles and free-flowing melee combat with only minor changes to the basic formula. The series has persisted with iconic villains and even preserved a similar visual style. Despite this consistency, each chapter has been an excellent adventure, capturing the essence of the caped crusader. The series was due for an injection of new content, and Rocksteady have decided to utilize Batman’s iconic wheeled-vehicle to provide that freshness. While it retains the core elements of the series, Batman: Arkham Knight adds scope with a flexible Batmobile that is interwoven heavily into a sprawling Gotham city.

The story in Arkham Knight revolves around two main villains that have joined forces following the events of Arkham City. Scarecrow is back with his fear toxins and a new enemy, Arkham Knight, commands an army that provides the necessary muscle. Scarecrow proves to be a fantastic main adversary in this sequel, with fear toxins that produce clever surprises. He begins the fear campaign by forcing the evacuation of civilians, under the threat of a Biological weapon, leaving criminals rioting throughout an abandoned Gotham city. Scarecrow regularly appears on TV screens, sporting a terrifying new look and providing stimulating commentary. Despite his efficacy as a major villain, he is upstaged by a character that spends a great deal of time talking to Bats, so much so that he practically becomes an ally. While this character’s identity is best kept secret, his inclusion enhances the experience with sharp dialogue in unexpected places. In comparison to these two excellent characters, the Arkham Knight is a dry and vengeful brute. Voiced by the ever-present Troy Baker—who also unmistakably voices a pathetic Two-Face—the Knight’s mysterious identity is dangled in front of Batman without misdirection. Fortunately this is only one of several surprises in the main story. With police spread thin across Gotham, Batman must stop these villains and restore order. 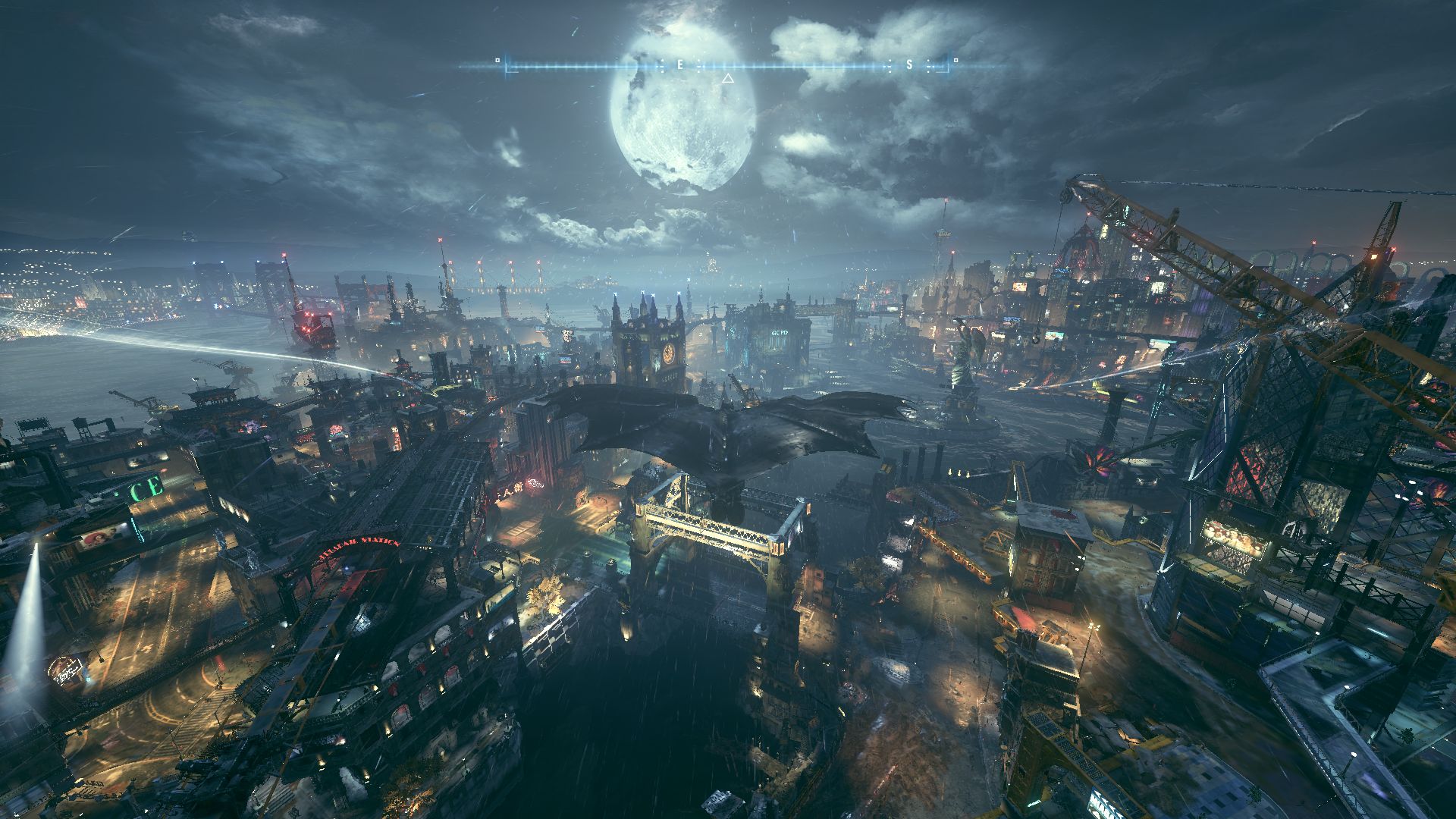 The city is truly spectacular

Gotham city is an incredible virtual space and a major asset in this sequel. The playable area is massive, consisting of three large islands that are each more expansive than the previous games. The quality of the city remains exceptional given the comparative size. For the first time in the series, the world feels like a genuine sandbox where you are not funnelled through areas or restricted to shoebox combat spaces. Within the city there are numerous side tasks associated with major villains, including Riddler trophies, murder victims, watchtowers and weapon caches. They are staggered in such a way that you need not travel far to locate a point of interest. The use of color in the city, particularly with neon signs and reflections, makes it the most vibrant in the series to date. The designers have crafted many attractive indoor spaces—including a movie studio which features a hilarious serenade dedicated to our hero. The Gotham Police Department becomes a visual representation of progression, populating with rescued allies and imprisoned foes. Action zones are regularly found on rooftops, providing astonishing skyline views and unrestricted access. Unlike Origins, there is no fast travel system, so getting around such a large area might have been tedious. Fortunately the batclaw can propel Batman at such speeds that gliding across the city is effortless.

Traversing the city is assisted with the inclusion of the Batmobile, but locomotion is merely the tip of the iceberg when it comes to its functionality. Primarily it is used to battle tank drones that roam the city. Destroying them is as easy as switching to a war mode that turns your speedy vehicle into an agile one. You can strafe projectiles and fire a cannon that obliterates tanks. Additional challenges require you to hold position while dozens of these drones pummel you with rocket attacks. Story missions are not immune to the tank assaults, with some battles getting stale after recently completing the optional challenges. The tank combat takes the Batman franchise into the shallow waters of the shooter genre, and the action is satisfactory. The Batmobile combat adds variety, but could have been condensed to grant more exposure to other elements. 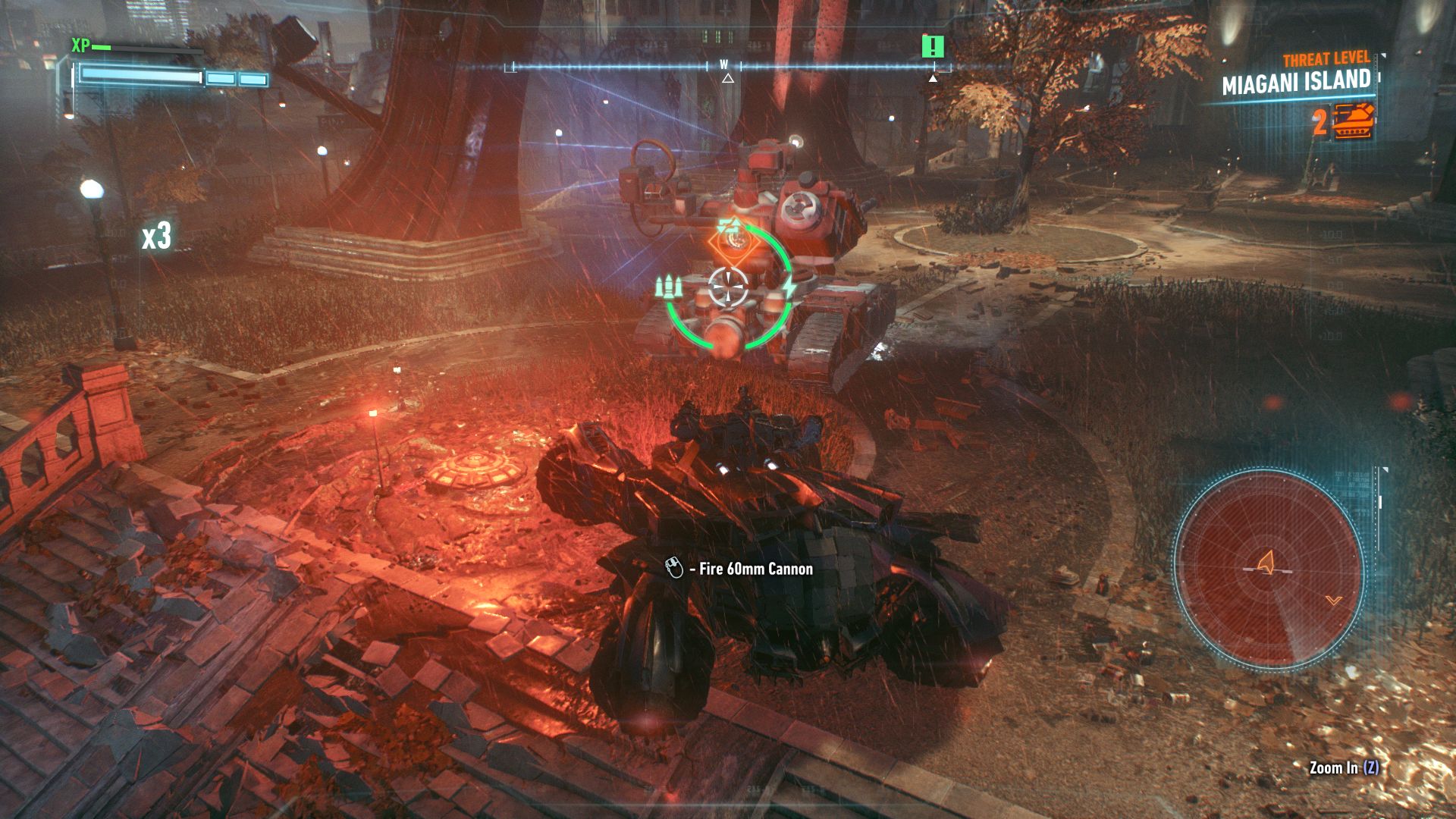 The Batmobile is even used for stealth

Batmobile functionality extends to puzzles, chases, races and even stealth. Solving puzzles is done by pulling or charging objects with a grapple or winch. The Batmobile can be controlled remotely, and this is good for surprising foes or solving puzzles that require hand-held gadgets. Many puzzles require your new ride, so it brings a fresh perspective on the standard brain teasers. If you are stuck on a puzzle, you may wish to chase vehicles around the streets. Unlike the tank drones, these vehicles contain humans, so blowing them away with the cannon goes against the canon. You must use a ‘friendlier’ rocket attack and force them to crash. These chases are dynamic, as you can crash targets quickly or get lost in the city streets. Pursuing targets around the city could not be smoother because the environment crumbles, and while this seems like a minor detail, it is the key reason why the Batmobile is so enjoyable to drive.

While chases are fun, the optional races might be even better. Created by your intellectual superior—The Riddler—these underground racetracks need to be completed if you wish to save an iconic ally. The tracks are littered with traps and obstacles, some of which need to be switched manually to avoid crashing to your death. It is a pity there are only a few tracks, but they can be repeated just like all the other unlocked challenges. Stealth is the final trick in the Batmobile’s repertoire and it is used to combat powerful armoured units that resist direct attack. Speeding through the city and flanking is fantastic, but sneaking up behind units as you trample cars and topple statues is strange. With such a broad range of activities, the Batmobile defines this sequel and shatters the series’ uniformity. 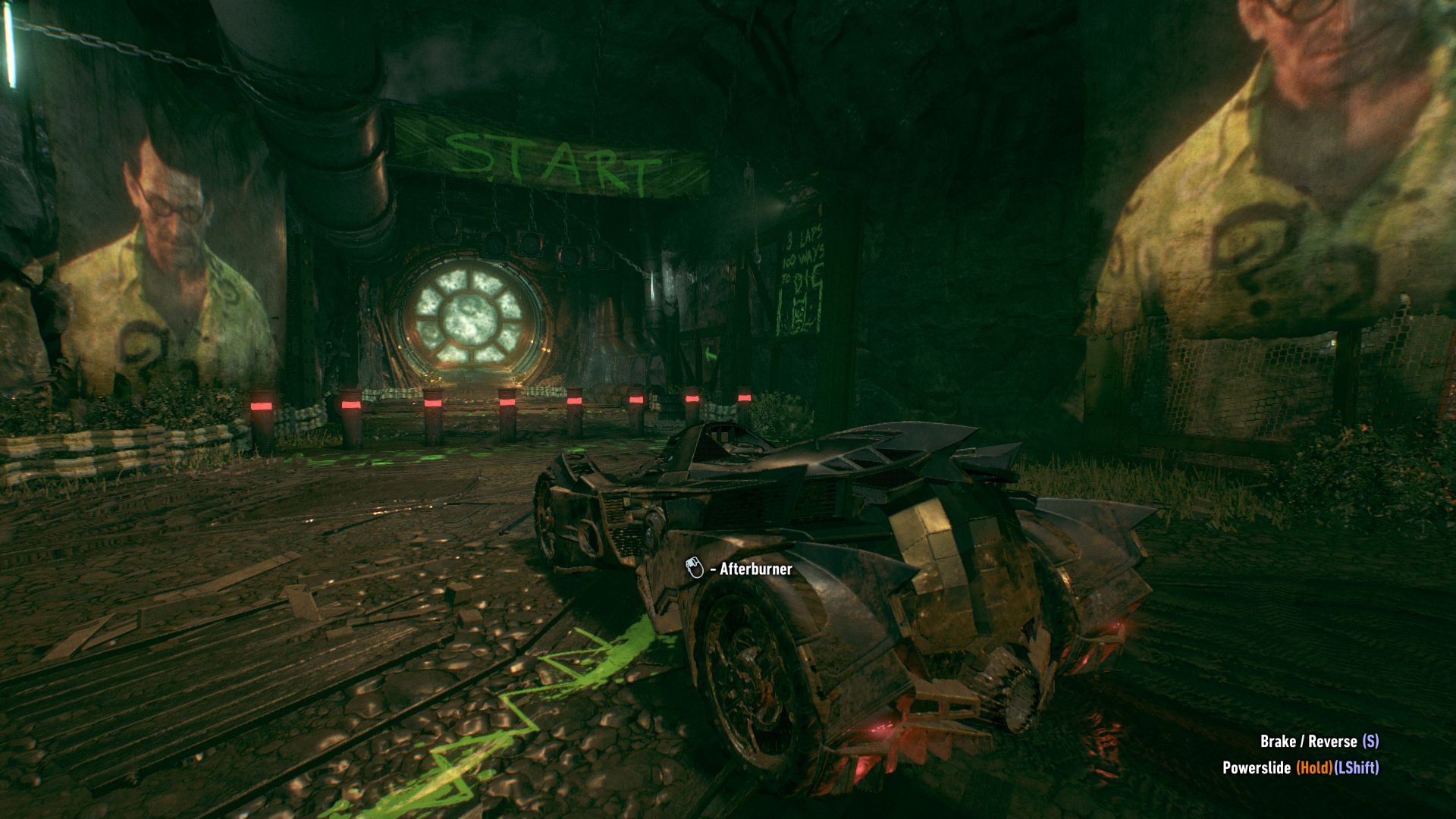 With so much of the game revolving around the Batmobile, it is easy to forget about melee combat and stealth. The flowing melee combat is just as satisfying as before but there are some new tricks. One trick is using environmental objects—light fixtures or electrical panels—for take-downs. This helps eliminate groups briskly, but unlike Sleeping Dogs it is not a game-changer. Incapacitating thugs rarely takes long, so basic enemies are never persistent nuisances. One unfortunate aspect of the sequel is the lack of typical boss fights, which instead fall to Batmobile encounters or cut scene takedowns. Perhaps a lack of boss battles is better than too many, but it does make defeating villains a little less satisfying. Even still, the fist combat is staggered nicely and never becomes arduous.

Stealth gameplay is probably the best facet of the Batman games and this sequel has notable improvements. Enemies are smarter, hunting back-to-back when their numbers have thinned. If you eliminate prey in one area, they will deploy sentry guns or mines to cover that position. After taking out three guards from the same floor access panel, a fourth used a napalm grenade to clear the floor vents. The voice synthesizer is a new gadget that helps separate targets until their commanders order them to stop following orders. The environment also plays a larger role in stealth—you can hack an escalator to send guards tumbling. Batman can even take down multiple enemies in a violent fear attack, which often produces a cinematic finish to stealth encounters. As this sequel has a broad range of activities, the stealth will seem underrepresented. In actuality there are many excellent predator arenas, but they are concealed amongst a collection of different tasks. 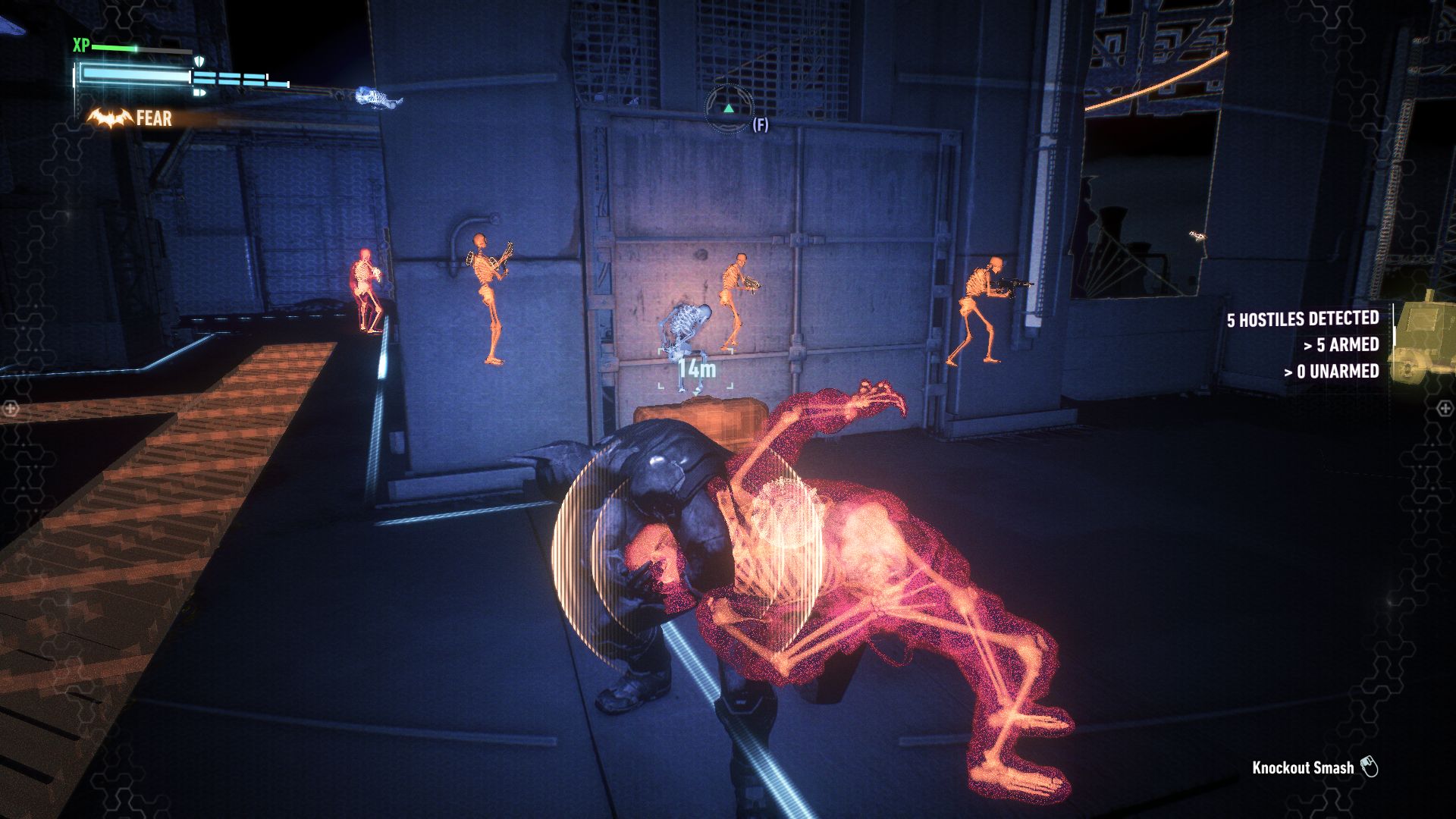 As mentioned, technical issues associated with the PC release were so severe that the game was removed from sale within days of launch. On my machine, the game was initially only playable at the lowest settings, with heavy stuttering when driving the Batmobile around the city. Fast-forward to early September, after the first—and only—performance patch, and the same machine saw minimal stuttering with graphics set to normal. The patch also brought more graphics options, allowing scrupulous gamers to disable things like that horrific Chromatic Aberration effect that developers insist on bringing to new titles. The patch for the re-release in late October did not bring any performance improvements or enhancements, although it did crash the game a few times until the settings were reset. Even on the lowest settings, the game still looks pretty good, aside from smudgy character textures. Gotham city is so beautiful and large that it partially justifies the shabby performance and streaming issues. Not that any of this excuses the poor state the game launched in. It took far too long to patch the game, especially when season pass owners had to watch more than half of the DLC released on other platforms. Although the initial performance was terrible, the game is entertaining enough to make technical problems seem minor. Arkham Knight is not the greatest performing PC game, but it now runs well enough to receive a passing grade.

Batman Arkham Knight is a terrific sequel that provides a genuine sandbox experience. Gotham city is the ideal virtual space for the caped crusader to battle a vast array of wonderful villains. The city is relaxing to explore, with a multitude of side tasks and indoor areas that focus on story. The Batmobile has a broad role, involved with everything from puzzles to stealth, and although well implemented, it occasionally steals the limelight with a few too many tank battles. Not to be outdone, the infrequent stealth has its finest hour and the melee combat never stagnates. If it were not for the technical issues and overuse of the Batmobile, this might be the best game in the series.

Our ratings for Batman: Arkham Knight on PC out of 100 (Ratings FAQ)
Presentation
89
Even on low settings, the city looks spectacular with only a few smudgy textures. Many excellent combat spaces both indoor and outdoor. Most characters are voiced well.
Gameplay
85
Includes a broad selection of tasks that are fun to complete. Stealth is great but hidden. Puzzles and chases put the Batmobile to good use. Tank battles are overused.
Single Player
84
Masterful villains return to haunt Batman, although some needed more screen time. Side content is mandatory to get the ‘real’ ending and that could take 25 hours.
Multiplayer
NR
None
Performance
(Show PC Specs)
CPU: Intel i5 3570k
GPU: Gigabyte 7950 OC 3GB
RAM: 8GB DDR3
OS: Windows 7 Ultimate 64-bit

68
Initially poorly optimized, now playable on normal settings with some framerate stuttering and occasional crashes. There are some minor bugs, including AI pathfinding errors.
Overall
85
Batman: Arkham Knight expands brilliantly on its predecessors with a massive city and a Batmobile that serves many roles.