Frictional Games have done some great things with the horror genre over the years. Despite their limited resources, they built compelling and haunting adventure games. The small development studio was able to produce tense experiences because they designed carefully within their limitations. Their previous games—Amnesia: The Dark Descent and the Penumbra series—implemented smart tricks to produce efficient scares. Some tricks involved the use of invisible creatures, or an insanity effect that discouraged players from staring at crude monsters. Limited voice work kept the narrative manageable and simple puzzles were good distractions when the player was not being pursued by nightmarish beasts. SOMA continues this elegant horror design and makes significant improvements to the atmosphere and world design. 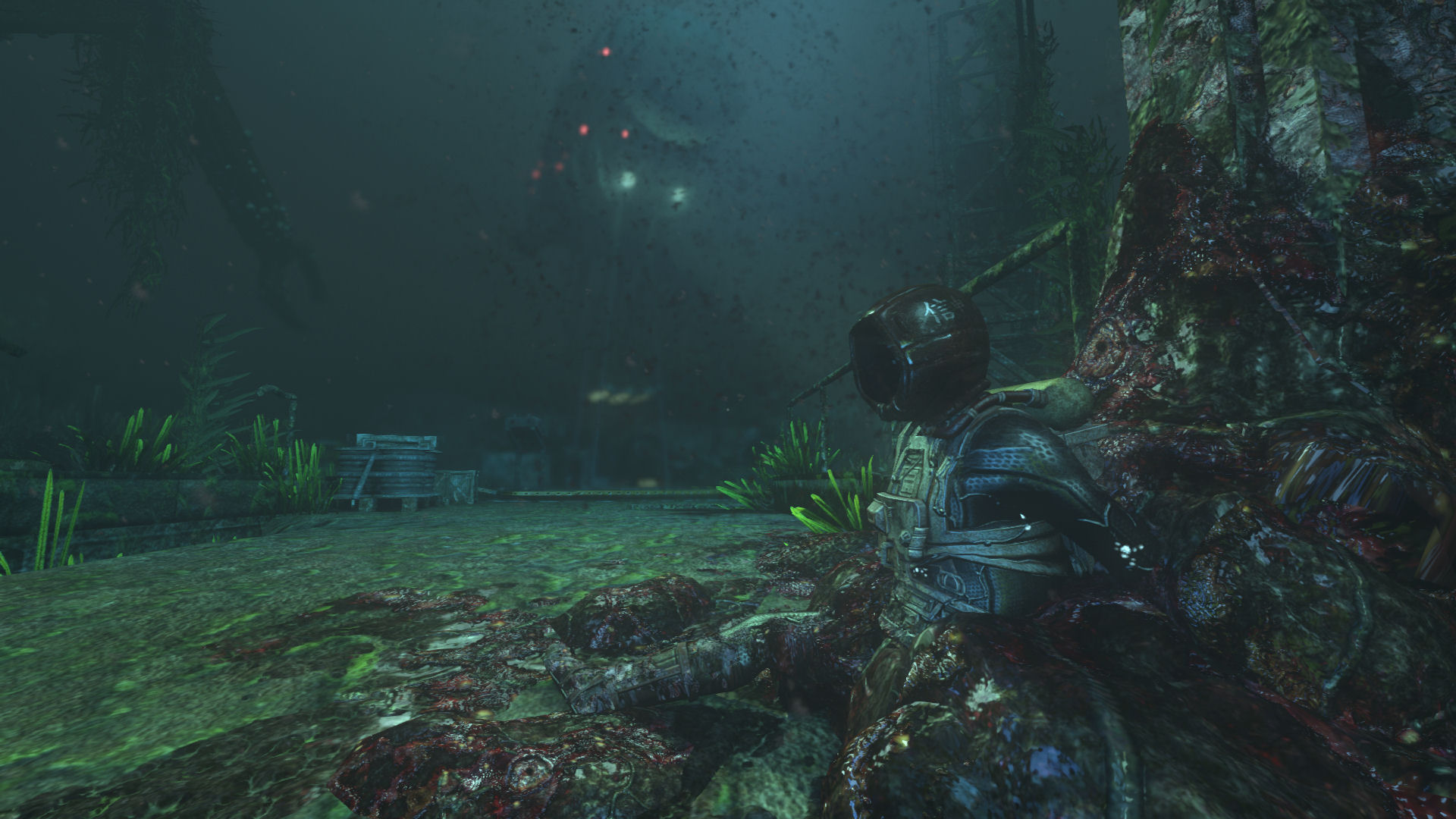 Welcome to PATHOS-II, on your right are the partially-dissolved corpses

In SOMA, players assume the role of Simon Jarrett as he regains consciousness in a mysterious and futuristic underwater facility. This submerged base, PATHOS-II, was constructed to safely launch payloads into orbit using an electromagnetic space-gun placed at the bottom of the Atlantic Ocean. The facility is split into numerous research stations, connected by shuttle trains, which are home to scientists and their robotic helpers. While it initially seems abandoned, the station is home to twisted machines and freakish creatures. The first robots you meet insist they are human—unable to accept their own mechanised appearance. Their digital circuits now contain the minds of the once-active inhabitants of the base. Not all the robots are friendly and a parasitic gel is infecting the electronics, bringing more chaos to the already damaged facility.

Unlocking the secrets in PATHOS-II is handled with an omnitool device that is acquired shortly after arriving on the base. This, along with various computer terminals, can open doors, cycle airlocks and activate equipment. Later, the omnitool will store the personality of one of the missing scientists—Catherine—who was trapped inside a damaged robot. She will guide Simon through the ocean facility and use his mobility to complete an important project that her human counterpart was unable to finish. This project, aptly codenamed ARK, is an attempt to preserve humanity in a simulation that will last forever. It is up to Simon and Catherine to find out what went wrong and circumvent any dangers along the way. 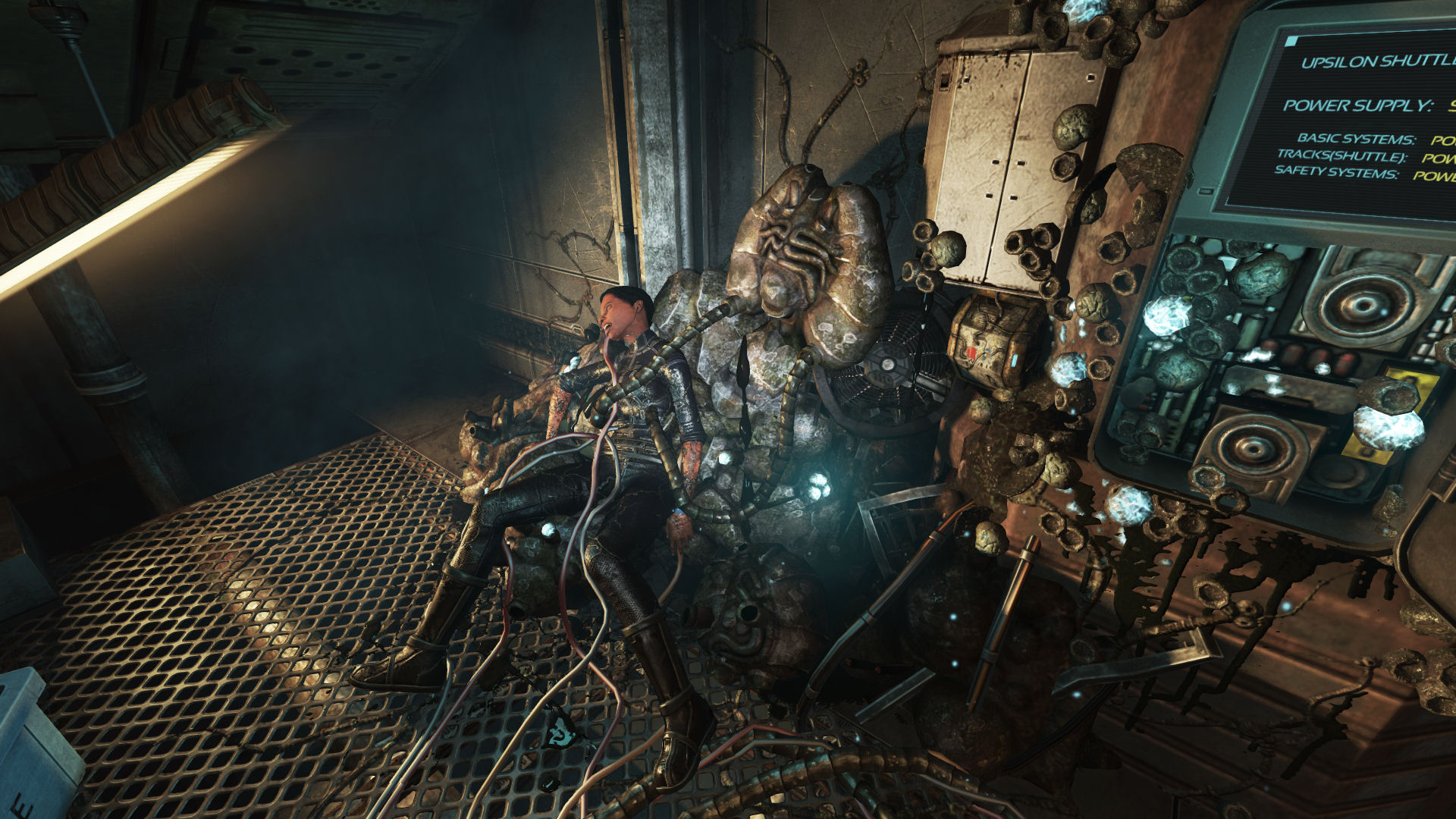 These Virtual Reality add-ons are really getting out of control

Aside from intelligent conversations with Catherine, context is provided by voiced dialogue and text logs. Simon hears from an extensive cast and can even listen to the final moments of those who have succumbed in the deep blue. The vast array of characters is slightly confusing, made more so with audio filters that equalize their marginally distinct voices. Most characters are story fodder though—classic redshirts—that make the situation more destitute. At least the major characters are memorable. None are more important than Catherine, who is unable to communicate unless the omnitool is docked at a computer station. Finding the next docking point is a hidden driving force between major goals. She has no concept of time when disconnected, so while you cower from strange creatures, she simply does not exist. Consciousness and existence are major themes in SOMA, but it takes some time before they elevate the narrative. The main sequence of events cannot be altered but tough decisions do convey importance. It is a precise tale that warrants thorough contemplation beyond its clever ending. While the narrative slowly becomes compelling, the adventure is still dominated by atmosphere and tension.

Visuals have improved greatly over the developer’s previous games and this plays an important role when capturing the essence of the underwater base. The interiors are haunting, with shadows that set the mood and power interruptions to send you scurrying into a corner. Subtle reflections on surfaces do wonders for the cluttered and lived-in interiors. Interactive computers are used for almost everything—from providing back-story via emails, to opening doors and booting up devices. Some areas have sci-fi designs comparable to the Penumbra games, but they employ more detail and have greater scope. While the corridors and science labs look great, the ocean exterior might look even better. The ocean floor is quite special with crustaceans that react to Simon’s presence and seaweed that moves with the underwater currents. Walking along the expansive seabed brings a different type of atmosphere. Whether clambering through bulkheads or leaping across coral, the visual trimmings help produce exquisite atmosphere. 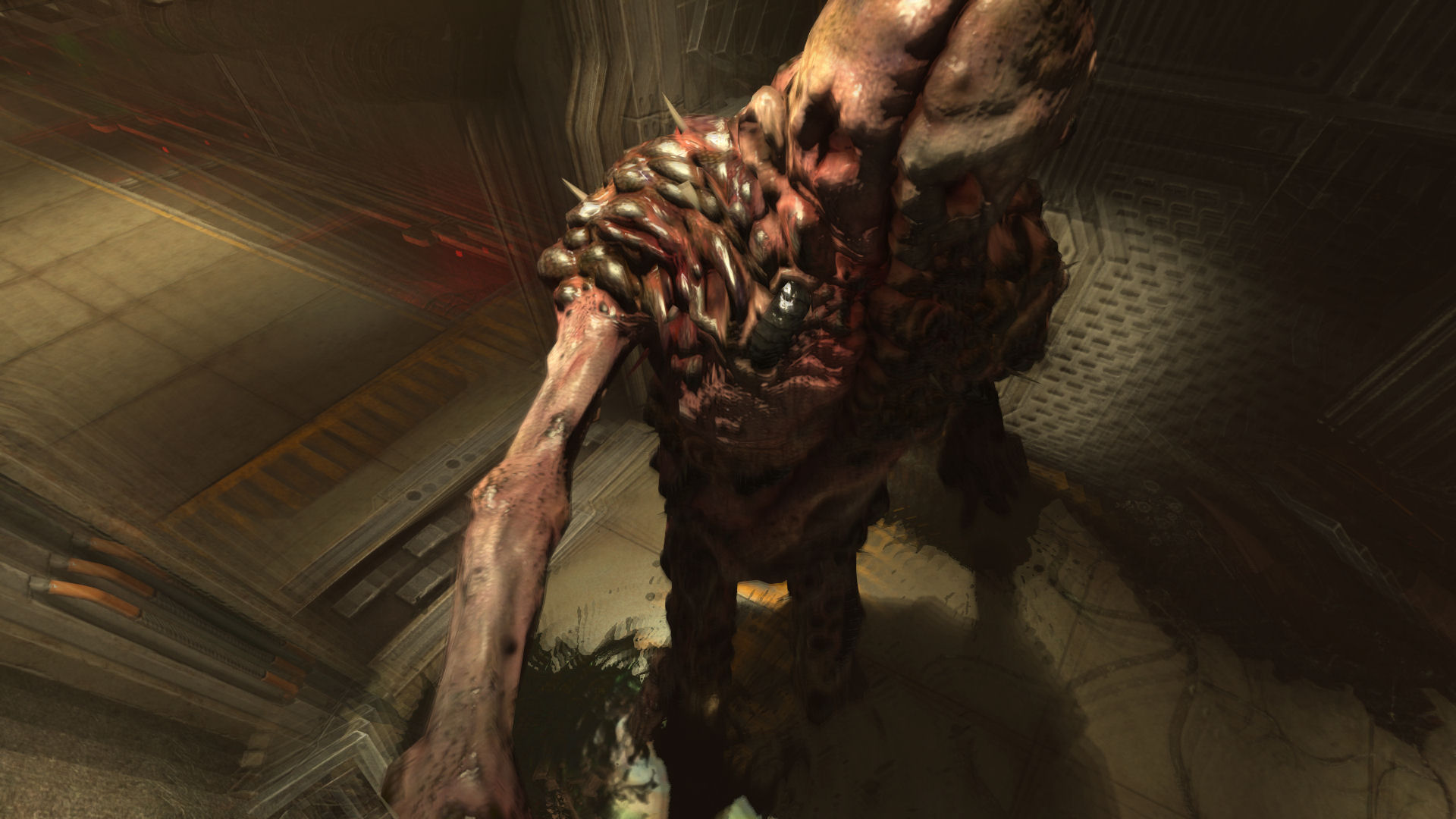 "Mr Monster, you misheard me. I said your shoulder was fetching, not retching"

Within the base, exhilarating tension is provided by strange noises and contorted enemies. The stations are continually producing sound, either from bulkheads creaking under the pressure or unseen terrors scrambling through vents. You will be under threat early, but it is several hours before it becomes terrifying enough to bring hesitation. The different and gruesome monsters are carefully distributed and their presence is usually stressful due to that variety. Sound produced by these creatures is bone-chilling, either because of loud footsteps or hellish shrieks. In a similar fashion to the insanity effect from Amnesia, the screen becomes distorted when enemies are near. Hearing them in pursuit was always nerve-wrecking. They patrol important areas and their vision ranges from blind to telescopic. Hiding from these creatures is natural and they often come so close to finding you, hiding behind a desk, before shambling off down a darkened corridor. Avoiding them is not necessarily hard, because the level design is clever and the area maps are useful, but even if you get caught you will only be knocked down and injured when on full health. This brush with death transfers the nightmarish creatures further into the level—allowing you at least one mistake before needing to regenerate from the bizarre-looking health stations. While it is never tranquil around these interior dwellers, there are moments of relief when you can close a hatch and take a deep breath.

One of the smartest breaks in tension comes from the walks outside the base in the open ocean. Walking along the sea floor is a significant part of the adventure with lengthy treks that encroach upon imposing silhouettes. The walks are usually linear but some take the player through open areas that have easily-missed side content, either relevant to the story or containing another visual horror scene. Often the route is exposed with generous lighting but, much like the interior pacing, these walks gradually become unsettling. The isolation brings vulnerability and the limited view distance is exploited with subtle frights that will send shivers down your spine. All of this is accompanied by stunning deep-water visuals and solemn marine life. While the walks along the ocean floor are scenic, the early ones are too leisurely and a bit long. They do help to demonstrate the scope of the adventure, which will take around nine hours to complete. 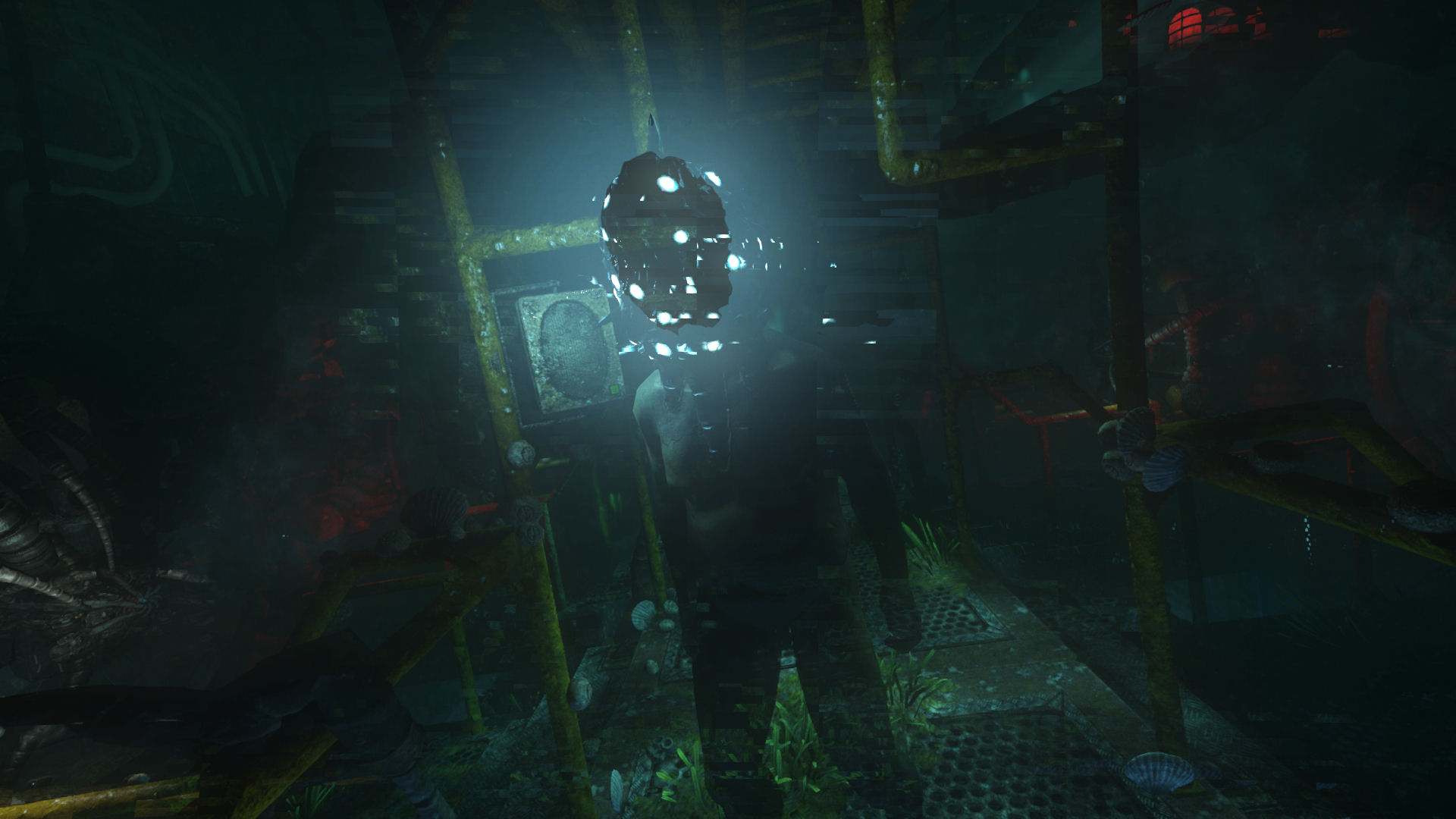 Puzzles and interactive tasks are not prominent or difficult, but are more substantial towards the end. There is still decent interactivity in the world as you pick up and rotate physical objects—used mostly to flip switches, disconnect plugs and slide doors. Many of the puzzles involve usable computer terminals, either to unlock doors or complete basic 2D riddles. One simple terminal puzzle required the alignment of a communications array to call an underwater transport. Tasks found later usually involved more steps, like needing to upload a code to a security device, before sealing a creature in a side room, so you could access the elevator. Finding that device can be done a few ways too, either by breaking glass—which alerts a disfigured horror—or by reassigning power to locked doors. Most puzzles are basic duties that fit within the fictional world and few require much thought. The steady increase in puzzle challenge keeps relative pace with the horror but they are never hard. The nature of the puzzles means you are not moving back and forth between areas for long either. More physics interactivity and deeper adventure puzzles would have only improved the experience. The simple puzzles and forward progression do make the game accessible, but they do not fully exploit the impressive environments.

While the game runs fine most of the time, there are some technical hiccups. Some areas, mostly those drowned in water, produced stresses on the otherwise steady framerate. These heavy dips in framerate were associated with ocean particle effects, volumetric lighting and abnormal view distances, most prominent in expansive areas. Fortunately the game never requires a high framerate, even when you are avoiding monsters. A few crashes were observed, although the game saves regularly to make this a minor issue. There were also a few geometry errors, like holes in the sea floor or walls with unintended gaps. There are no major technical failings but some issues do partly detract from the otherwise sublime atmosphere. 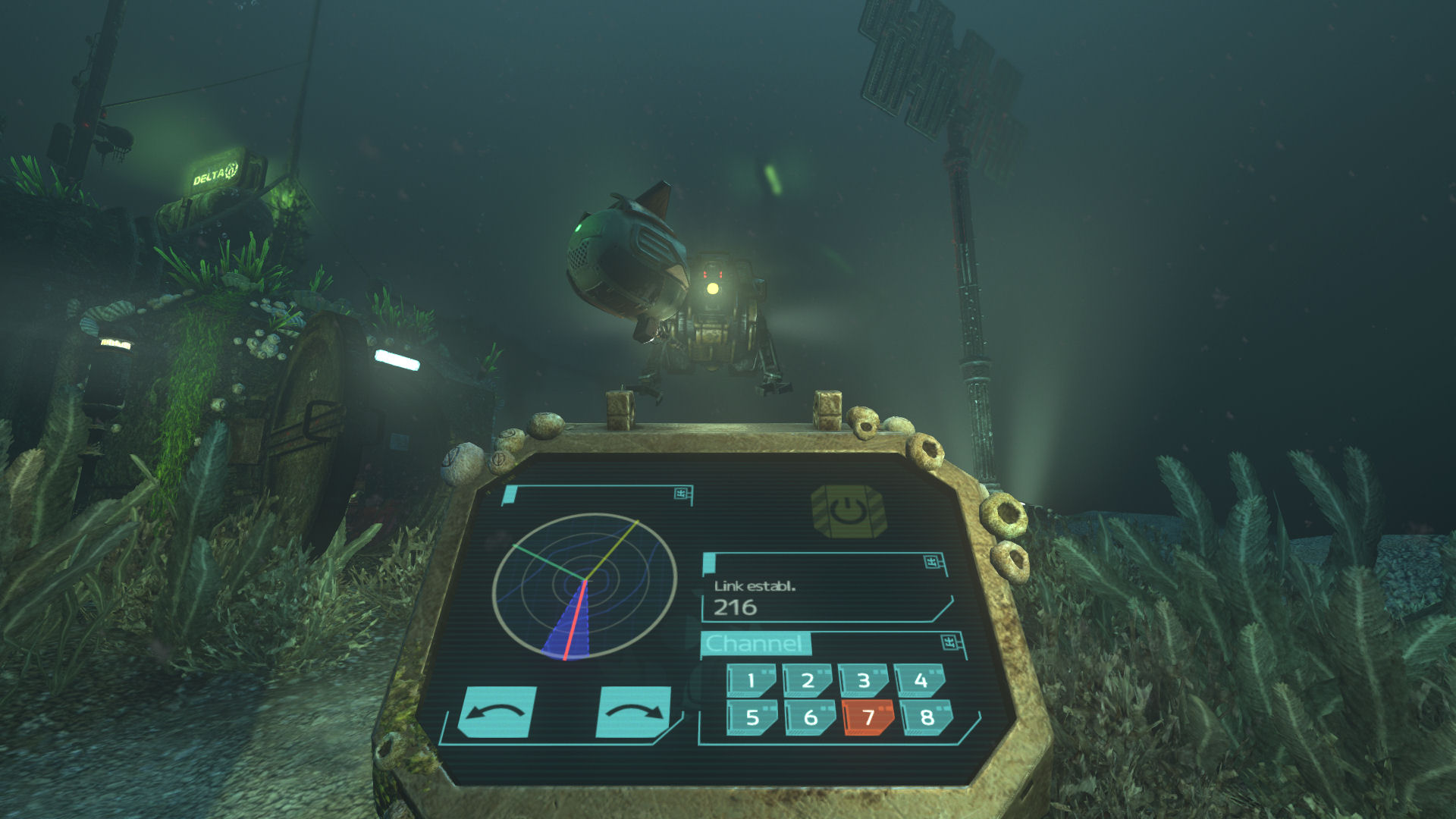 If I adjust this antenna just right, I can watch 'twitch plays SOMA'

Frictional Games have outdone themselves by producing a substantial and intriguing adventure that has all the horror trappings we have come to expect from the talented studio. This is their best looking and most atmospheric game yet, with tense interiors and isolating ocean walks. The variety of creatures and locations is quite surprising and progression is steady thanks to good horror pacing and increasing unease. The tension is complemented by an intriguing story and a large cast of voiced characters. Interactivity within the world is basic and logical, but it still proves valuable and keeps the player firmly grounded in the world. With more complicated puzzles and a greater challenge, it would have been almost perfect. SOMA is one of the finest horror-adventure games thanks to its thick atmosphere, healthy variety, tidal pacing and riveting narrative.

Our ratings for Soma on PC out of 100 (Ratings FAQ)
Presentation
86
Atmosphere is palpable with a detailed ocean base and poignant underwater vistas. Lots of voice work but they are hard to differentiate. Sound is great for the environment and diverse monsters.
Gameplay
81
The horror pacing is nearly perfect and stealth functions well. Good variety of monsters and side tasks. Puzzles are rarely challenging though, and it could have been more punishing.
Single Player
86
There is plenty of intrigue to discover in the sizable underwater facility. Progression is fairly linear, with some tough choices. A large cast helps to set the scale for the 8-10 hour adventure.
Multiplayer
NR
None
Performance
(Show PC Specs)
CPU: Intel i5 3570k
GPU: Gigabyte 7950 OC 3GB
RAM: 8GB DDR3
OS: Windows 7 Ultimate 64-bit

75
Certain areas destroy the generally steady framerate but it is never completely unplayable on maximum settings. Loading is mostly hidden from the player with only brief stutters. Some crashes.
Overall
84
SOMA creates a tangible underwater facility with overpowering tension and a haunting atmosphere. It paces the horror carefully and will captivate minds with its narrative. 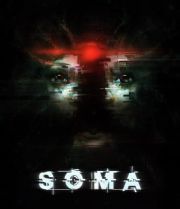 Our Review of Soma
84%
Great
The Verdict:
"Captivating atmosphere and smothering tension define this intriguing underwater adventure"
Game Ranking
Soma is ranked #238 out of 1690 total reviewed games. It is ranked #15 out of 110 games reviewed in 2015.
237. Kingdom Hearts HD 1.5 Remix
PlayStation 3
238. Soma

All videos for Soma (8)
Advertisement ▼