The story would be difficult to call Epic if it wasn’t for the characters. Dragon Age truly features some of the best dialogue and voice acting in the genre where those elements are crucial to the experience. In comparison to Mass Effect, where I often could not help but skip some dialogue, the personalities and dialogue trees in Origins are actually worth listening to. They are well-written, edited for just the right amount of length, and delivered without wasting any time. Depending on your choices in the game and what character you created, the NPCs you meet along the way are all interesting and engaging. It is somewhat easy to spot the characters who could potentially become your party members – they are often met by odd circumstances and nearly outright you are given an option to recruit them. The party members will remain with you for the rest of the game, unless you make some tough choices they do not agree with – at which point they may leave or even become hostile at key points of the plot. When adventuring, you can bring three companions and they will provide unique dialogue depending on the situation you are in. Even the short conversations they have amongst one another while you run around the country side are often worth a chuckle and a pause to listen to. If you prefer something more personal, you can visit your party camp where you are “solo” and free to talk to any of your recruited comrades individually to gain their approval, learn their back story or even give gifts. There is a numerical indicator in the game of what your party members think of you, though this doesn’t affect the gameplay at all unless they hate you completely or love you. You’ll meet plenty of companions along the way, most you are able to refuse to join your party but do so at your own risk – sometimes the new companions come with nice spells and great armor sets, along with unexpected story results later on. 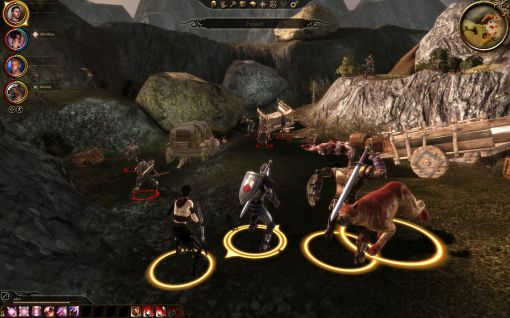 Ambushes are never fun
The burning question for a lot of folks was “Is this a true spiritual successor to Baldur’s Gate II”? Well, I am unfortunately unable to answer that because it is all dependant on taste. For me, I avoid drawing the line between games claiming to be “spiritual successors” because that simply means the game borrows some key elements from the original, but contains most of the new elements. So if you are looking for Baldur’s Gate III only, you should just keep waiting because Dragon Age is its own game. The core of the game that isn’t based around character interactions and story progression is combat. And to be honest, the game does a great job of balancing the combat with the conversations, so I cannot call it an “action RPG”. There are a few parts of the game were the designers really let their inner egos go, and created dungeons which you will be exploring for what seems like forever. At some points it even became a grind for me to continue clearing room after room of spawning bad guys while adventuring through similar-looking caves and corridors for almost an hour. Sounds like heaven for some, but it did get brutally repetitive at a few sections and I really started to miss the other big part of the game – conversations and plot progression. So just be aware that a few sections will either have you thrilled to be killing yet another room of bad guys, or bored to tears because you haven’t seen a non-hostile NPC for such a long time. Dragon Age does try to keep the combat very engaging and fun though, with melee characters often performing brutal finishing moves on the enemy that approaches its death. The downside is that you will likely miss a lot of these cool takedowns because you will be too busy juggling the rest of your party and zoomed out a bit far to make out what just happened.
Prev1234Next