In essence, Dragon Age is a great RPG from the genre masters BioWare who take the game back to the Dungeons and Dragons lore of times past. Recent efforts of the developer saw us in space with Mass Effect, which was a unique change of pace for the genre but definitely lacked some of the hardcore aspects that fans of RPGs love to have. With Dragon Age, BioWare goes back to the dungeons they first mastered years ago with Neverwinter Nights and its sequel, and they do so with vast success. Not only does Origins have all the stats, character progression and brutal difficulty demanded by the hardcore, it also possesses great accessibility and mostly well-scaled difficulty for newcomers. Disregarding the genre, the story and characters of the game are also worth the price of admission. Simply put, Dragon Age is a fun RPG title with a few little quirks that most players will be able to oversee and enjoy the ride. 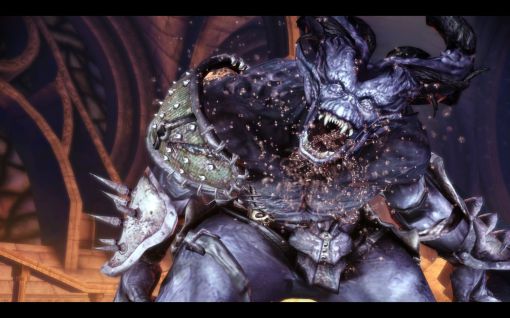 He looks dangerous. And yes, he is in your way.
Dragon Age Origins takes place during the Middle Ages with all the customary heroes, villains, dragons and witches. It is far from original, but this setting has become something of a requirement for classic RPG titles, so it would surprise me if players were expected anything different. You begin by creating your character and progressing through one of the six available “origin” stories. These are less than an hour long, meant to adjust you to the story of your people and set the motivations for the rest of the game. The origin stories are those of Human Noble, Human/Elf Mage, Dalish Elf, City Elf, Dwarf Commoner and Dwarf Noble. Depending on what character you create determines how NPCs react to you throughout the game. To keep things balanced, BioWare threw in a few subtle sub-plot differences and conversational outcomes, but regardless of the character choice, a vast majority of the game will remain open to you for quests and NPC interactions. Once you complete the initial story, you arrive at the main plot of the game – Duncan, one of the famous Grey Wardens, has come to summon you to join them in the fight against the Blight – a vicious attack by the monsters from the underground called the Darkspawn. The Blight has already happened hundreds of years ago, where the Darkspawn were defeated at the hands of the Wardens – but now they have unexpectedly returned, and the Wardens urgently need more recruits. At a key battle against the invaders, however, one of the human kings involved decides to pull out his army and leave the Wardens to die. This sets up the main story plot – you spend the game gathering forces to fight against the Darkspawn as they did together many years ago, while also trying to escape the assassins sent by the rogue King who wishes to remain independent during the war and grab as much land as he can from the neighboring kingdoms. And so you set off on an adventure to unite four factions, each with their own needs, laws, cultures and leaders, to stand together against the Blight. This is the main story piece that holds the game together, and yes it can be considered linear from this standpoint, as some factions must be helped before others agree to lift a finger. Each faction’s area is full of secondary quests however, which you are free to complete in any order and at any time. The choices you make in the game have some branching results but things all turn out pretty much the same in the end. There is no explicit Good/Evil indicator in the game or in the dialogue, but you can sometimes clearly see the nice thing to say is, and what isn’t.
1234Next