Video games are no strangers to the fiction of post-apocalyptic worlds. In a sense, it’s the perfect setup that offers a broad “what if” scenario. If a catastrophe did occur, would it spell the end of humanity or would we find a way to adapt? And if so, would the survivors band together to rebuild a better tomorrow, or would social barriers continue to live on? In Gatling Goat Studios’ Traverser, the sun has died out, and the remnants of humanity have been forced to flee underground. It becomes very clear early on that there is a large divide between these survivors, but unfortunately, the time spent investigating Traverser’s universe is relatively short. 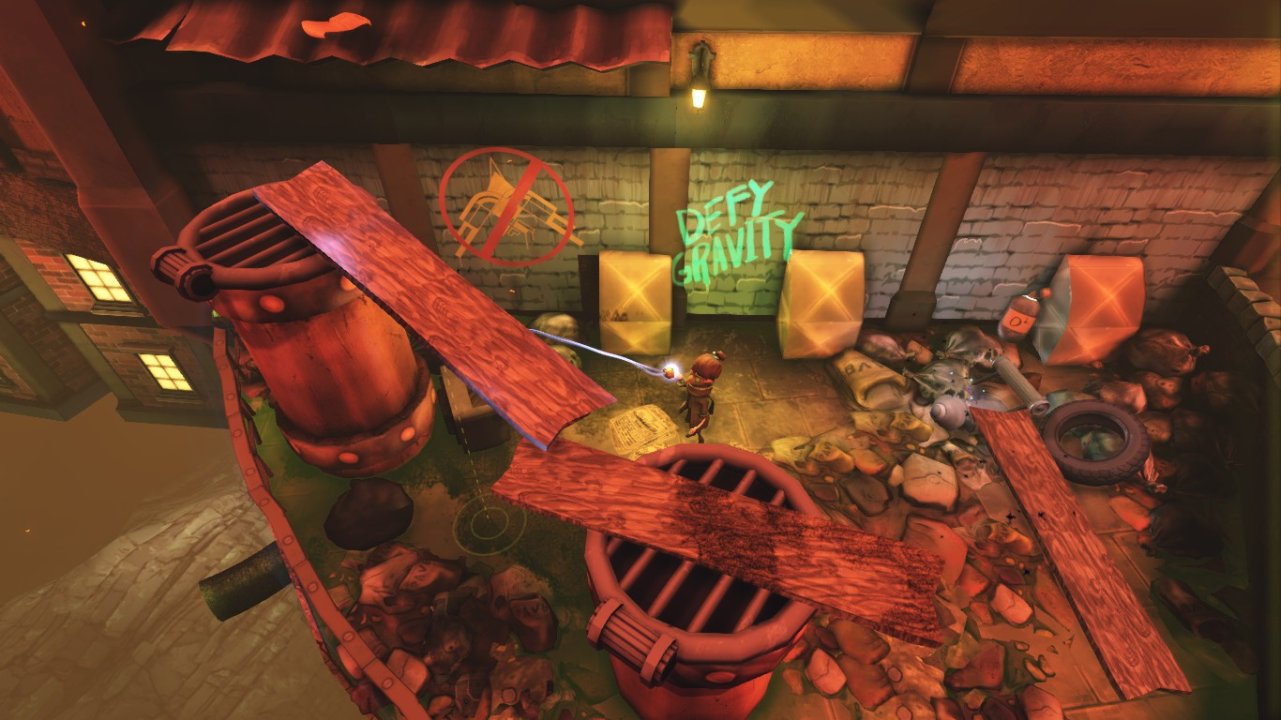 Playing from a third-person isometric view, Traverser is an action-adventure puzzler that makes use of gravity to overcome obstacles. The plot follows a young girl named Valerie as she searches for her father’s whereabouts after his suspicious disappearance. Early on in the game, Valerie passes her test to become a Traverser, which is a sort of peacekeeper between the two defined social classes. Under her new title, Valerie carries a special gravity glove that possesses the power to pick up and manipulate most objects with ease. She can also travel between Brimstone’s Upper and Lower city, which is where the game takes place, using special jump pads whereas most other citizens are restricted to their respective cities through the manipulation of gravity.

Sporting a steampunk aesthetic, Brimstone has become the last bastion for those living underground. Thanks to gravitational enhancements, people can live on both the upper and lower parts of the landmass, but it’s created a social gap between the two groups. Upper City is home to those of higher stature and wealth and is also where the Raven Corporation, who control the now precious commodity of oxygen, is based. Meanwhile, in complete contrast, Lower City is a downtrodden slum, where the lower class struggle to stay alive. Essentially it’s a case of the higher ups receiving more oxygen than they need while the poor have to resort to wearing oxygen masks for survival. While Traverser’s backstory and introduction set the stage for an enticing idea, the story does not evolve much as the game progresses, and instead leaves a lot to be desired.

The overall atmosphere remains very ominous and sinister throughout, and you can feel that things are going awry. It’s almost like an unsettling peace that has far more weight in being perceived than real. It’s for that reason, mixed with the interesting backstory that makes it disappointing that the game’s narrative lacks depth. The game’s relatively short length of about four hours hampers this a bit, but so does the fact that the collectibles offer up only a tiny picture of what this world is like. More than anything else, I feel that Traverser missed an opportunity to tell a great story based on the very interesting scenario that it built. 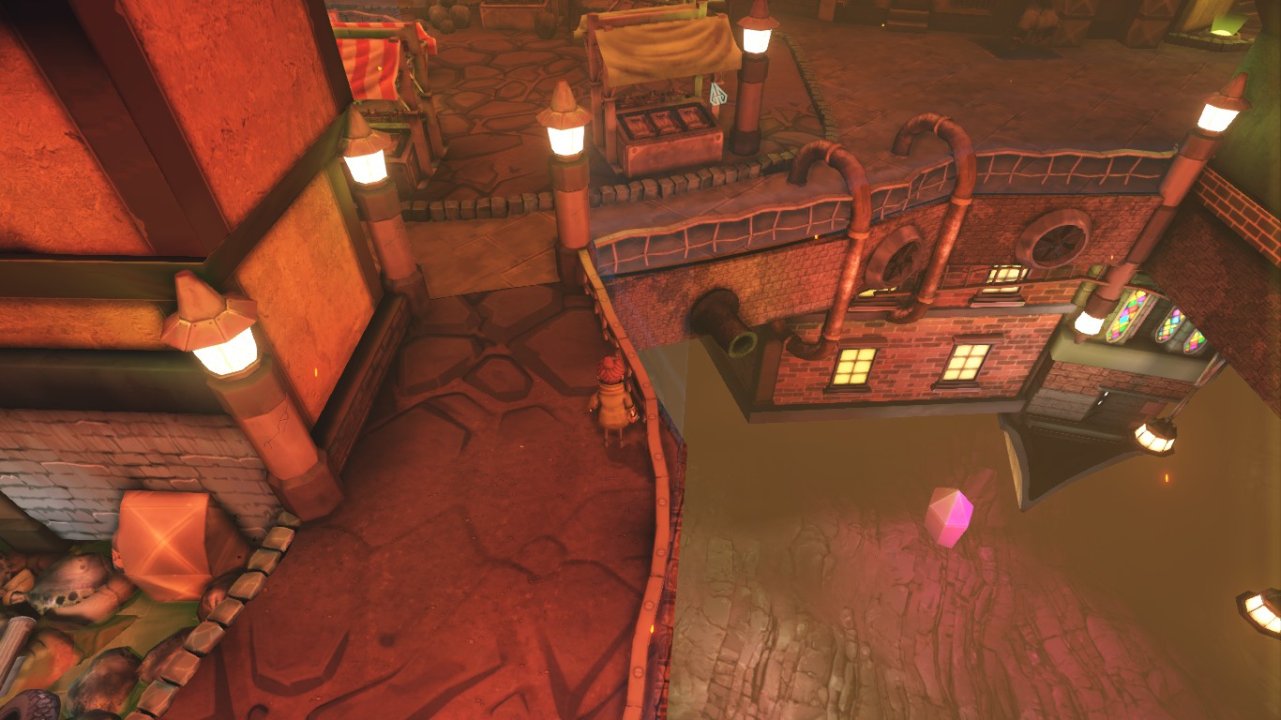 As Valerie progresses through upper and lower Brimstone, she encounters a variety of puzzles to solve. They are all relatively simple in nature but put specific importance on making use of Valerie’s gravity glove. One situation may call for creating a staircase out of boxes while another requires you to gather up and assemble pieces of pipe to raise the level of sewer sludge. At times, this also extends towards gathering those collectibles, as manipulating the environment is the only way to reach them. There are only sporadic moments where this happens outside of defined puzzle sections, but it does help to make the world feel more than just a bolted down environment.

While there is an array in terms of the obstacles you’ll encounter, they never seem to break away from that initial simplicity. Even when considering the occasional boss battles, there is no real challenge to overcome or feeling of success to be had. The gravity glove doesn’t receive any sort of modifications or upgrades, so there is never a sense of mastering a new ability to defeat these challenges. Using the gravity glove itself can also feel clunky to control, as you press and hold the left mouse button to grab the object, the scroll wheel to levitate it up and down, and the right mouse button to rotate it. The game’s fixed camera also creates some issues, especially in tighter spaces when it becomes difficult to judge if objects you move are actually being placed how you want them.

The game’s better sequences are those that deal with its stealth gameplay. Whether it’s the normal sneaking around or making use of large barrels to fool guards, taking the silent route often felt like a perfect fit for the game’s mood. This becomes hampered in the cases where guards seemingly spot Valerie through walls or other obstacles. Since Valerie’s only means of fighting back are lobbing objects at guards with the gravity gun to stun them, the only real option is to flee the area. This only happened occasionally, but when it did, it tended to ruin the whole sequence. 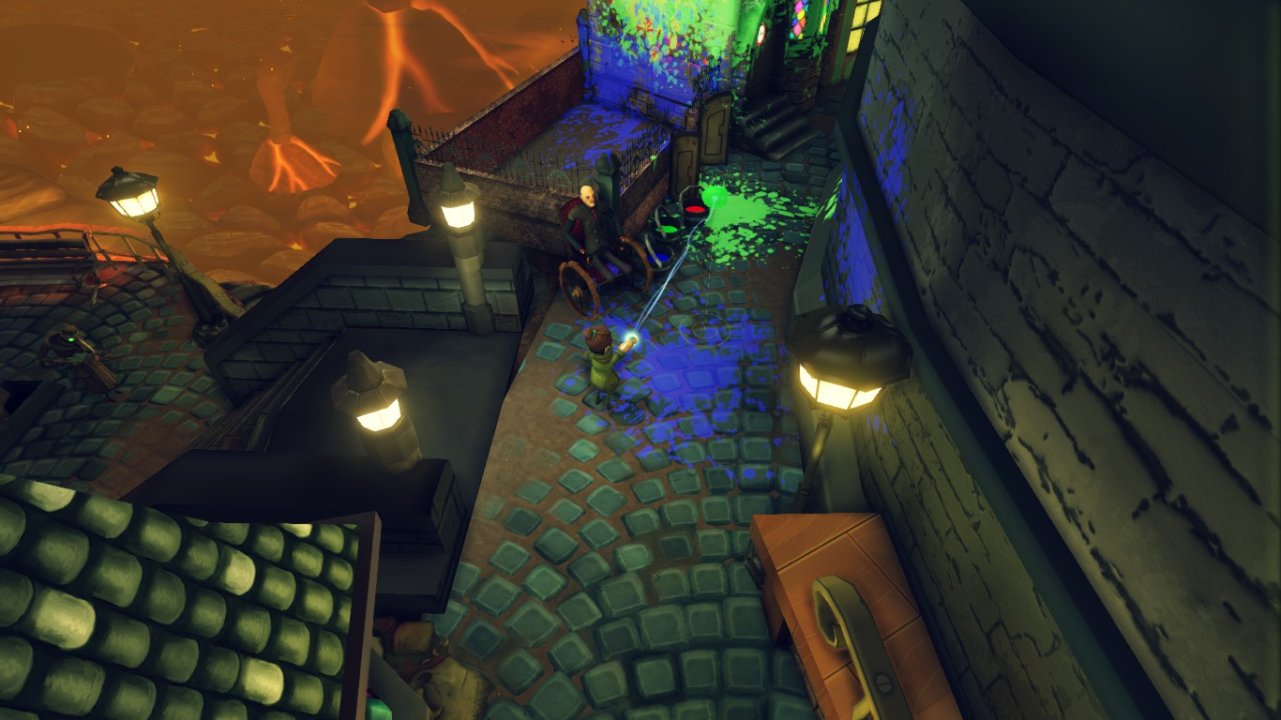 While Traverser’s gameplay is lacking, the look, feel, and overall presentation are the game’s greatest strengths by far. The steampunk look nails that ominous and dark tone, while also helping to portray the steep contrast between upper and lower Brimstone. The city itself is surrounded by jagged stalactites, deep caverns, and a sea of lava ever so looming below that hammers home the reality of the new every day surroundings. Traverser’s soundtrack also plays in well to its art style, providing dark and ominous tones to match the mood, but also transitioning appropriately to the more lighthearted moments.

Traverser left me thinking of what could have been. For something that has such a strong premise and a great atmosphere, it’s a shame that the world wasn’t fleshed out more with a deeper backstory and plot. The gameplay doesn’t offer up much of a challenge, whether at the beginning or gradually building up to the end, and the awkward controls for the gravity glove lead to some annoyances. Ultimately, Traverser fell just short of being something really special.

Our ratings for Traverser on PC out of 100 (Ratings FAQ)
Presentation
80
The game takes place on a post-apocalyptic underground landmass that has its citizens living on both the top and bottom of it thanks to gravitational manipulation. The steampunk aesthetic mixes well with an ominous and sinister atmosphere. Traverser’s presentation is by far its best quality.
Gameplay
55
The puzzles offer very little challenge, as do the few boss battles. Some of the controls, especially for the gravity glove, feel very awkward at times. Stealth is the highlight of the gameplay, but has issues of its own.
Single Player
65
The premise and narrative start strong but fade as the game progresses due to a lack of depth and development. Clocking in at about four hours and without much replay value, most will speed through Traverser relatively quickly.
Multiplayer
NR
None
Performance
83
Very few hiccups that disrupt the actual flow of the game, but Valerie does get stuck on quite a few physical objects. The few loading screens in the game are kept very short.
Overall
63
Despite having an enticing backstory and atmosphere, Traverser falls short of creating a truly memorable adventure.