With the rise of easy digital distribution platforms, the indie scene has enjoyed a resurgence in recent years. And it's not just the smaller studios that have benefitted from easier exposure and direct communication with their fans - some independent creators and tiny teams of just five or less have been able to create new games and experiences all on their own. These examples include the oft-mentioned successes of The Stanley Parable and Gone Home, but also mis-steps like 4PM. The latest title that comes from an experienced game designer trying to create his own passion project is Her Story, a game by Sam Barlow. 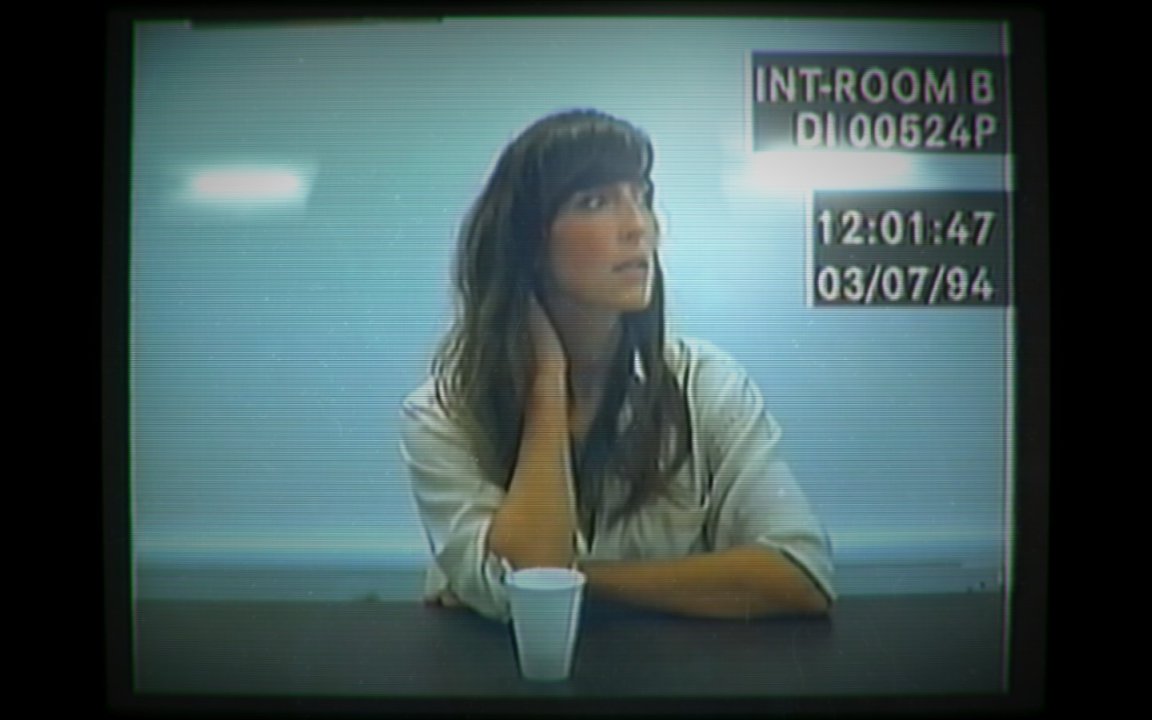 The setup of Her Story is simple yet original. You're a detective, who has been granted access to a Police computer. Throughout the whole game, you'll be looking at this PC screen, which comes complete with a desktop interface. The screen itself even has reflections and glare from objects supposedly behind you. This effect, though cool, can be distracting and can thankfully be turned off. The computer interface itself is fairly simple - you have a couple of text files to read, and a police database tool to work with.

The text files explain that there's been a disaster event, in which a lot of archive video footage has been lost. Your job is to reconstruct a series of police video interviews about a murder case. The tool that you'll be using can find video clips based on key words that can be heard in the videos. The videos of detectives asking questions are missing, so the only clips you'll be working with are the responses of the suspect. The clips are anywhere between a few seconds to a few minutes long, and presented in perfectly stylized 90s VHS videos.

The case focuses on a young woman played by Viva Seifert. The game starts you off with a single query of the video database - "murder". By watching the resulting videos, you'll begin to get an understanding of the case and begin to build a testimony in your head. From a pure gameplay perspective, Her Story is a puzzle game with two main elements. You have to find as many video clips as possible, and put them in correct order for the sake of reconstructing the complete plot (or as complete as it can be). The latter task is easy, as all videos come with a handy date and time stamp, so dragging them down to your timeline and re-arranging is fairly straightforward. 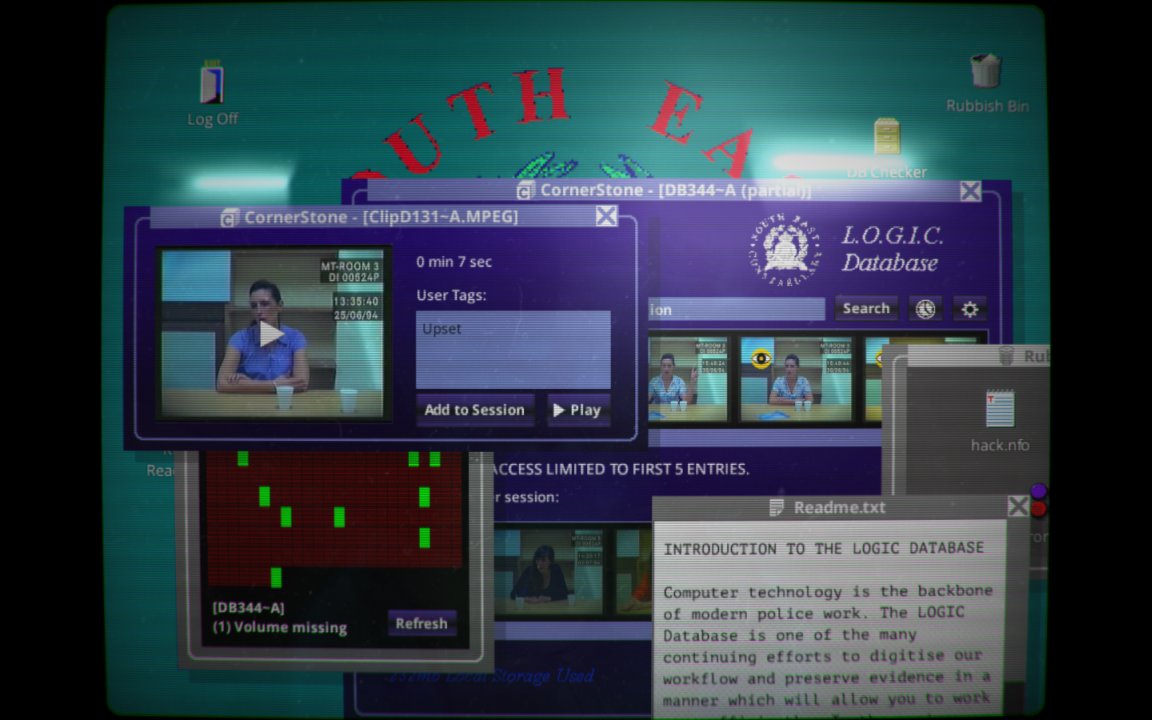 It's finding the videos that is the real challenge. Her Story will truly make players feel like a detective. Starting off with the initial series of videos, you'll inevitably have tons of questions running through your mind - who is this woman, who was actually murdered, how, when, where, and so on. With each search, the video results will be produced. But there is another layer to this puzzle - the video results are limited to 5, with the game telling you if more were found. To reach those other videos, you'll need to narrow your search by adding multiple keywords. "Murder" may produce 10 videos, but only first 5 will be visible, so to reach more you'll start trying to search for "murder weapon" or "murder motive". Helpfully, the program keeps a history of your searches.

And as you begin to enter these search queries, you'll hopefully get results. You'll find yourself reaching for pen and paper, taking notes and highlighting potential terms to search for in the next round. The game does a great job of mixing up the videos - some will provide a ton of potential hints, while others are seemingly just there to distract. You'll chase leads down dead ends, be intrigued by every potential detail and piece of information, and rejoice when a new video is found through your query. Although, on the flip side, some players may come across crucial plot-revealing videos by accident or very early on - thus making the rest of the game anticlimactic.

While pulling at these various strings, trying to untangle the narrative knot, you'll realize that despite the videos being in chronological order, things change as the interviews go on for days. Much like a real police procedural, the suspects don't reveal all important information at the start, and it is only later when the man behind the camera asked the right questions do you find clips that contain the truth.

Any clips you haven't seen yet are helpfully tagged with an icon, so it's a joy to discover a new video and more information. Clips can also be tagged with your own text for later searches. There are over 250 clips in total, and while finding them all would be immensely satisfying, it's not necessarily required. There is no concrete ending - even as you watch all videos in order to the end, there is a certain amount of ambiguity that will remain. There is no clip of a finale, no final revelation (although the final series of interviews does expose the majority of the details). The ending is rather open to player interpretation. 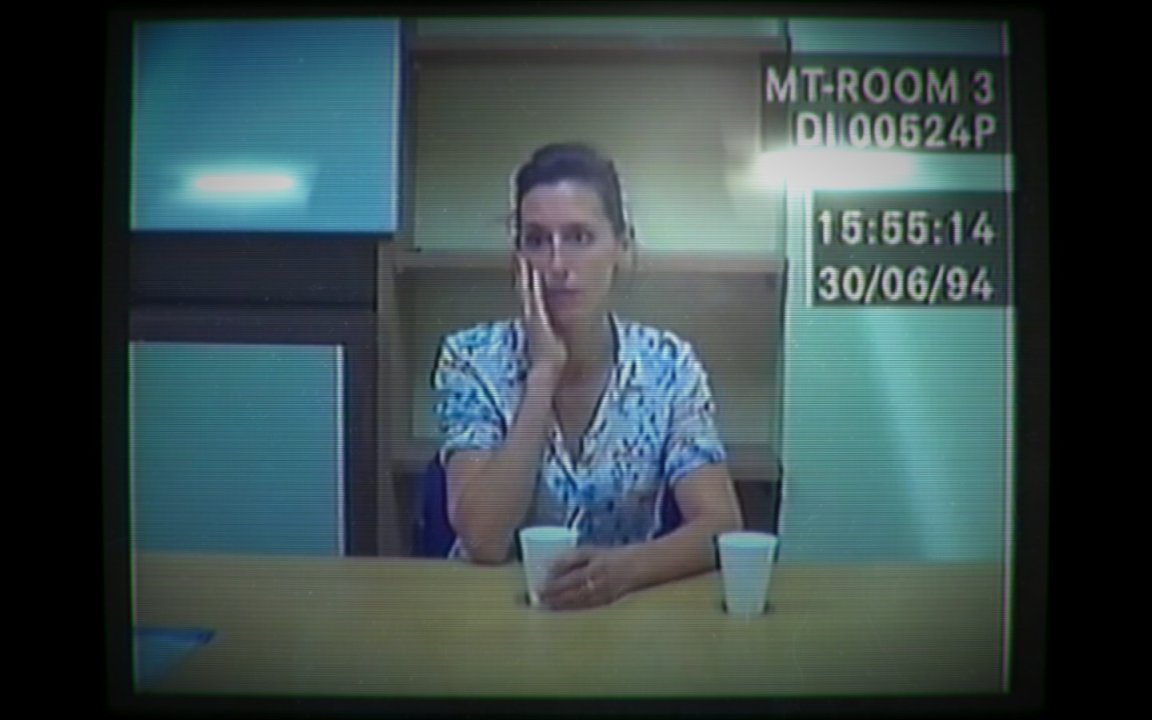 Her Story is a game that tells an intriguing and personal tale of murder, love, and relationships. Despite having just one actor, there is a twist that makes the whole thing feel a lot more dynamic that it seems at first glance. The videos themselves are even interconnected - events occur between the times that each interview series takes place, and are key to solving the whole thing. To say any more would be to spoil things. Without a doubt, the game is worth experiencing just for the story alone.

In fact, the story is so engaging, the gameplay aspects sometimes feel like they get in the way. Players may be faced with a situation where they're stuck and unsure of what term to search for next to discover a new video. Putting the videos on your timeline can be cumbersome because of the awkward user interface. Sometimes, the icon that marks unwatched videos did not clear. And even if you have everything pieced together, there is no way to simply watch all videos in order, instead you must go through them one by one manually. All of these gameplay elements actually take away from the intensity and drama of the tale, so it's highly recommended that, once you've completed the game, you go on YouTube or to the video folder of the game and watch the whole thing uninterrupted. The story should be experienced in one go, so you can truly appreciate the narrative and the buildup of the case.

As mentioned at the start, the game's presentation is firmly rooted in the 90s . From the classic Windows95-like interface to the VHS visual style of the videos, the immersion that Her Story creates is quite believable. The sole actress Viva Seifert does a good job of making the whole experience feel authentic, and doing so is no easy task given the story - but again, to say more would be to spoil things. The audio design is an unexpected highlight - from the subtle background noises of a police station to the surprisingly excellent and touching music score, it all comes together really well. 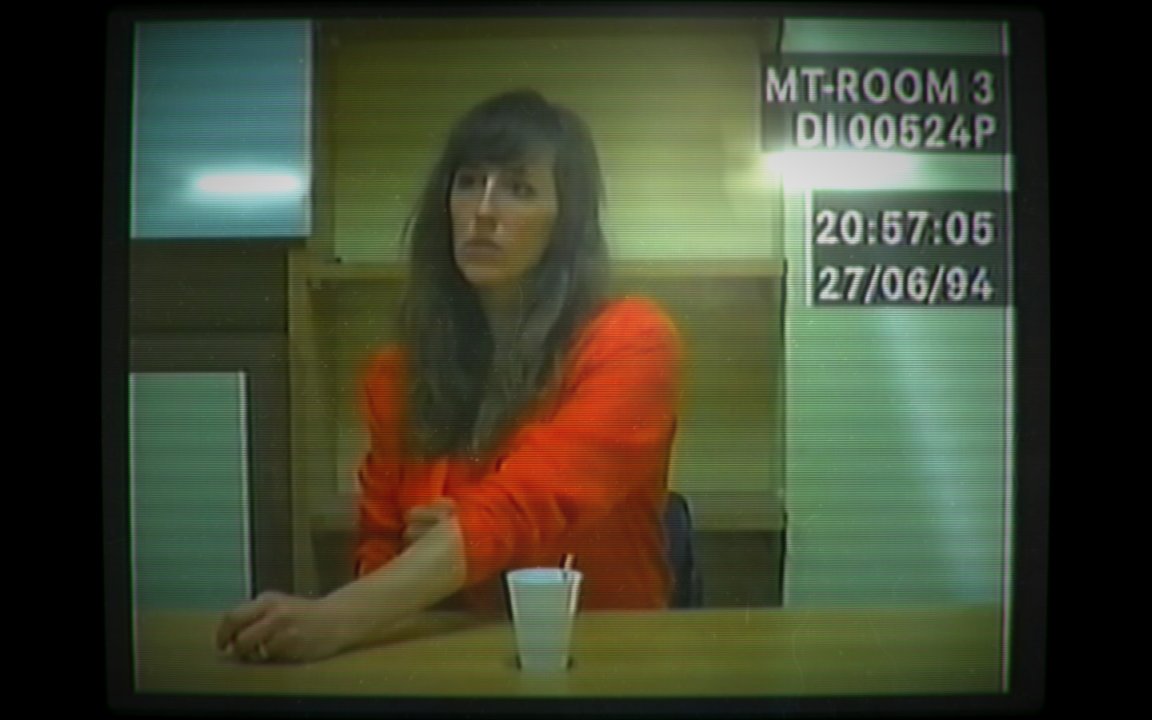 Her Story is a new release, yet it has the vibes of a strong throwback to the 90s. The visuals, from the user interface to the videos themselves, create an atmosphere of adventure games that used FMV and were popular 20 years ago. The gameplay is highly engaging, making you feel like a real detective putting a case together from the archives. Though the occasionally clumsy tool makes handling videos a chore, the triumphs and thrills of discovering new hints never gets old. With a very strong and well-acted narrative, it's highly advisable to watch the whole thing in order and without interruption once you've completed the case, because the game sadly doesn't offer this option. Whether or not you enjoy Her Story depends entirely on if you find the concept appealing. But for a relatively low asking price, the game is well worth a look even if you're just curious.

Our ratings for Her Story on PC out of 100 (Ratings FAQ)
Presentation
82
The game is very bare-bones, but it still manages to create a nice atmosphere and immerse you in the video archives as if you were a real detective. The sound design and music are surprisingly great.
Gameplay
80
As a puzzle game, Her Story is both engaging and fairly unique. However, there are annoyances with the user interface and some players may discover all the story twists too early.
Single Player
88
The story being told is interesting, personal, and the ending will leave you wondering if the case was truly ever solved.
Multiplayer
NR
None
Performance
(Show PC Specs)
CPU: Intel Core i5-4670K @ 3.80 GHz
GPU: ASUS Radeon R9 280X DirectCU II
RAM: 16GB DDR3
OS: Windows 7 Professional 64-bit

80
Make sure you have the right video codec on your PC to watch the videos. To truly experience it, you should watch the videos in order and uninterrupted - sadly the game doesn't offer a way to do that.
Overall
82
Her Story is an enjoyable puzzle game that tells an engaging story. Despite a few minor complaints, it's worth checking out, thanks to the low price. 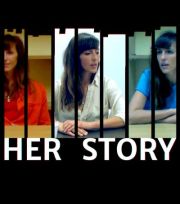