Gather around the kerosene lamp, and just ignore those tentacles in the water

“Will I like Sunless Sea?” A friend of mine asked, when he heard I was playing it.

“Well… it depends on if you can handle its quirks. For example, imagine a game where instead of gaining experience, you gained secrets from around the world. Imagine an RPG with stats more along the lines of ‘Spirit’ or ‘Delicacy’ than, say, ‘Strength’ and ‘Dexterity’. If you like the sound of that, you might like the game.”

“Hmmm. But I don’t like the sound of that,” he replied, and I suddenly realized that there was nothing more I could say, because Sunless Sea sells itself (by the seashore?) on its unique approach to world building. It’s a game focused on quality writing and an intriguing environment rather than, say, good gameplay. But let’s not sink into that mire just yet.

The world of Sunless Sea takes place in the already-established setting of Fallen London, but never fear: you don’t have to have played Echo Bazaar in order to fully enjoy the game. There are no static characters for you to be aware of or basic society to understand: it’s just a deep, dark, twisted, dirty little steampunk setting. Even after playing several hours of the game, I only have a misty grasp of the backstory, but that’s actually a very fitting achievement. London has fallen. Where? Underground. Onto a vast, dark ocean, speckled with islands. It’s not your business to question how this happened: your business is, well, business! Get out there, establish some trade routes, and build up a fortune.

Let’s get one thing straight: this world is delightful. It’s a horror setting, alright, but it’s not the gritty, dystopian horror that we’ve all started to grow sick of. Rather, it’s the intriguing sort of horror, the kind of horror where you’re eager to push through the mist to find whatever twisted monoliths were left behind by the savages. The kind of horror that verges on adventure, and where even if there are monsters, there’s a good chance that black powder and brass horns will scare them off. The waters of the Sunless Sea are dotted with islands where each port has a distinct and unique flavor, making discovery and exploration a true joy. You’ll remember discovering that one port by the volcano, or that one port overshadowed by colossal statues, or that port surrounded by giant spider webs. Sunless Sea has got a firm grip on ‘show, don’t tell’, and most of your understanding of these strange lands will have to come to you the same way it comes to any ship’s captain: just sell your goods, and see what the locals have to say or do. 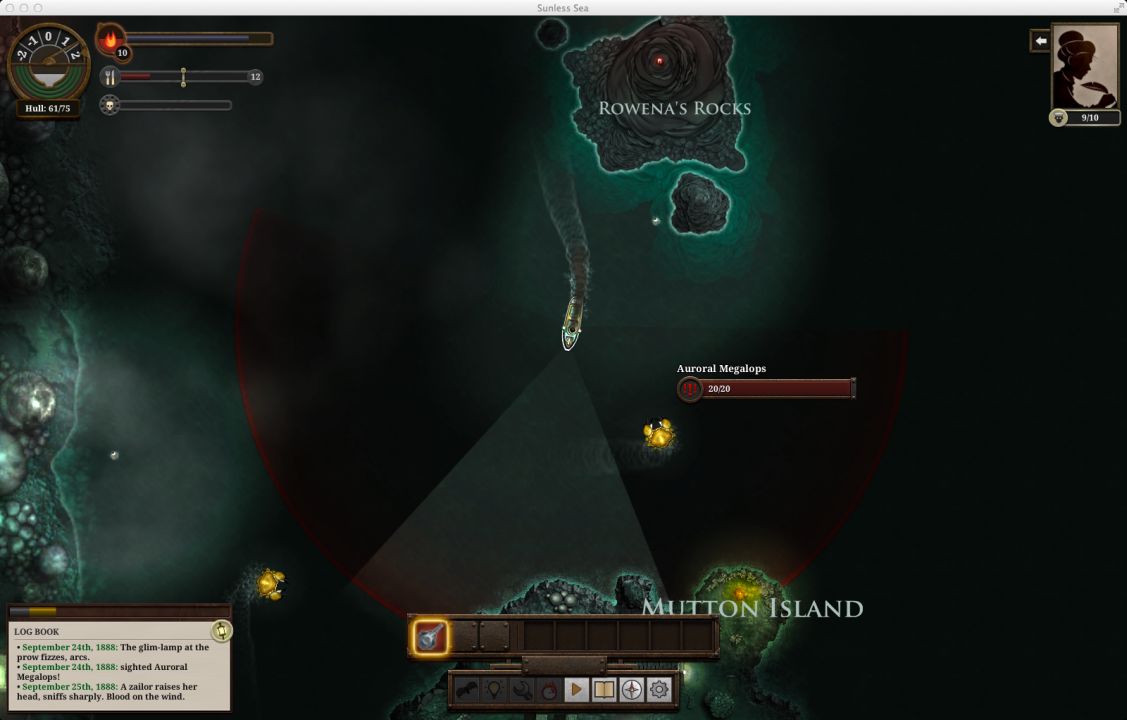 A helpless giant crab, you say? Fire up the cannons!

This is delicious fare, but it’s not for those who can’t stomach quite a bit of text reading. Sunless Sea proudly emphasizes its writing, and although there’s no official story, and very few recurring characters, the descriptions and delicious variety to be found in the world truly is inspiring. Entering ports will often trigger random encounters, and your current stats will determine not only the options available to you, but also your chance of succeeding in the various challenges presented. For example, you might occasionally try to bribe your way past the customs officials, but if your skills of deception are high enough, you might feel comfortable simply smuggling your contraband under their mustachioed noses. Sunless Sea also implements an admittedly interesting method of stat-keeping: aside from your main five stats (Hearts, Mirrors, Iron, Veils, and Pages), nearly every key aspect of your character is measured by a separate checkable stat. For example, your ‘suspicion’ with each and every guild is recorded, as is your ‘renown’ with the higher officials you work for. Your ship can carry commodities like “Rumors” or “News”, and of course, the principle measurement of experience is “Secrets”. These oddball stats bring a lovely flavor to the experience, and even more so in that they can’t be directly linked to the more tradition set of stats (like HP, Intelligence, Dexterity, etc).

Unfortunately, Sunless Sea comes to the table with a hulking, smelly piece of baggage on its back: the traversal system. Just to keep things paradoxical, I can only begin by describing all the good points of this system. Don’t worry: the boom will be lowered soon enough. The developers at Failbetter Games have put honest effort into making this traversal interesting, most of all in the ‘Terror’ quality. When out to sea, far from land, your ship slowly begins to fill up a Terror ticker. Get eight or so tickmarks, and you’ll add one point of Terror to your total. Get over 100 Terror, and your crew will fall into madness. But thankfully, as long as you hug the coast or stay in well-lit areas, your Terror won’t increase. This alone makes a solid stride towards making the traversal bearable, because even at a slow pace, you’ve got to cleverly plan out your route so as to avoid dark areas, detour towards lit buoys, and swerve to stay in lighthouse beams. The second improvement that adds nice flavor to the traversal is the real-time combat. Enemies can only fire from certain angles, so a clever navigator can outmaneuver or outrun threats through wits alone. Making the decision to cut across a dark area of sea in order to avoid those pirates - trading damage for Terror - is just the sort of thing that makes for good gameplay. 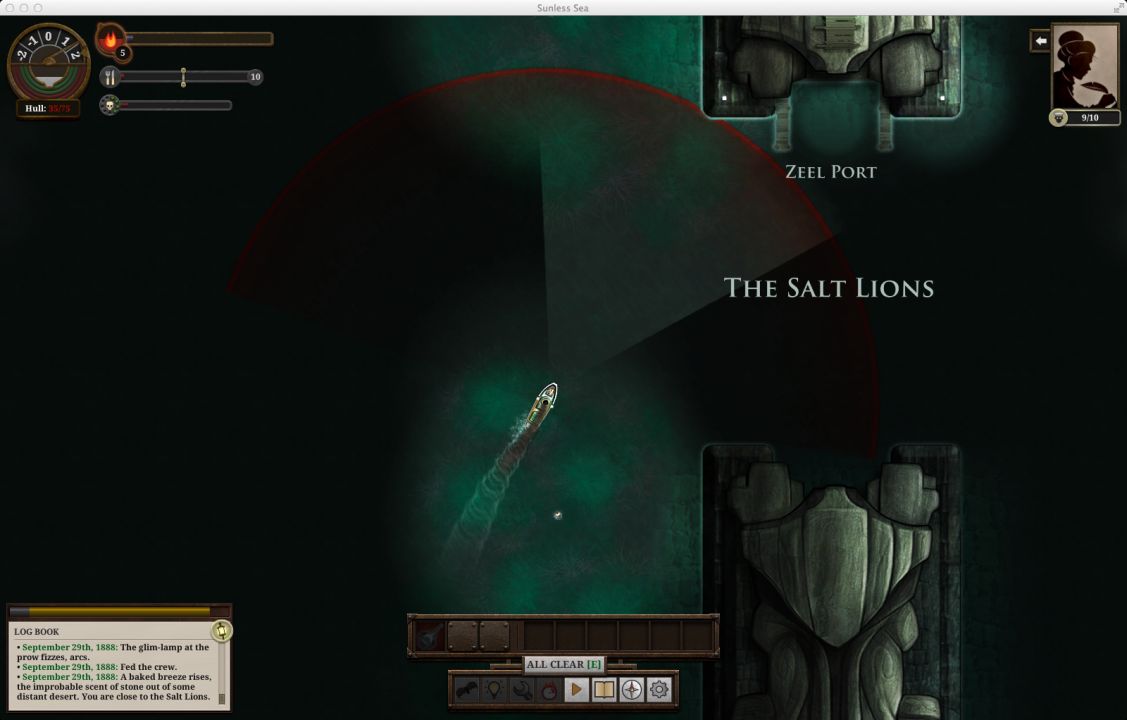 Some islands are made by nature, some by man, and some by… something else

Sadly, even these efforts are not enough to stop the traversal system from being a real stinker. It’s just… too.... slow. Start a mission to a far-away island, and you’ll spend 90% of your time slowly putt-putt-putting around reefs and shoals until you can get there. You’ll pick up your cargo, and then slowly putt-putt-putt all the way back the way you came. If you’re like me, you’ll even open up a browser window so you can find something to do to keep you entertained. It’s the kind of situation that makes you baffled to discover that any of your housekeeping items (like managing crew, checking cargo, etc) will pause the main travel screen, making sure that you never miss out on a single moment of your slow, leisurely trip onward. If the housekeeping had been able to be executed simultaneously, this alone would’ve made for a drastic improvement, as you’d easily get caught between the boredom of your backtracking voyage, and the risk that getting distracted might make you run into an enemy crab monster. But as it is, trips very quickly become boring, and worst of all, are the central focus of gameplay. In-port decisions are fairly limited to dialogue trees, which may indeed be very well written, but in the end mean most of your time in game will be spent on the more dreary and pointless task: traversal. The quest structure certainly doesn’t help this at all: London is the hub of nearly every profitable quest, as well as the only location with practical repair and restock abilities. This means that every single mission, every single slow, meandering journey, exits London and then returns right back.

I can’t help but compare this game to a little-known gem from the 90s: Escape Velocity. There too, you played a merchant, just trying to explore the strange and interesting world (although this time of the Milky Way, rather than the deep blue sea). But here, the difference was that there were several different towns that could reasonably act as hubs. You might start off at Earth, but once you realized that, say, the Centaurians had just as many fetch-em quests as your home planet, you’d have a new homebase to keep you entertained. In Sunless Sea, there is only London. Out from London, straight back to London. Slowly, slowly out… and then slowly, slowly back. If the monotony doesn’t get to you straight away, it will as soon as you realize that there are only two or three sources of truly profitable quests, that they are always fetch quests, and that they only select from a limited pool of destinations. Slowly, slowly out to your destination… slowly, slowly straight back. No side-questing, and no distractions. It’s enough to kill the game. 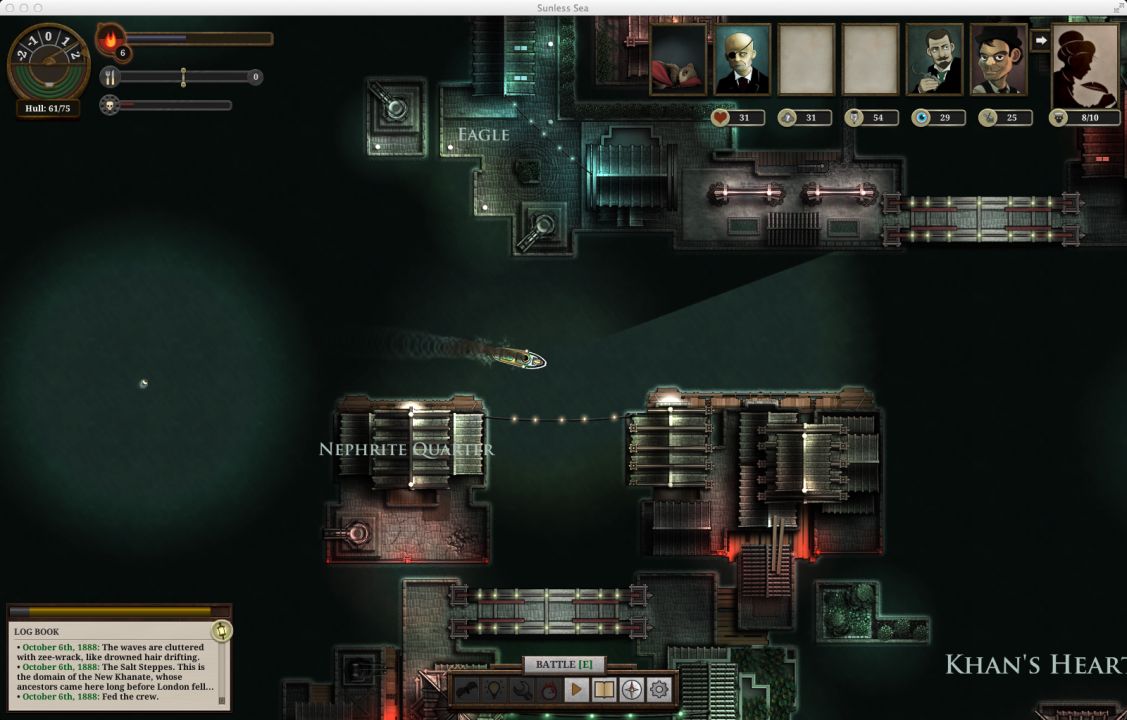 Judging by the gunnery, I’ll wager they don’t take kindly to foreigners

Sunless Sea wants to sell itself on atmosphere, but atmosphere alone probably isn’t enough to justify the $20 price tag. I’ve heard other players describe this game as ‘a complete and well-balanced RPG’, but for the life of me, I can’t figure out what they’ve been playing. Sunless Sea only recently came out of early access, but it feels like it should’ve stayed brewing for a little while longer.

Our ratings for Sunless Sea on PC out of 100 (Ratings FAQ)
Presentation
86
It's a beautiful world that begs for exploration, and in the many text boxes, the descriptions truly do shine through.
Gameplay
60
At first, the slow trips through the darkness are amusing. Eventually, they become mind-numbing.
Single Player
68
For a game focused on writing, there’s surprisingly little story here.
Multiplayer
NR
None
Performance
90
The game runs without a hitch.
Overall
68
Sunless Sea truly does capture what it must feel like to be a ship’s captain on a dark underground ocean - sometimes it feels exciting and wondrous, but usually it feels lethargic and dreary. I should’ve stayed in London and became a shopkeeper. 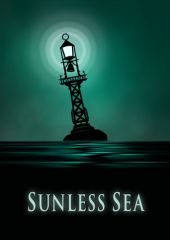