Ain't she a beautiful sight?

When civilization collapses and we're all forced to lick the insides of discarded bottle caps for hydration, you can guarantee with reasonable certainty that I won't last for very long. Not because I'm a scrawny programmer with no survival skills whatsoever, or because I'm a massive coward who's naturally averse to doing horrible, inhumane things to stay alive, or because I live on a continent where the wildlife is already enough of a threat before the introduction of a super-mutant virus. Those can all be remedied. No, my downfall will be my inability to drive a rusting ute extremely fast while swerving around the wreckage of a destroyed city, which – if post-apocalyptic fiction is to be believed – is the only way to commute in the sun-blasted wastes. Frankly, it just seems irresponsible, especially when all these bloodthirsty future-tribes could just slow down and take shots at one another from the cover of their parked vehicles. I'm sure it's all terribly exciting in the heat of the moment, but when the fumes and smoke clear and you're left looking at a dozen wrecked automobiles gently smouldering on the side of a cracked, ruined highway, I refuse to believe that somebody wouldn't speak up. “Do we maybe want to consider negotiations more thoroughly next time?” says our vexed observer, played by me. “You'd think we'd value cars a bit more highly, what with the buses not running on time any more. Or, you know, ever.” 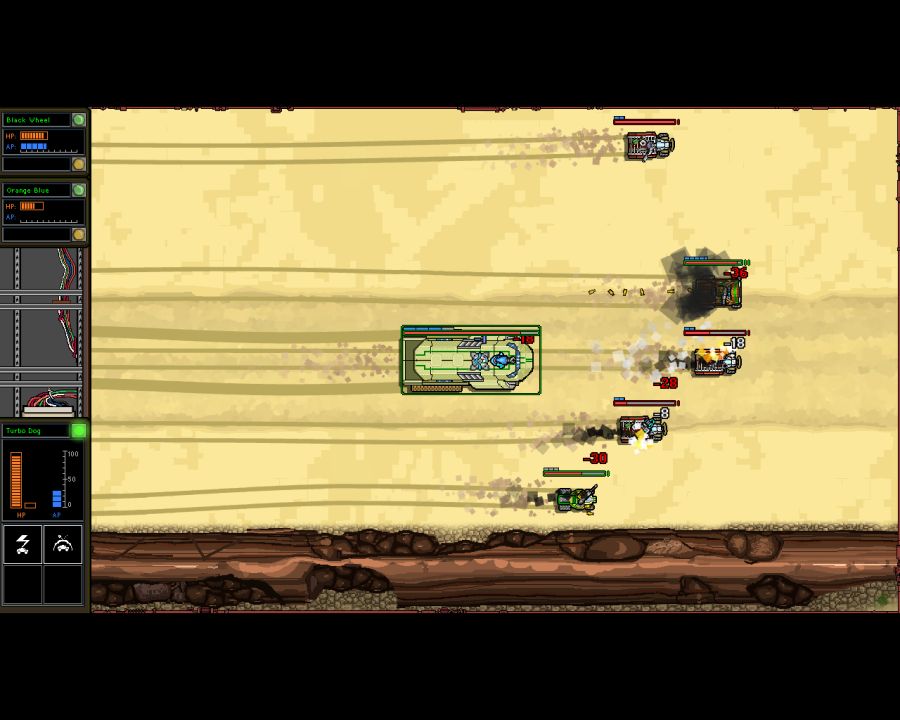 While we ponder this, let's consider Convoy, a game that lets you stop and consider, as your last functioning vehicle drifts inexorably towards a lamp-post, the full extent to which you have royally screwed up in life.

The title screen, if nothing else, sure sells us on the concept pretty well: a smoking, sputtering, sparking spaceship, larger than a skyscraper, rather obtrusively parked smack-dab in the post-apocalyptic equivalent of the CBD and clearly in no state to be going anywhere. Without any local equivalent of a Super Cheap Auto in sight, crash-landing on this backwater planet turns out to be even more problematic than first thought, as you must now venture out into the wasteland with your remaining vehicles and see how you might scrounge up the parts to get yourself back into space. Unfortunately, the three equally-nasty factions dominating the ruined surface are sure to make this no simple errand, and with everybody driving around armed to the teeth with the kind of weapons that would get you disqualified from even the most loosely-regulated destruction derby, there's no way that tour bus and pair of soccer-mum Range Rovers you've picked out are going to survive for long unless you strap every last piece of useful equipment you can find to them. Thus begins a cut-throat journey into a world of vehicular homicide, fuel management, desperate scavenging and dialogue trees. 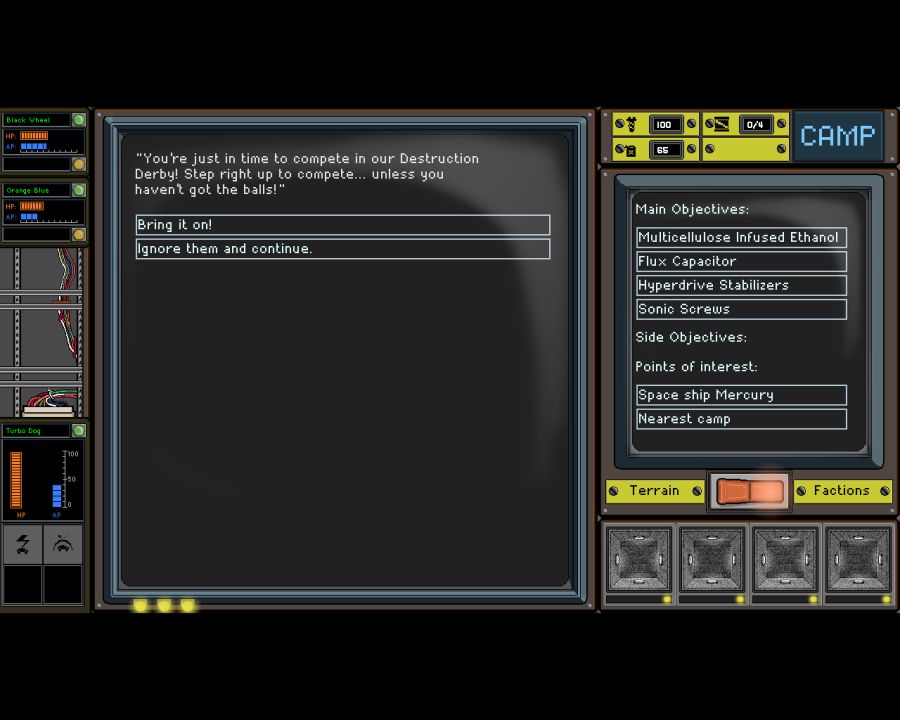 Gameplay-wise you can see Convoy has definitely been looking surreptitiously at FTL's notes, being neatly split between real-time (pause-able) top-down tactical combat, overworld navigation, and scenarios communicated to you via dry text boxes, but with more than enough originality in it to make it feel like a worthwhile take on the formula. The core experience of constant travel interspersed with random encounters is intact, but instead of lounging in a swivel chair during combat shouting things like “target their weapons!” and “divert power to the engine room!” in an authoritative voice, you are put at the helm of the tour bus – or, to use the ever-so exciting name this game gives it, the Main Convoy Vehicle – on a perpetually horizontally scrolling battlefield, and must direct your support vehicles to protect you from whoever it is that wants to see your head impaled on their hood ornament. Travel, too, is notably different, allowing you to click your way freely around the road map rather than instantaneously warping from place to place, and places an emphasis on carefully weighing up the costs of navigating terrain: sure, you could cut straight across that mesa rather than drive through a city teeming with bloodthirsty raiders, but if you do that then your convoy will gulp its way through fuel like a fat child with a chocolate thickshake.

Still, I'm sure that with the benefit of hindsight we can agree that FTL is not a template without its flaws. Cresting the new wave of roguelikes back in 2012, it was the kind of game that would roll a couple of dice, then try convince you with a mischievous glint in its eye that if you concentrated really hard, furrowed your brow and gritted your teeth until they cracked, you could stop them from landing on snake eyes. Some roguelikes put too much power in the hands of the player, while others put too much in the hands of the random number generator, and FTL was most assuredly the latter. Oh, you could develop better techniques, learn how to handle certain attacks, optimize your routes, but at the end of the day a handful of lucky shots could – and very often did – determine if a run ended in a fiery wreck or a smooth victory. One of my numerous measures of a good roguelike is when sufficient skill can override the whims of the dice, but sadly tactical prowess and bravado were rarely enough to save a bad run. Convoy, fortunately, fares a little bit better. Without the threat of a rebel fleet breathing down your neck, you have a little bit more control over when and where you venture forth, and while I certainly wouldn't describe it as forgiving – honestly, who wants that anyway? – runs rarely, if ever, go from 'peachy' to 'sniffing bottles for petrol on the side of the road' with a single unfortunate encounter. You have enough agency in the way you approach things to make the game feel like something you could learn to master, rather than an enormously overcomplicated slot machine, and it's overall far easier to at least get yourself off the ground provided that you know what you're doing. 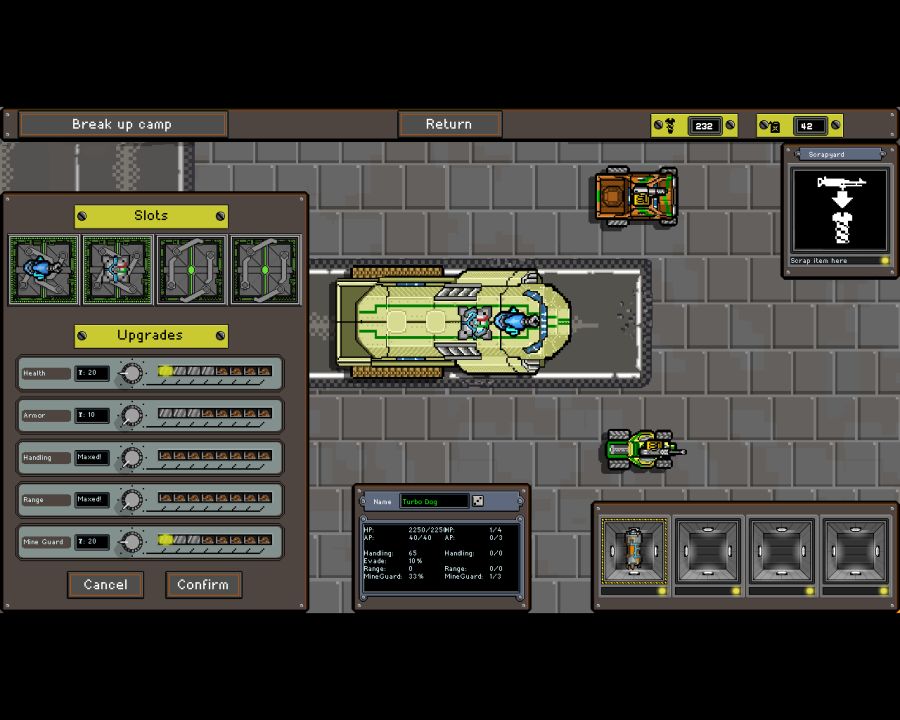 Combat's an interesting beast too, mind. For all intents and purposes it's just a grid-based battlefield, but presenting it as a horizontally scrolling environment adds some clever elements that keep things nice and tense. Hazards can scroll in from the right at any time, from electrical pylons to collapsed overpasses, and a failure to keep an eye on the road ahead – especially if you're too close to the right side of the screen – can mean taking unnecessary damage or even losing vehicles entirely. Conversely, putting self-preservation first and positioning your units too far to the left will almost always mean suffering an endless barrage of mines dropped by the gibbering lunatics who don't. Well-timed shoves can force opponents to suffer the brunt of their allies' attacks or even an approaching rock face, but can easily go horribly wrong if you're off the mark. The environment is a potent weapon, but requires masterful positioning and timing to use well. I can appreciate that.

For the most part, though, you're reliant on guns, which kind of lack the potential for creativity that characterizes a nice visceral ram. Since enemy units will continue to hammer on your Main Convoy Vehicle right up until they die, the only strategy worth a damn for most of the game is to just get all your vehicles to gang up on one enemy at a time in order of decreasing threat. Sure, playing the schoolyard bully of the wastelands is effective, but after the hundredth battle it starts to feel a little bit routine. Sometimes there'll be a ruined Blockbuster or something to opportunistically push them into the path of, or you'll end up overpowered enough to be able to split your resources, but such situations are by far the exception rather than the rule. 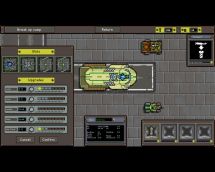