THIS WAR OF MINE
Platform: PC
76
SummaryNewsArticlesVideoScreens

This War of Mine Review

War is hell, as they say. Between the loss of human life, destruction of infrastructure and collapse of the local society, nobody ever wants to actually experience such large scale conflict. Yet many of us happily participate in a simulation of it, whether in books, movies, or indeed video games. But sometimes, creators want to take a more serious look at a military conflict, so we get more oppressive experiences such as Saving Private Ryan and Homefront. But even more rare are the works that focus on civilians, rather than soldiers and armies. One such game is This War of Mine, a title that tasks players with looking after a small group of survivors in the middle of a conflict zone. 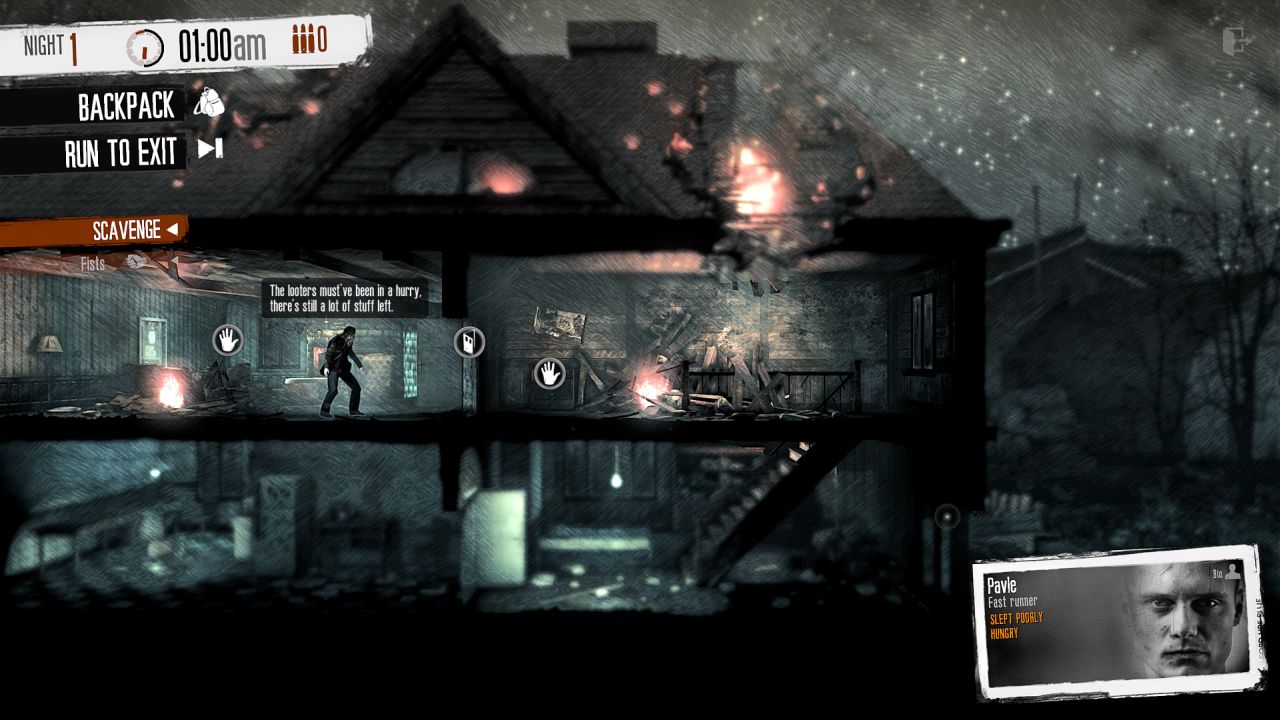 At the outset, we meet our random group of survivors. These four souls have found themselves in an abandoned, multi-story home that they decide to settle in. This house will serve as your base for the duration of the campaign, should you actually make it to the end. Inside, there is nary a chair to sit on or enough beds for everyone. During the daytime hours, your goal is to take care of the survivors and also improve your living conditions. In order to make that happen, you go on scavenging missions at night.

As the night begins, you must choose only one survivor to be the scavenger, while the others remain at the house. You can tell them to sleep or to guard the premises, while you and the scavenger head out to gather materials. Despite all characters having various levels of ability in stats such as running speed, cooking, and crafting, the only thing that matters at night is picking a character with the largest inventory space, so you can make your night time adventures the most efficient. Annoyingly, items that you'll need such as lockpicks, shovels, or a weapon all take up valuable inventory space and so you'll be bringing home less than you hoped.

You get a choice of a city location to scavenge every night, such as a private home, hospital, shopping center, and others. The game lets you know the likely materials found in each area as well as how dangerous it is, before you make a choice. You often need multiple trips to the same location in order to gather everything it has to offer, or if you're faced with a locked door and didn't bring a lockpick that night. There's definitely an element of obsession to make sure you pick the whole place clean before moving on, as the game keeps environments static between your visits. So after scavenging everything from the low-risk areas, you'll need to move up to more dangerous locations that have hostile survivors or the army. 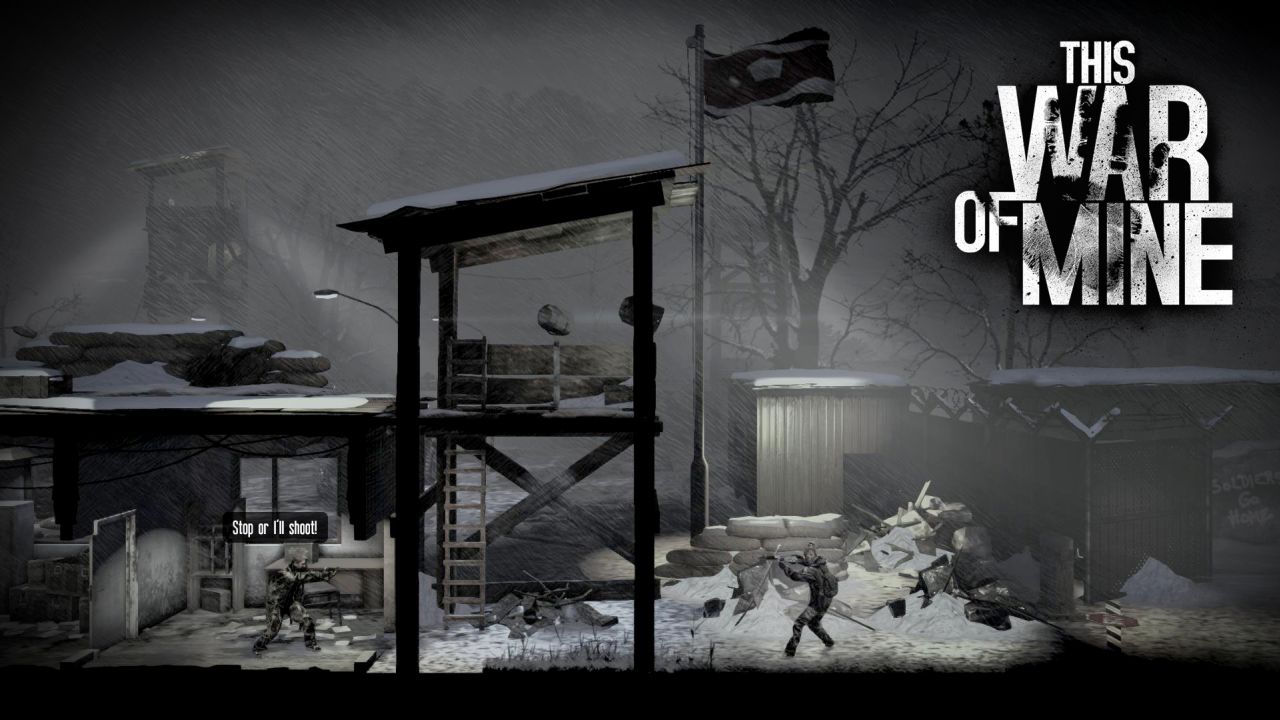 During scavenging, the game controls similarly to an adventure game. You click where you want your character to go, or to interact with. Your survivor will open doors, dig through rubble, and pick locks all in order to find some of the numerous items in the game. From food to building materials to electronic parts, almost everything is worthwhile. There is a Mark of the Ninja-like fog, so you can only see a limited distance and it must be unobscured by doors or objects. You can hear sounds however, so every noise (along with a visual queue) notifies the player that something else is here. It could be a helpless man, or a hostile soldier, or even just a mouse. Discovering the location you're scavenging for the first time can be thrilling, especially as your best option is to avoid contact altogether. But once you've been through the place once, you can finish your scavenging quickly on subsequent nights because, as mentioned, everything stays the same.

In the morning, or by way of manual choice to return home early, you enter the survivor management phase at the abandoned home. Everything you've scavenged is in your inventory, and can be used right away or for crafting. All of the survivors can perform any action, although some can cook or repair better than others thanks to the different skill distribution and traits mentioned earlier. However, these skill boosts are so minor that you'll be fine using whatever survivor or closest to the item you want to interact with. So you build a crafting table (which you can place anywhere you wish), and that unlocks the ability to craft other things. Your survivors have three basic needs – sleep, food, and health. Thus you craft the basics such as a stove, beds, and basic medicine. You can also upgrade the house itself a bit. Like any crafting game, the items get increasingly more complex as you progress through the game, so you can eventually craft benches to grow your own tobacco and plants, a water purifier, or even guns. These items require more and increasingly rare materials, which can only be found at the high risk locations.

It's a steady progression curve, and if you can get through the first few weeks, the game becomes relatively easy and perhaps even boring. Once your stay at home survivors are equipped with a gun or two to prevent random raids from stealing your stuff while you're out scavenging, most of the challenge comes from staying alive in risky locations. Your scavenger can bring a weapon to defend themselves, but it takes up valuable inventory, and the combat is intentionally very clunky. Plus, oddly for a rugged survival game, you can only use specific weapons or tools for combat – instead of say, a 2x4 or a brick. So it's always best to stick to the shadows and get out if there is any sign of danger. If you do enter conflict and manage to kill or purposefully rob a nice old couple, your scavenger will become depressed. 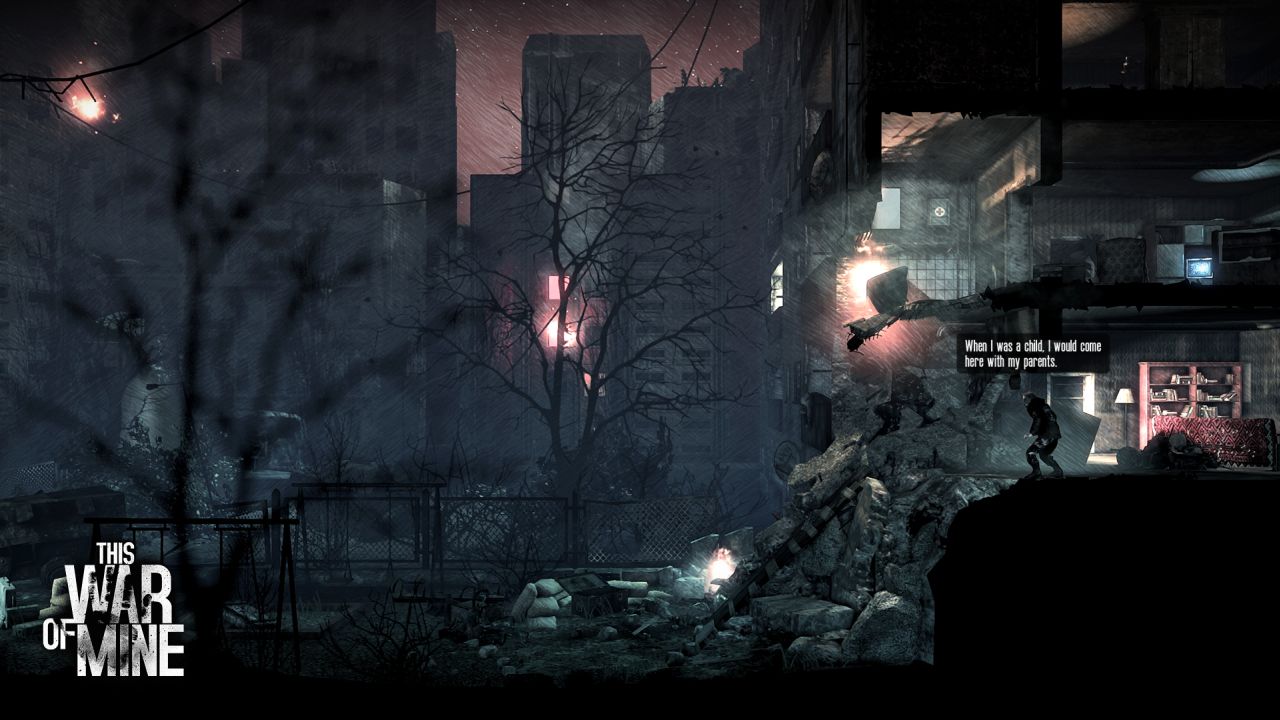 One of the unique aspects of This War of Mine is the morality system. The game doesn't prevent any player actions, so if you choose to be a heartless thief and murderer, it's all on you and your characters. Each survivor has a bio and their own opinions, as well as thoughts on any major events. So if you come home having hurt someone, the mood may spread through the house, or maybe ignored by those who feel such events are necessary. The game tries its hardest to humanize the survivors and force their gloom on the player, so that when things get really bad and one of them decides to hang themselves, you might feel something. But sadly, the notion never comes to pass. The game isn't voiced, so you only see faces and read text, letting your imagination do the rest. The characters have fairly generic background stories, and their moods are often unpredictable and don't really gel with the events taking place. Unless the survivors become so sad that they refuse to do anything, there's not much real impact on the proceedings. You can use items such as cigarettes or a guitar to try and cheer them up, or even have other survivors comfort them. In all, the morality system seems forced and never really connects with the player the way it was intended.

To help with the economy, occasionally strangers will come to the house during the day. It'd be assumed that there is inherent risk to even opening the door, but that is not the case. The trader is your key man for getting rid of goods and buying supplies that you haven't been able to scavenge for your next crafting project. Other survivors come looking for help – either material or physical. In case of the latter, one of your crew will be gone for a few days assisting elsewhere. Rejecting any of these pleas for help may affect the mood of the house negatively, while helping usually brings a reward of a rare item or more materials. The mood will be lifted as well.

Matching the serious atmosphere of the game, the visual style is decidedly bleak. Greys and blacks dominate, with the daytime still only offering shades of brown at best. A daunting soundtrack is a good fit for the themes of the game, however it can be rather monotone and repetitive. 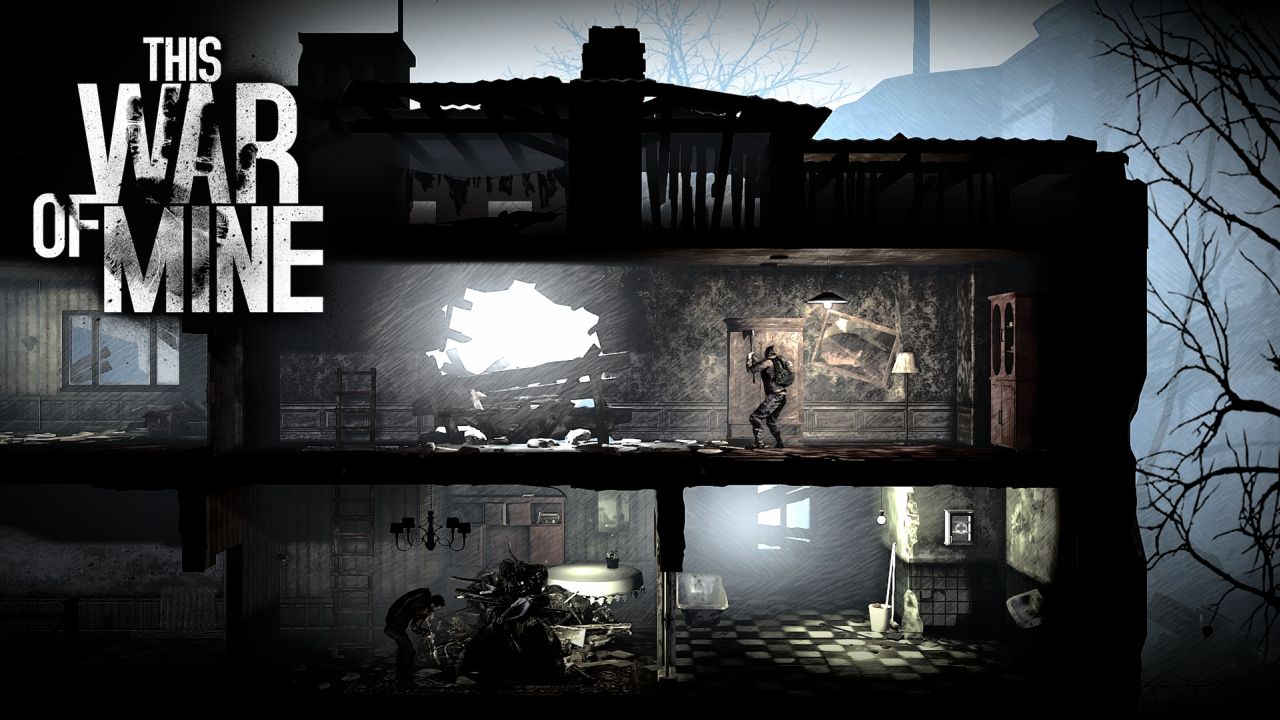 This War of Mine is a worthwhile attempt to create a meaningful war survival experience. With random starting survivors, the game is meant for subsequent replays. Similarly to other games focused on material gathering and survival, such as Don't Starve and Banished, the idea is that your first few attempts may fail for a multitude of reasons. But once you get the hang of things, learn what to craft and when, you should be able to make it through on one of your first five attempts - barring any bad luck random events during the night, or spectacularly botched night adventures. This War of Mine can be fun the first few playthroughs, but having learned the mechanics and crafting order, and with a morality system that doesn't quite draw you in, the game can lose its challenge and appeal quickly.

Our ratings for This War of Mine on PC out of 100 (Ratings FAQ)
Presentation
79
A grey and moody color palette creates an appropriately depressing atmosphere. The score matches the setting, but is limited in scope.
Gameplay
75
The game does well to balance crafting, scavenging and keeping the household members alive. After a while, however, as you learn the best crafting order the level of challenge diminishes.
Single Player
72
Environments remain static between nightly trips, which helps exploration feel satisfying but removes tension on subsequent visits. The emotional impact is often superficial and forced. The game is built for replay value, but there may be little reason to return once you've successfully survived the war once or twice.
Multiplayer
NR
None
Performance
(Show PC Specs)
CPU: Intel Core i5-4670K @ 3.80 GHz
GPU: ASUS Radeon R9 280X DirectCU II
RAM: 16GB DDR3
OS: Windows 7 Professional 64-bit

90
No problems, and the game is not hardware demanding.
Overall
76
This War of Mine successfully blends exploration, stealth, crafting and survivor management in a bleak setting. As most games in the genre however, the gameplay becomes mundane after you've established a winning formula. 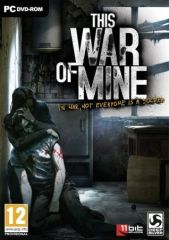