Styx: Master of Shadows is a stealth game. Not a game with stealth mechanics – though that is most certainly the case, rest assured – but a game that somewhat appropriately appears to have passed everybody by with nary a blip on the radar. What happened to the triple-A hype machine, guys? I've grown so used to its endless stream of meaningless marketing noise that hearing it fall silent is an event all on its own. Every time I've brought this game up in conversation it's always been the same story: a confused look, a moment of silence, then a “what's that?” It's not as if the premise is especially disinteresting either: you're a greasy green goblin – the titular Styx – who has infiltrated the Tower of Akenash, an enormous vertical city built to cage a magical tree that extends high into the sky. Why cage it? It's probably got something to do with the tree's amber, the convenient magical plot-insulator which can deform living creatures, make them immortal, fuel magical powers, and presumably also power nuclear fusion reactors. Whatever its properties, Styx wants to get his grubby little hands on as much of it as he can, and that means getting to the tree's heart, an entity sealed away behind a thousand locked doors, barred gates, and guards with comically British accents. Guess how he's going to bypass them? 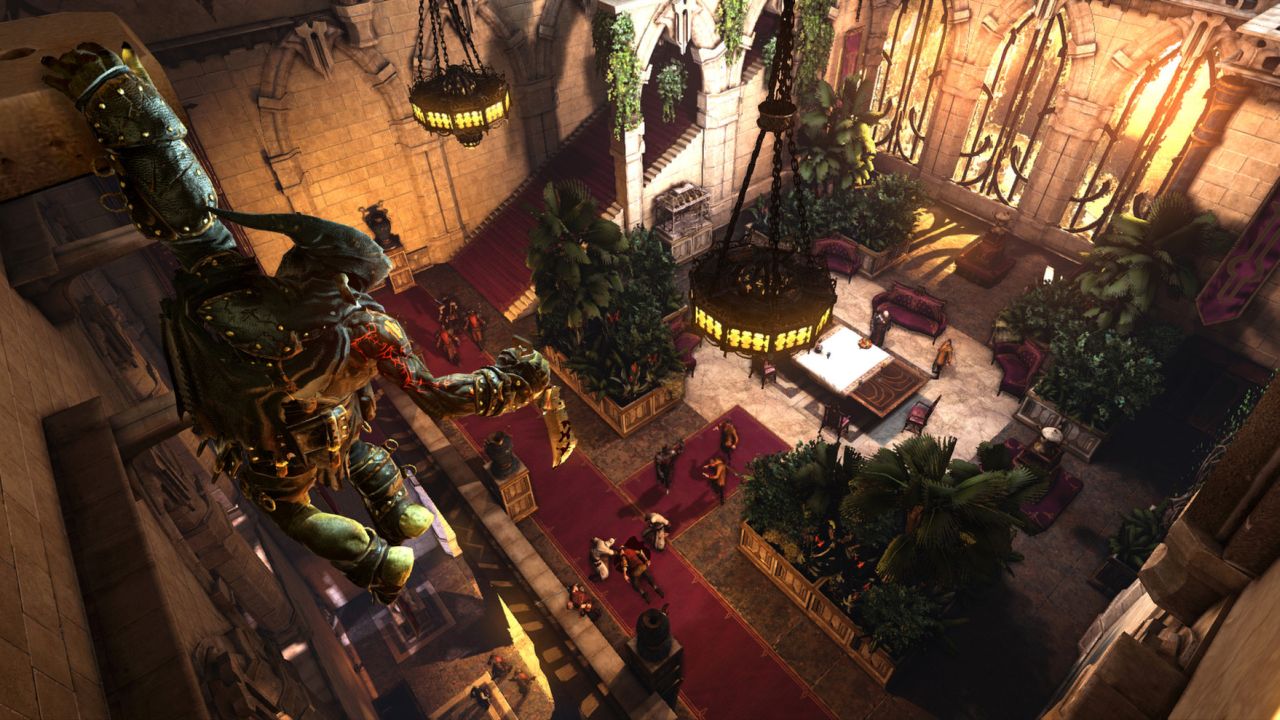 Really though, it's almost a shame that Styx has gone relatively unnoticed like this – goodness me, that was an ominous 'almost' – because it actually does a few things right that other games consistently fail to understand. You have the ability to make every interactive element around you glow like a radioactive stoplight, which is quickly becoming a prerequisite for stealth games since it's apparently the only way to consolidate the graphic designer's oh-so-precious vision with the realities of trying to keep track of dark, muddy, grubby objects in a dark, muddy, grubby environment. Crucially, however, it only functions for a few seconds at a time and consumes amber – your mana, essentially – on use, handily discouraging you from just having it on all the time and making it look like somebody flew over the Tower of Akenash with a crop duster full of Fanta. The platforming is also a lot less restrictive than most stealth games, giving you both the freedom and the consequences of being able to leap wherever and whenever you please, rather than just inorganically clamping you onto rails that occasionally demand you press the 'jump' button. It lets you make jumps that the developers probably didn't even anticipate, which is great, but it also opens up the possibility that you'll botch the whole thing, fall off a building, and land in the midst of some really ill-humoured guards. And assuming that it's entirely your fault, that's fantastic.

Unfortunately, when you do royally screw up, things go down the plughole so fast that the game might as well just skip the formalities and dump you straight back to the last checkpoint. My mark of a good stealth game is one where 'unseen, unheard' is the ultimate goal, but you can still salvage things if you, say, tread on a local stray's tail by accident, and while Styx technically allows you to do that, it tries its absolute best to sabotage its own intentions. Get too close to an alerted enemy and the game will assume – with a staggering display of bleach-drinking intellect – that you want to fight them, locking you into a nigh-inescapable duelling stance that leaves you circling around them gazing dreamily into their eyes while every other guard in the immediate vicinity prepares to cut you into a million sweary green giblets. Even if you manage to avoid that fate, there's always a chance that you'll get turned into a walking knife block by the hundred or so throwing knives that are ditched at you by the perfect-aim night-vision androids that the tower apparently employs. Sometimes the cheap façade completely collapses and there are straight up instant-failure sections, but with the rest of the game being how it is, the distinction is hardly large enough to be worth noting. All it really does is narrow the gap between botching things and being deposited at the 'game over' screen. 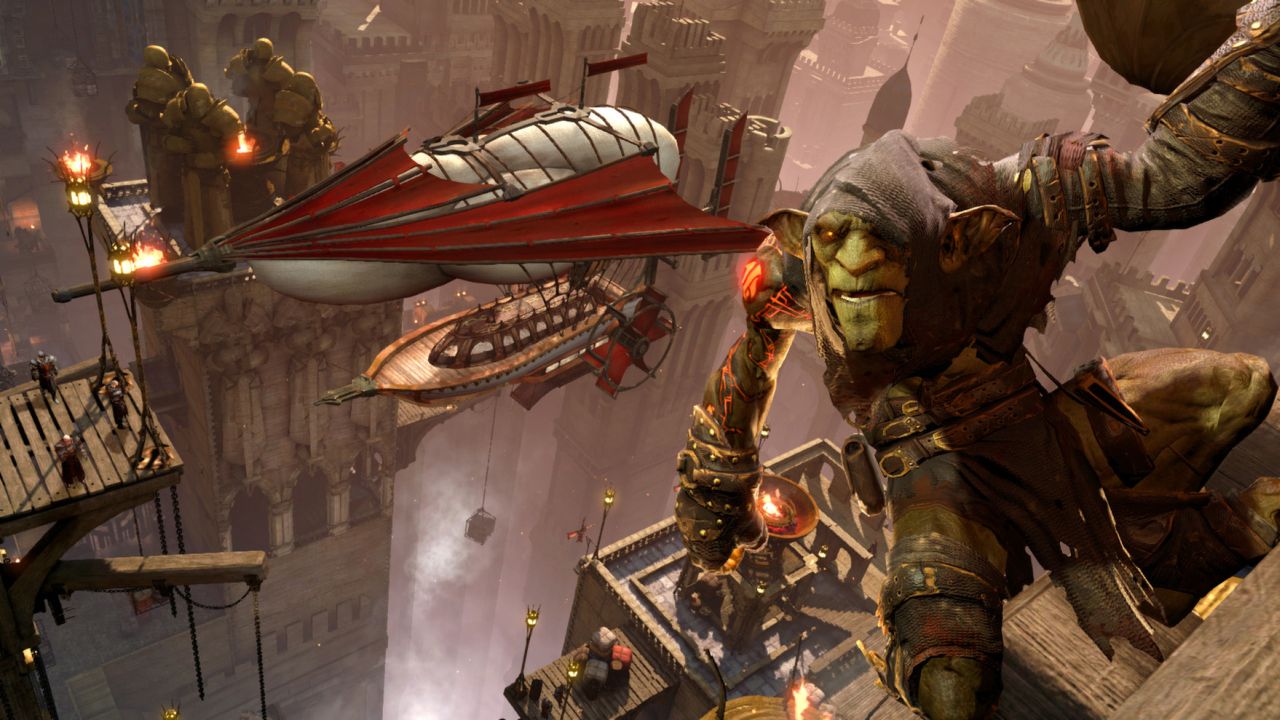 Alright, so what's the stealth like if we don't slip and fall into a stack of wicker baskets? Hmm. Competent, but derivative. It's pretty clear that Styx mailed out for the ACME Stealth Protagonist's Starter Kit – containing a decoy, some throwing knives, the aforementioned amber-vision, the ability to turn nearly-invisible in a dingy corner and completely invisible if you're really rubbish – but it does its job, at least. You can distract people with noises, kill them, then stuff their bodies into cupboards and hope nobody is going to open them while looking for the silverware, or just find a way around if you want the arbitrary end-of-level bonus. Torches, vents, guards, pointless climbable wall fixtures. Eyes glazing over yet? Arms feeling a little heavy? Maybe a bit of déjà vu? Of course; you've been here before. We've all been here before. Isn't there some kind of rule that games have to have at least one stupid gimmick? I could really go for one of those right now.

What do stealth mechanics matter compared to good level design though, eh? Styx doesn't actually do too badly here, although it has definitely spent more than a few nights hunched over Batman: Arkham Asylum, taking notes by the light of the monitor. There's a fairly strong emphasis on verticality, letting you leap from rafter to rafter, scale walls and hide in the wings, which is always a welcome choice over painstakingly mapping out patrol paths on the ground level, although since falling off means almost certain discovery – and hence, getting stabbed in the face by a medieval British stereotype – it almost feels at times like the platforming takes precedence over the stealth itself: either successfully follow the route that lets you bypass this area entirely, or waste your time and sanity trying to actually sneak past. Hardly a difficult choice to make. 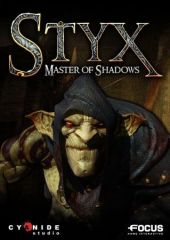