Welcome to space. Here’s a spear attached to your head. Go kill your friends with it.

On the long list of pleasures that reviewers like to take part in (right below ‘ripping into an atrocious game’ and ‘being vindicated over time’) is the habit of trying to coin a phrase, or better yet, a genre. It’s a reflex that comes from that little pattern-recognition flag that pops up in your mind now again, like when you watch a film and get that eerie premonition that you’ve seen this exact story before. That’s the experience that playing Starwhal: Just the Tip gave me. I knew that I’d seen Starwhal already… heck, I knew that I’d seen it several times. I just couldn’t remember its face, so to speak. 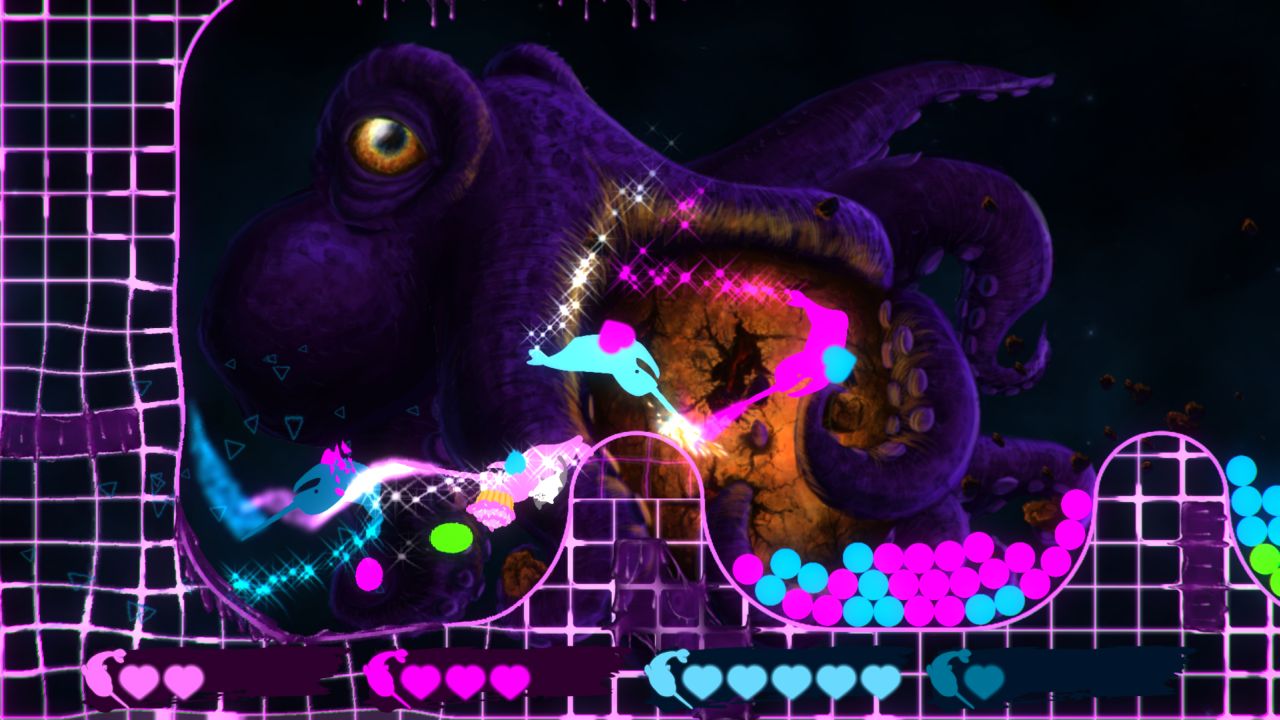 It certainly wasn’t the aesthetic that was so familiar: bright neon narwhals battling it out against a faux-80s background? Afros and caveman coats as costumes? I’ve got to give credit where credit is due: it’s a unique look, and enjoyable in its own right. But my sense of familiarity kept growing as I fiddled with the controls and worked painstakingly as I watched my narwhal flop around aimlessly like an electrified sausage. Then it hit me: the feeling you get when playing Starwhal is the same feeling you get when you play Octodad or maybe Goat Simulator. It’s a game whose primary feature is that the controls are bad. You are a smiling, neon, and possibly sombreroed narwhal, but your motor skills are awful, and your primary ‘move forward’ action feels more like a rocket thrust than a swimming motion. The slightest tap to the left or right will make your narwhal flop and wiggle in the desired direction, but with so much sensitivity that you’ll usually find yourself spinning in endless circles until you hit a wall.

There’s only one final piece to make the gameplay complete, and that is the fact that, being a narwhal, your head is decorated with a long spike. This accentuates your awkward movements and adds a weird touch of danger to them, either to your environment, or to the opposing players. Oops! You accidentally popped that one heart-shaped balloon. Oops! You accidentally impaled your best friend on that spike that’s popping out of your forehead. It’s a game where you and your friends can laugh at your own ineptitude, like those party games at family reunions where you race by throwing a potato chip in order to advance: the point is that everybody is horrible at it, and that’s what makes it fun. 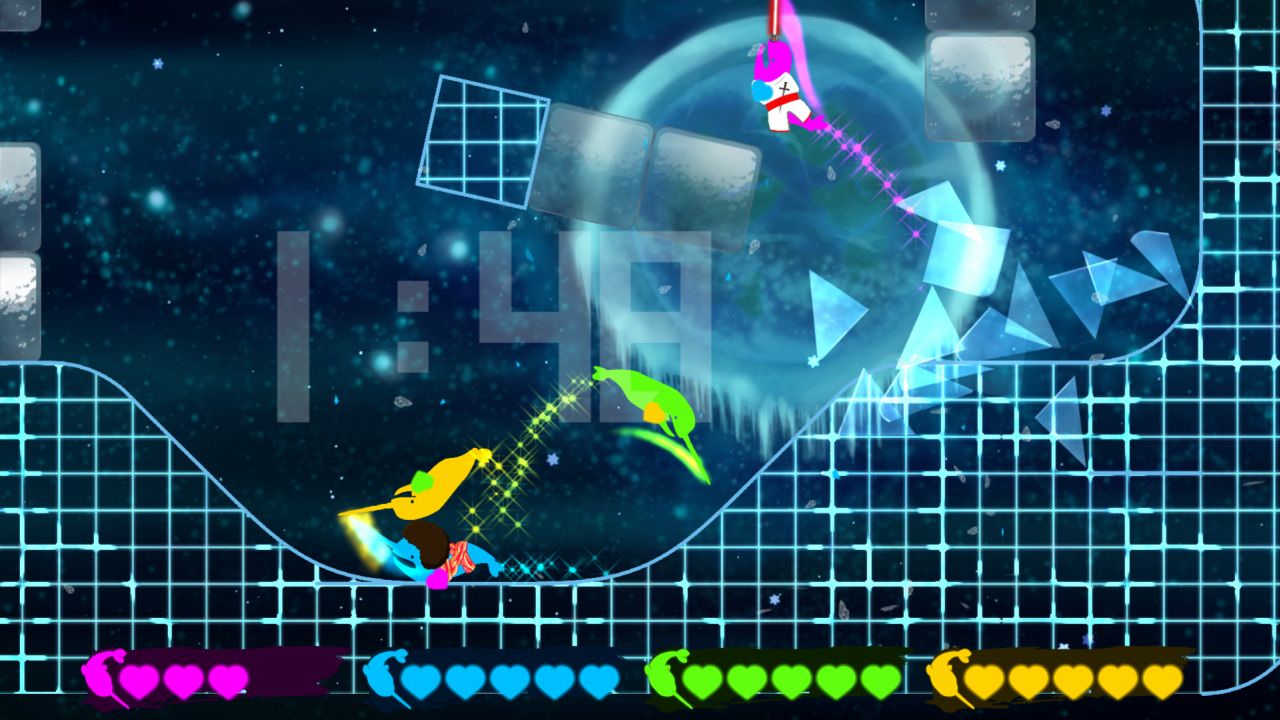 Starwhal has your standard division found in most multiplayer brawlers. On the single player side, there are timed trials (which play like tight obstacle courses), and target practice (where your narwhal needs to burst all the balloons on a level as quickly as possible). Both modes pose a challenge as you get more used to the handling of your overly-ecstatic aquatic mammal, and I guarantee that on the later levels you will declare the gold standard rating to be absolutely impossible when you first see it. Seven seconds to pop all ten balloons? But on my last try, it took me thirty seconds just to get that first one!

On the multiplayer side, Starwhal has four modes that all center around the fun of flopping around with your friends as you accidentally score points. There’s your standard deathmatch, a team variant, and a fun new take on King of the Hill where the ‘hill’ is simply a single target that your narwhal can attach itself to by touching it with the point of its spear (which is, remember, almost impossible to control). These multiplayer modes are fun. Very fun. But they’re just not lasting. With such deliberately bad controls, the joy of Starwhal is simply in flailing around for five minutes and laughing each time you accidentally achieve an objective. The problem comes as soon as any player ever so slightly gets the hang of controlling their animal, at which point that player dominates every multiplayer match, simply because he or she knows how to point in roughly the right direction. That’s what separates Starwhal from its obvious comparisons like Bit Brawlers or Smash Brothers: it’s secretly a cooperative players-versus-environment game, NOT a player-versus-player game, because there is simply zero room for finesse or intensely timed control. 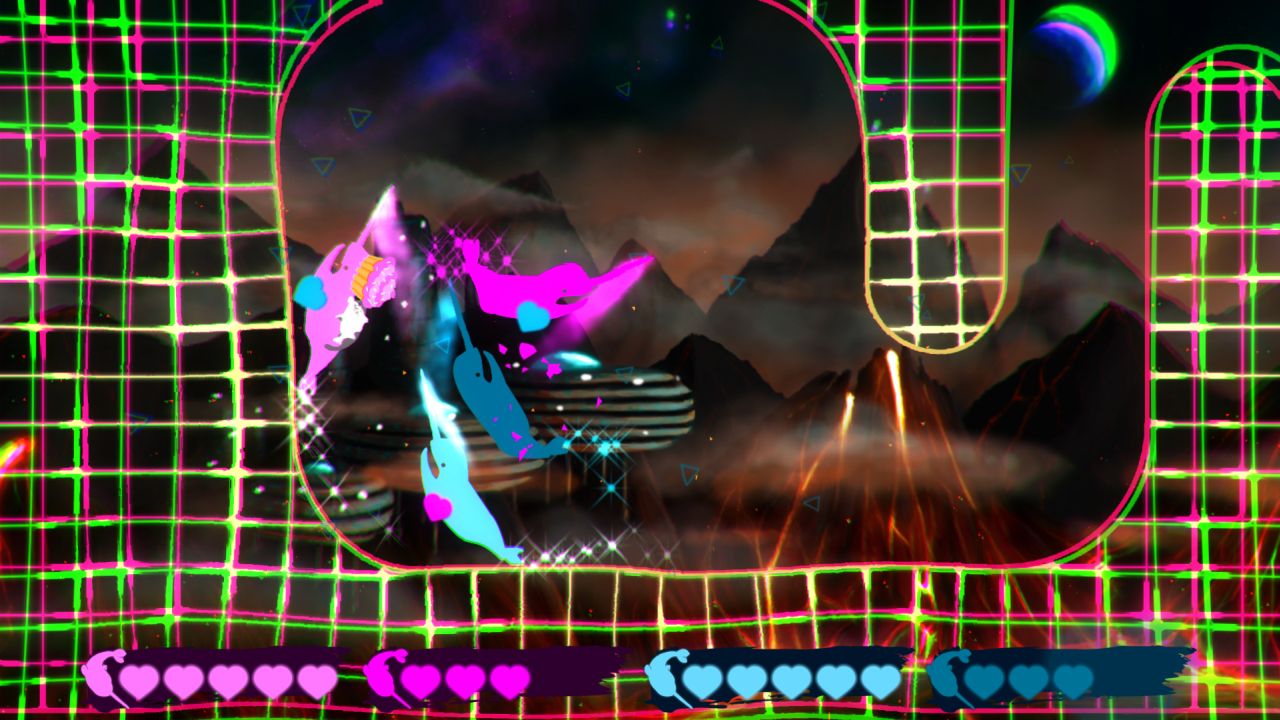 That said, the aesthetic is original and joy to play with. The neon colors and space-age fantasy backdrops all contribute to a feeling of absurdity and pure fun: it’s enough to make you wish other developers would follow suit and remember that video games are at their heart supposed to be fun to play. And Starwhal is indeed fun to play, but only for about twenty minutes. After your guaranteed case of the giggles has died down a little and you start to think about what you’d like to be doing for the next hour, fifteen bucks says you’ll switch over to some other activity.

Our ratings for Starwhal: Just the Tip on PC out of 100 (Ratings FAQ)
Presentation
83
It’s bright! It’s shiny! It has narwhals! What’s not to love?
Gameplay
60
Starwhal has one joke: it’s hard to control your narwhal! This will provide immense fun the first time you play… but not so much anytime afterwards.
Single Player
62
The timed trials are moderately interesting and can definitely get you into "retry mode" as you keep trying to shave just one more second off your time. Target practice and the ability to see ‘ghosts’ from other players adds some diversity.
Multiplayer
75
This game was built for one thing: to have fun with three friends the first time you try the game. It delivers in spades, and promises that you’ll all get a laugh out of your flailing attempts to stab each other.
Performance
85
Multiplayer brawlers require smooth framerates and controls, and Starwhal wisely delivers in this area.
Overall
69
Starwhal is probably a little overpriced, but it will deliver on its promises for a good half-hour or so. It is truly fun to bungle and slide your way around a level until you just barely manage to spear your opponent through with your nose. It’s just not fun twice.