Bringing back that old-school feel

There are times when I feel like ‘nostalgia’ should be its own genre. As the average gamer age climbs upward and next decade’s universal midlife crisis for the NES crowd looms closer, we’ve all seen a surge in the market for games whose principal selling point are fond memories. Both the good and bad aspects of the entire genre are mirrored in Shadowgate, a remake by developer Zojoi of the classic 1987 adventure game. 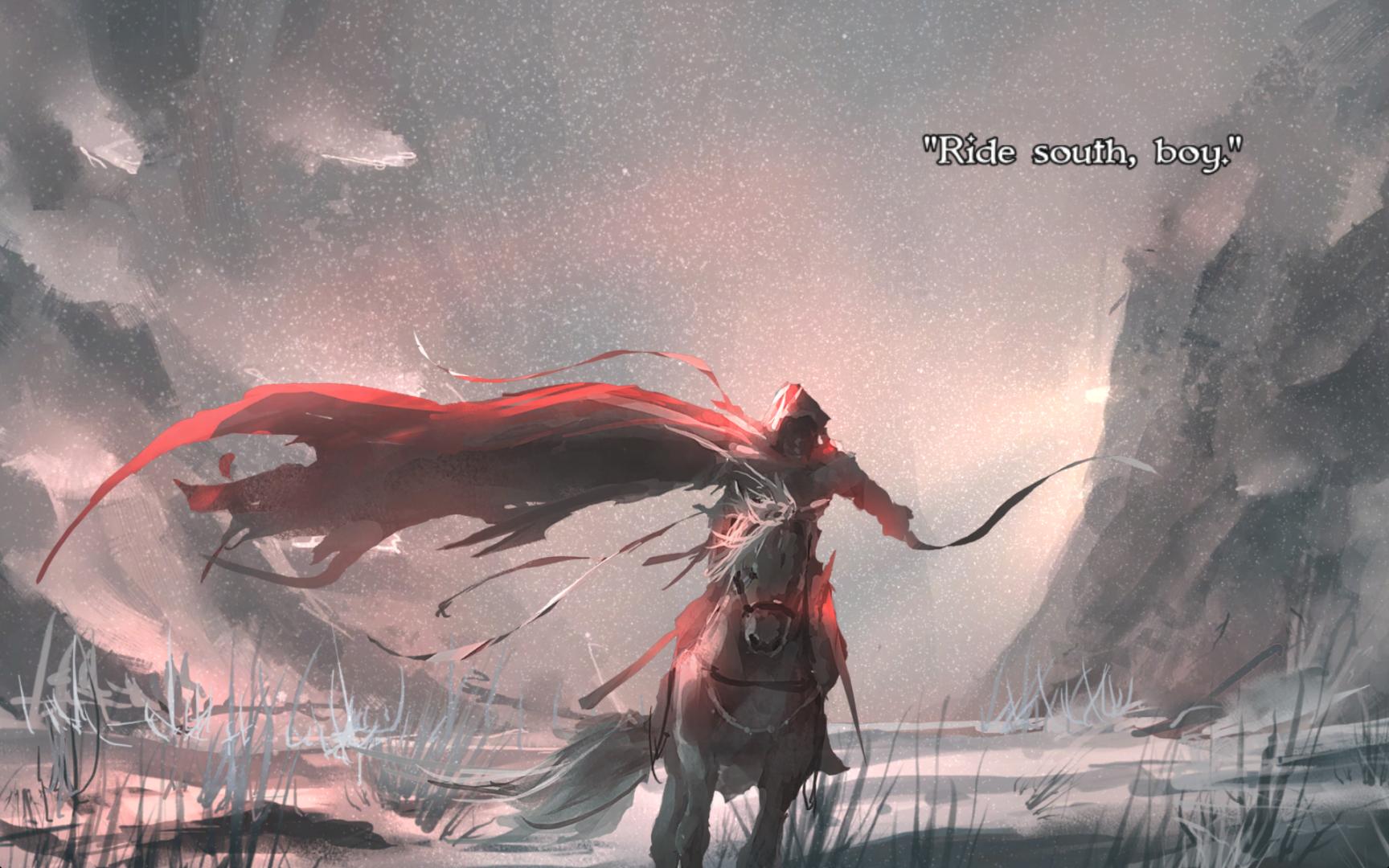 The setup for the game alone brings back memories of Zork and other classics: you are a young warrior plopped in front of a locked door, alone, and mysteriously unable to travel anywhere but through the entranceway. The castle is mostly deserted (of course), and progress consists almost entirely of figuring out how to open up more pathways and rooms for you to explore. To the game’s credit, these unlocks occur with a pleasant variety: teleportation mirrors, underwater caverns, hidden caves, posted guards, etc. Backtracking is necessary as different items begin to open up more pathways, but thankfully you also stand a good chance of opening up shortcuts as you explore. The simple narrative in Shadowgate never rises much above its premise, and the fantasy world is your standard Tolkein-fest that we’ve all come to expect, but for some players, all that might be part of the all-important “brings back memories” requirement.

That Shadowgate is selling itself squarely on the nostalgia factor is made dramatically clear in its three “retro” settings; in the menu options, if you like, you can have the transitions, the text, or the audio for the game revert back to its old-school format. It’s a move that we’ve already seen in the likes of the magnificent Secret of Monkey Island remake, and while it was better implemented in that title (since the ‘retro’ option converted the entire experience, graphics and all), it’s still a pleasant add-on here, if you want to ratchet the nostalgia meter up a few notches.

Shadowgate’s best qualities are in exactly those areas that have seen a nice update. Each setting is lovingly portrayed in broad painted strokes, and although it would have been nice to see a little more detail in some of the panoramic views, this textured approach makes it fairly obvious which parts of the room are ‘interactable’, and which are just scenery. The music track is especially noteworthy, with a strong theme woven into gameplay (although there isn’t much interactive music to speak of) . 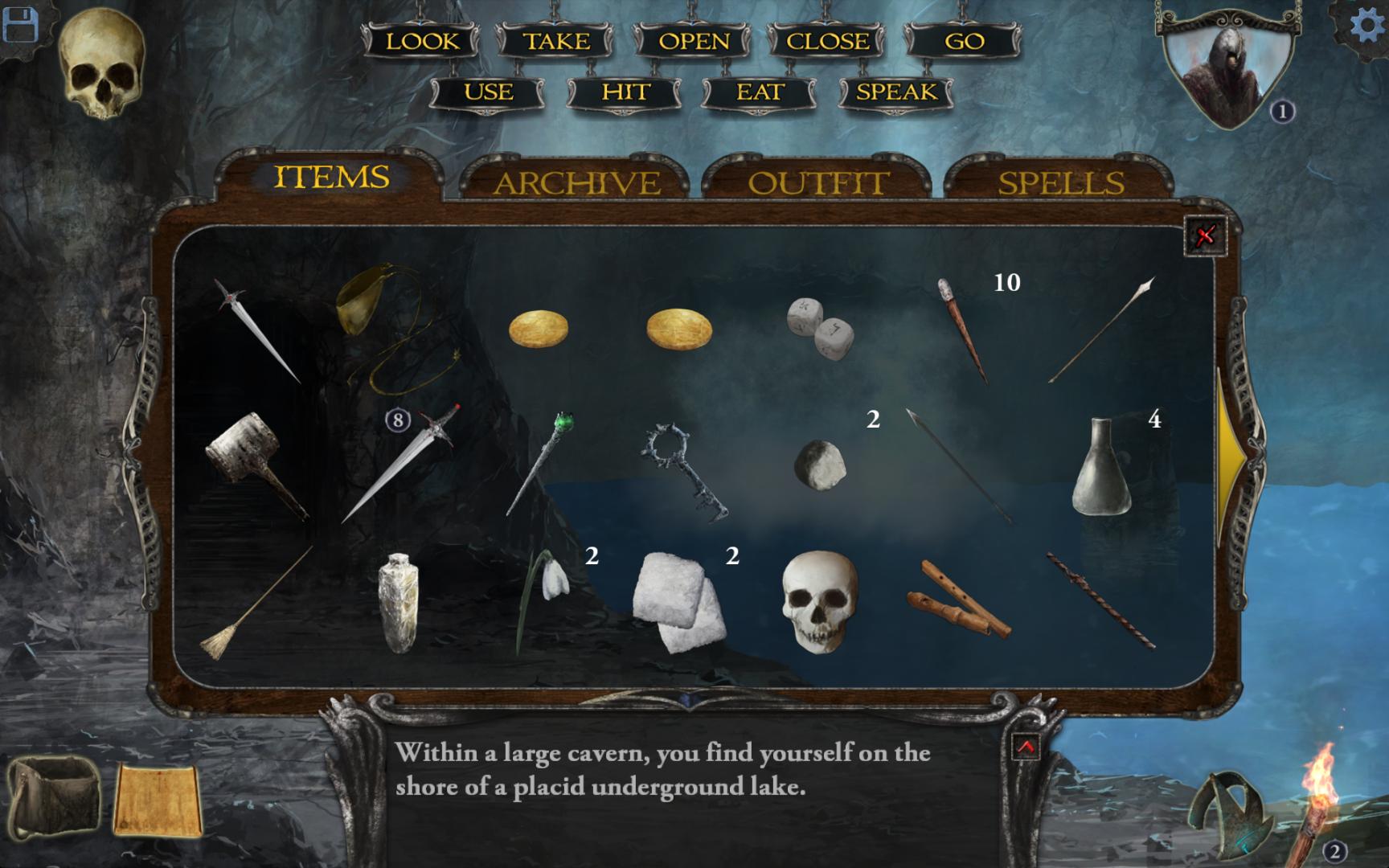 The game also boasts some interesting puzzle-gaming mechanics that other point-and-click adventure games would do well to note (dare I say ‘copy’?). For example, in an early stage of the game, the player is given a sore curse, which will kill them in a set number of moves. When death comes, it does little good to reload the last save point, so you’ll probably want to start the game over and simply zip through those puzzles you already know the answer to. It adds a certain roguelike quality to the game (even though there’s no randomization to make subsequent playthroughs interesting), and as you become familiar with each puzzle, you’ll learn to combine your actions to save on moves while you try desperately to get a little further this time. Even without the curse, the player’s visible light sources grow dim over time, putting another natural limit on the number of moves you can make, and encouraging the player to choose their next steps carefully.

Sadly, this extra focus on careful, thoughtful gameplay crashes headfirst into the harshest faults of Shadowgate. To cut straight to the point: Shadowgate’s puzzles play like those in an average early-90’s puzzle adventure game, and not in a good way. While none of the puzzles fall into the awful “moon logic” category, far, far too many of them rely on trial-and-error to get you through. Perhaps the best example of this is the spell system: during the course of the game, the player will pick up spellwords which, when spoken at specific items, will allow progression. Which items work with which spells? Aside from some slight connections in the name of the spell, you just have to guess. This means that it quickly becomes a standard action to attempt all of your spells on whatever set pieces seem important, every time you enter a room. There’s very little rhyme or reason to the solutions: a spell might work on a certain stone carving, but have no effect on another. Just because.

Adventure games have had no excuse to pull these stunts since that undervalued gem of the past, Riven. If you remember Riven, you might remember that puzzle solutions were intimately connected to the story and culture of the game world. They relied beautifully on ‘fiddling’ gameplay, and encouraged exploration and experimentation on the part of the player. Now, in defense of Shadowgate, it’s true that the puzzling does begin to interconnect with the game world more as the player progresses, but more often than not, puzzle solutions just seem random. Why would the combination to the gearbox be hidden within the gears themselves? Just because. How is the player supposed to figure out that a gear is loose? By individually clicking each of them. After all… that’s how we did it twenty years ago, right? 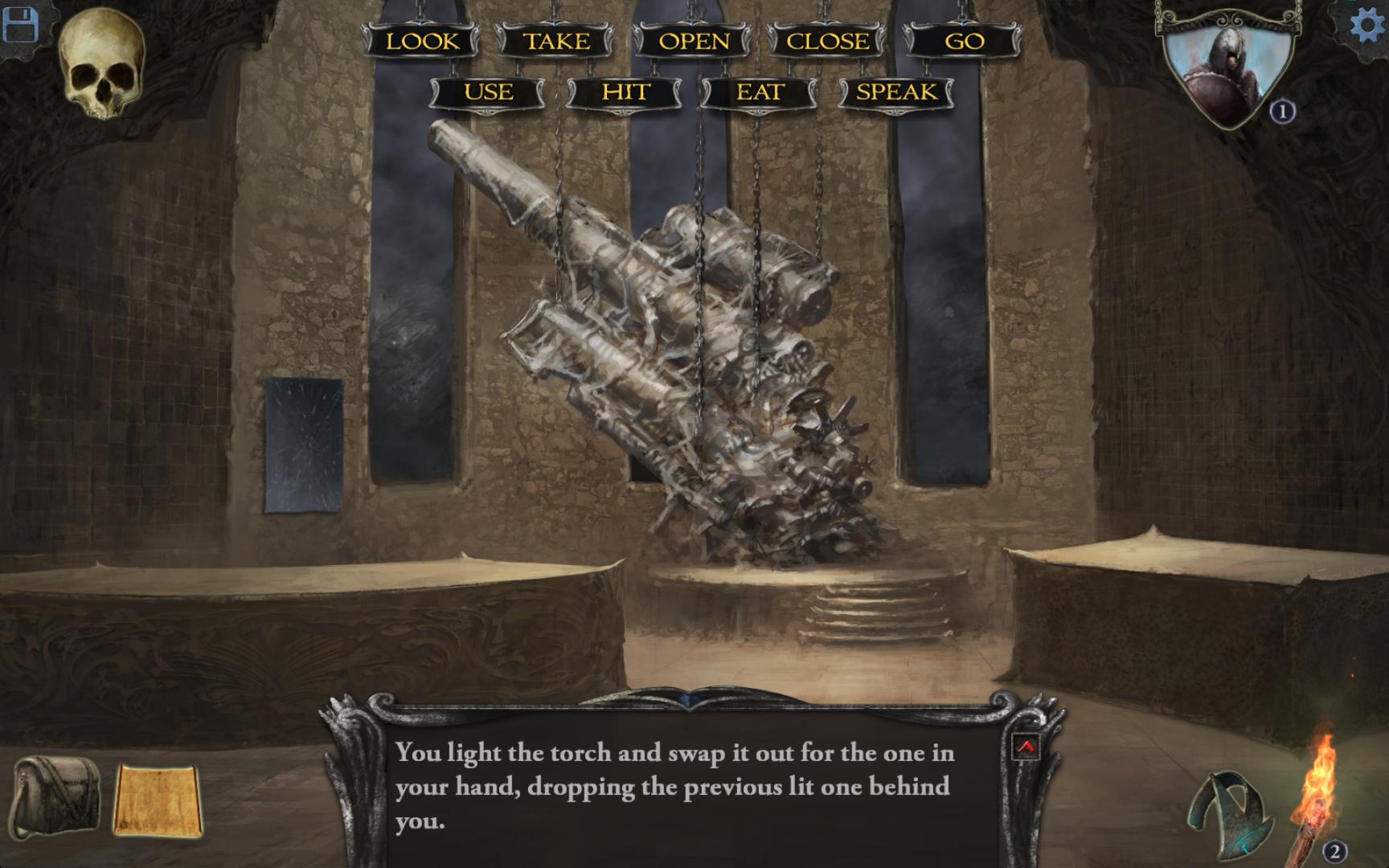 But worst of all are those “try-all-the-combinations” puzzles that have the threat of death looming over them, because these don’t lend themselves to quick attempts at solutions. Case in point; at an early stage in the game, after accumulating a half dozen weapons and various blunt objects, the player stumbles face-to-face against an angry goblin guard. No problem, you might think: just pull out your trusty sword and use it against him. Try this option, and you’ll immediately be killed as a response: the goblin is just too fast. After hitting the death screen, navigating the menus, and reloading, you might try the spear instead. Same result. Then you might try a few spells, or a projectile. All fail, in the same manner. The wizened adventure-game player will recognize this as a sign that they simply don’t have the right tools to solve the puzzle yet, and so might leave that room for another day, but eventually they’ll have to cave in and either generously misuse the hint system or check the walkthrough. The solution? You simply ‘hit’ the goblin with your fist. Get it? It’s unintuitive, and the only way to find it is by slowly attempting each possible approach… just like a first-generation adventure game! Fun, fun, fun!

That’s the real problem behind the puzzling in Shadowgate: the creators too often seem to confuse the idea of “figuring out” with the idea of “stumbling on”. It seems as if in their eyes, being handed a pack of thirty keys and told to try them all out on a padlock is roughly on the same level as being handed a Rubik’s Cube and asked to solve one side. The difference between these situations is that even if they take the same amount of time and cause similar frustrations, the Rubik’s Cube gives you a sense of accomplishment at the end, because the solution involved learning patterns and building up a repertoire of logical skills. With the padlock “puzzle”, you might indeed feel a sense relief when it’s over, and you might even head online to the forums and joke with other victims about how long it took you until you got to key number twenty-four, but there’s no all-important “Aha!” moment when you look back and realize that the right answer was staring at you all along. Good puzzles are about congruence and coalescence, not coincidence. 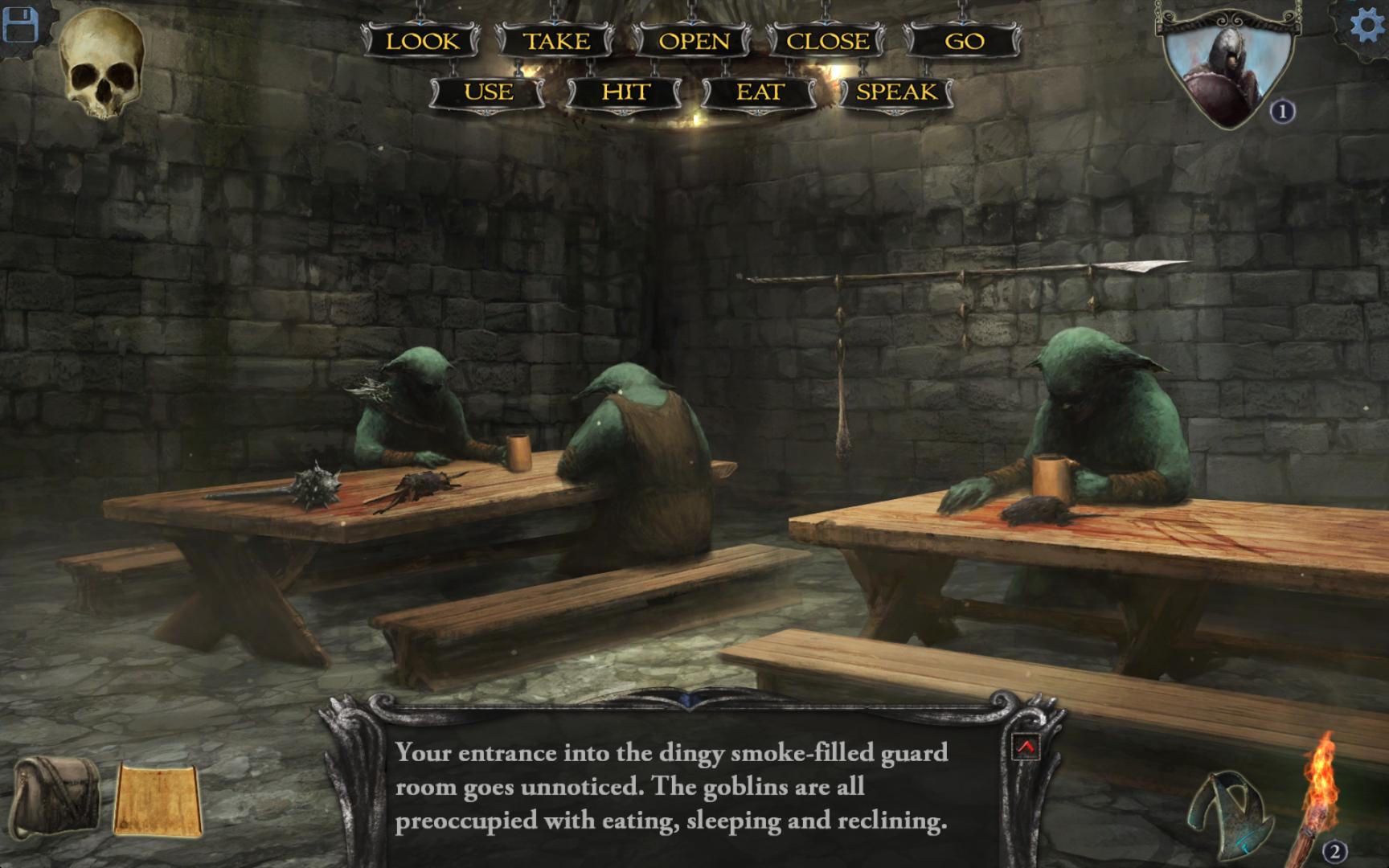 Don’t let me disturb your lunchtime

Shadowgate hasn’t learned the lessons of the past twenty years of adventure gaming. It’s a nicely decked out car with a shiny new paint job, but one that gets horrible gas mileage and breaks down often: sure, it might jog your memory of your first car (which was also a clunker), but why would you want to be reminded of that?

Our ratings for Shadowgate on PC out of 100 (Ratings FAQ)
Presentation
73
The backgrounds and soundset are the most important aspect of the game, and thankfully they’re both presented with gusto and finesse, only being held back by an overly familiar setting and fantasy world.
Gameplay
59
The puzzling hasn’t kept up with the times, and it shows badly. Hope you like trying every combination of item!
Single Player
68
While the story has some elements that end up meshing nicely with the gameplay itself, for the most part you’ll be able to guess the entire narrative just from hearing the premise.
Multiplayer
NR
None
Performance
80
The game runs smoothly, with nary a crash or audio blip.
Overall
65
Shadowgate wants to remind players of what games were like twenty years ago, albeit with a fresh visual covering. The improved presentation is a welcome addition, but the unevolved gameplay and story will tend to feel outdated. In the end, it feels overpriced for a single jolt of nostalgia. 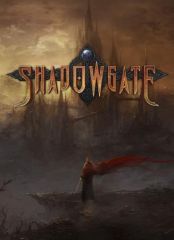