SIR, YOU ARE BEING HUNTED
Platform: PC
56
SummaryNewsArticlesVideoScreens

Sir, You Are Being Hunted Review

The flood gates have opened in the busy world of indie PC games, and an increasing portion of the titles piling up in the Early Access and top sellers section of Steam seem to be focused on some sort of open world survival and/or exploration. Sir, You Are Being Hunted appeared on early access some time in 2013 and has recently come out of those highly contested ranks as a remarkably polished but disappointingly boring spin on the genre. While the premise of the game sounds good on paper, finding food and weapons is far too easy, while escaping from or killing the tweed-adorned, pipe-smoking robots is so simple that minimal tension or satisfaction is gleaned from the exercise.

While many of these survival sandbox games plop you into a world and simply expect you to build your character and last as long as possible, Sir has the good sense to give you a concrete objective to serve as a baseline to your survival and motivate you to explore. After choosing a class which determines your starting equipment, you are dropped into the world alongside a mysterious stone device. A dry British narrator informs you that this device will serve as your salvation if you search the procedurally generated islands and find a variety of crystals which will power up this device. Cleverly the crystals you must gather give off white smoke so you don’t need to worry about searching every nook and cranny, though you will still need to explore the islands thoroughly due to a limited draw distance. 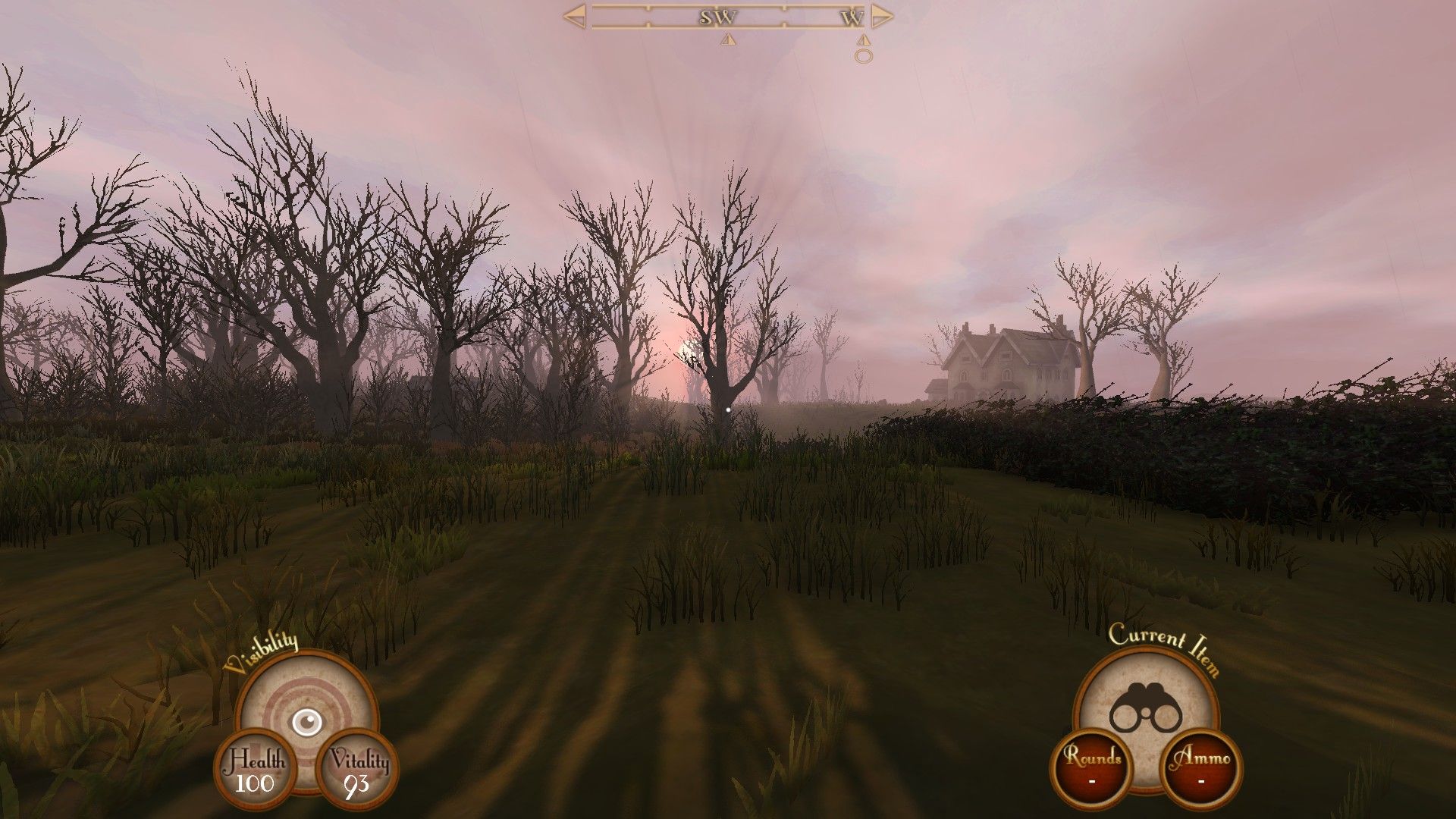 The visuals briefly come to life at sunrise and sunset

My first impressions of the game after being plopped into this world with clear instructions were positive. Villages loomed in the distance with robots patrolling the exteriors, smoke from a nearby campfire wafted upwards; I was eager to get going and explore. However upon reaching the village I was disappointed to find a series of blurry buildings that you loot by going up to the closed doors, pressing a button and seeing its contents in a menu. Poking around in buildings looking for loot are some of my favorite moments in these types of games, and this is totally absent here. I figured it might at least be fun to spend time evading the robots, and this did keep me interested for a bit longer. You can throw bottles to distract them and crouch in long grass to hide.

However even this aspect of the game started to deflate once I came across my first fragment (the name of the crystals you use to power up the machine) which was guarded by two robots. I had acquired a pistol that had the mono-colour appearance of a cheap plastic toy you might give to a five year old which floated disembodied on my screen. The fragment was in the open so I decided to try and shoot the robots and grab the fragment. I figured that since this was supposed to be a survival game it would be a challenge to take the two patrolling guards out, but discovered I only needed to shoot them twice to take them down. Their reaction time and aim was such that I did not get hit. It took me about ten minutes to find the pistol and a good amount of ammo and already the feeling of vulnerability that held my attention initially had vanished. 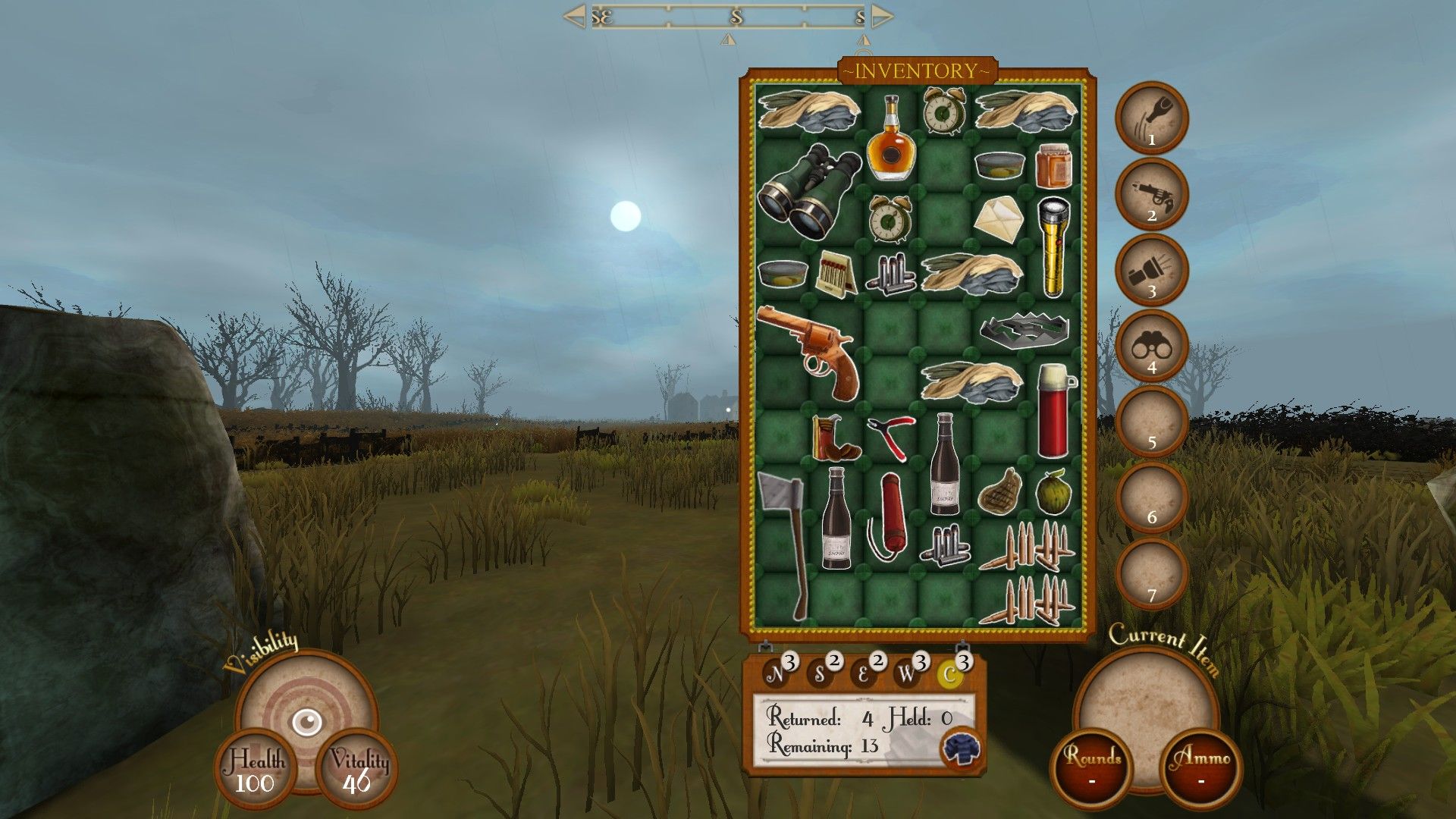 My inventory contents after about 20 minutes of playing

So I continued on my journey, taking boats between the islands which also act as save points, wondering if there was something more to Sir, You Are Being Hunted. I discovered a few things, like the ability to cook raw food on a camp fire which also attracts enemies once you light it. You can eat food labeled ‘dubious’ which can either lower or raise your vitality which serves as a joint hunger/thirst meter but this was moot since I never had trouble finding food or drink labeled ‘usable’ which always increases your vitality. I found letters and books, some of which gave a bit of flimsy exposition about why there are British robots roaming the countryside while others poked fun at British stereotypes.

Once I had killed a few robots it seemed I encountered them less and less. I would explore entire islands, only coming across the red-eyed baddies when they were guarding fragments. Occasionally I encountered robot balloons which would appear and float around with a spotlight, but they move so slowly that avoiding them isn’t a challenge. After collecting enough fragments, robot dogs showed up and detected me by sniffing, but this small increase in difficulty was too little too late. It’s possible that other enemies start to show up as you find the last few fragments, but I was bored to tears by this point and couldn’t bring myself to play more since the finding the final fragments would entail going back to all of the islands and searching every last corner. Different islands offer different scenery thanks to a variety of environments you can select at the start, but they only vary on a visual level since you can’t enter any buildings and the enemies don’t seem to change based on location. 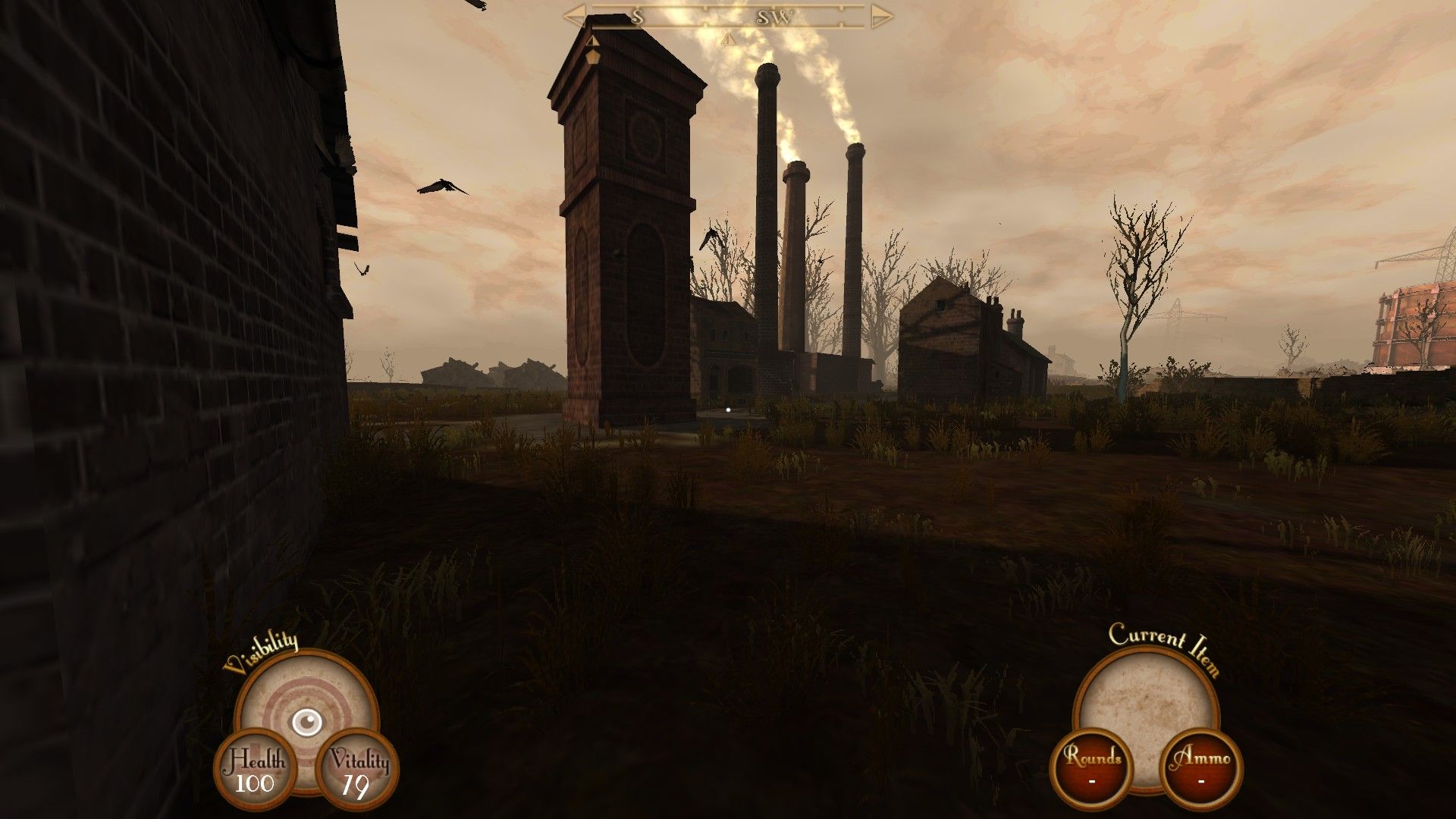 Not all white smoke in industrial islands is produced by Fragments

When it comes down to it there simply isn’t enough substance in Sir, You Are Being Hunted to hold your interest after the initial period of exploration and discovery that might last about an hour. The game is sorely lacking in texture beyond its British-themed enemies and narration. Something like unique areas with good loot but a lot of guards or explorable interiors would help add some much needed flavor to the game. As it stands I found myself out of my mind with boredom in a genre that relies on immersion and tension in order to keep you playing. Dayz has unpredictable encounters with other human survivors, Don’t Starve has a unique art style and interesting crafting progression, Sir has a gaping hole where some comparable centerpiece mechanic is missing. What’s here is competently made and reasonably well executed; it’s just far too simplistic to hold your attention for long.

Another aspect of Sir that harms your immersion in the world are the blurry visuals that are begging for more detail or style. Apart from the tweed-wearing, red eye robots whose pipes produce a trail of white smoke the environments in the game are painfully bland. Almost all of the textures in the game are extremely blurry, and the items you equip and hold up look like cheap plastic toys. The lighting engine fares somewhat better with god rays coming through the trees in the evening and early morning, but overall the game needs more stylization or at least some decent textures. Sound is adequate with minimalistic music that wouldn’t feel out of place in a cheesy Halloween film setting the campy tone for your journey. Robots wander around talking to each other in robot voices and foliage rustles as you move through it. 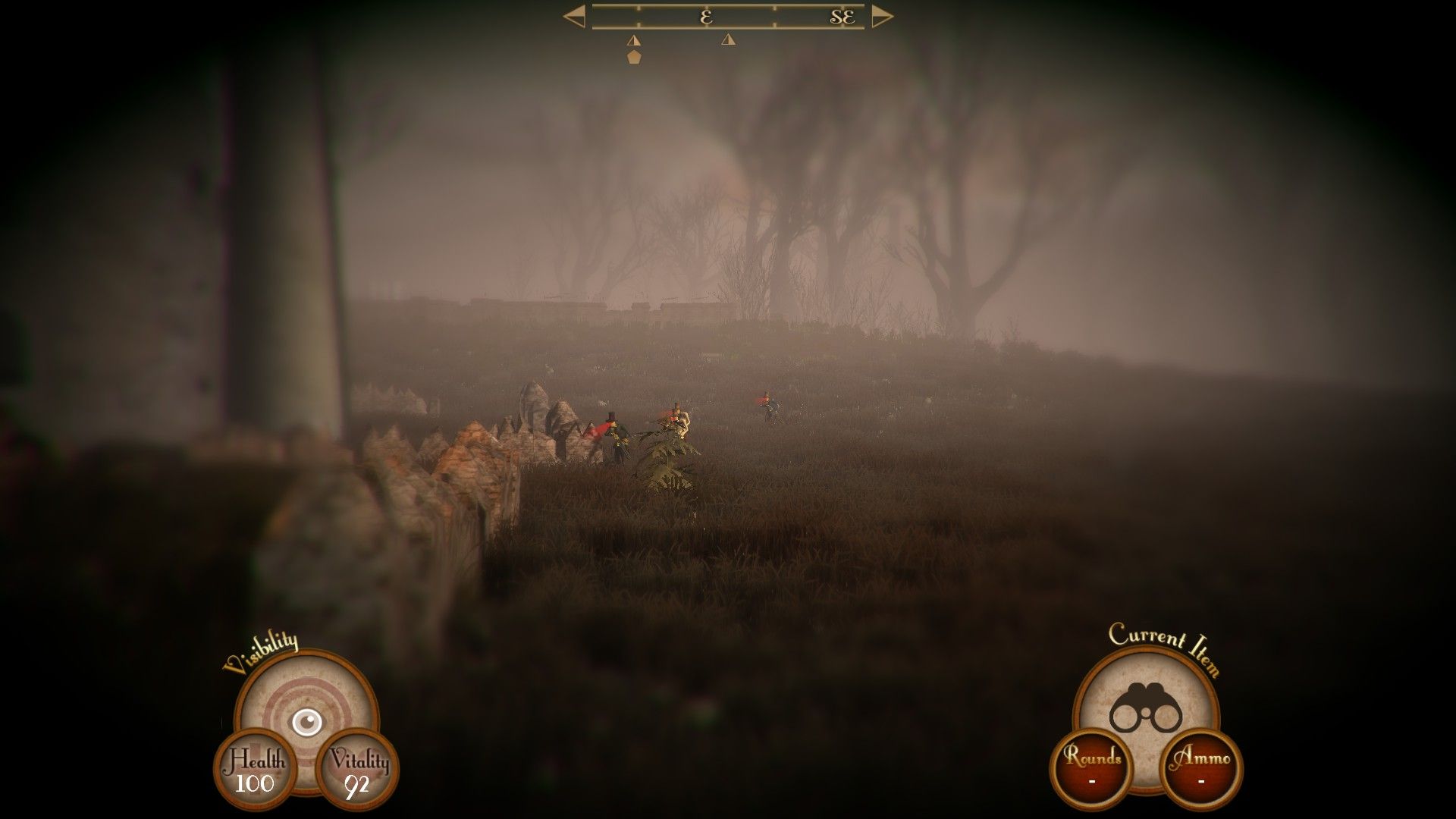 Lighting fires for cooking will attract robots from all around

It’s a shame that Sir, You Are Being Hunted doesn’t have more to it since the game is well made and all of the systems seem to function properly which is more than can be said for a lot of open world survival games right now. It even has the recipe for replayability thanks to randomly generated terrain and a good selection of environments and starting classes. The problem remains that once you spend 10 minutes looting you have enough food and firepower to make things very easy, and exploring the randomly generated islands is just not interesting or enjoyable. The developers have promised to continue adding features including multiplayer at which time the game might turn into something more worthwhile. However as it stands unless you have a burning curiosity to see what it’s like to avoid or combat British robots, your twenty dollars are probably better spent elsewhere.

Our ratings for Sir, You Are Being Hunted on PC out of 100 (Ratings FAQ)
Presentation
50
Beneath the thin British facade is a very ugly set of environments that briefly come to life at sunset and sunrise, music and sound effects are passable but unremarkable.
Gameplay
55
Exploration and looting are rather boring due to the ugly environments and lack of interiors, encounters with robots are functional but they are too few and too easy to kill or avoid.
Single Player
60
The potential for replayability exists with different starting classes and randomly generated environments, progress becomes very slow once you explore all the islands and need to find the last few fragments.
Multiplayer
NR
None
Performance
(Show PC Specs)
CPU: Intel i5-2500k @ 3.3ghz
GPU: EVGA GTX 670 FTW 2GB
RAM: 8GB DDR3
OS: Windows 7 Ultimate 64 bit

80
The game runs smoothly and I experienced no crashing or bugs, inventory management can be a problem.
Overall
56
While Sir, You Are Being Hunted is a competently made game, its British personality and enemies aren’t enough to save it from bland environments, ugly visuals and an overabundance of food and weaponry.

Sir, You Are Being Hunted 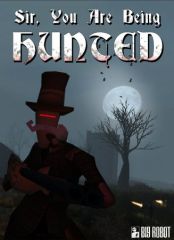