STICK IT TO THE MAN
Platform: PlayStation 4
70
SummaryNewsArticlesVideoScreens

Stick it to The Man Review

The latest PS+ offering is an odd little creature, part platformer, part classic adventure title, all off its rocker. You play as Ray, an odd neurotic little loser who whilst on the way home from his delightful job as a safety hat tester, is hit on the head by a suspicious government canister that falls from a helicopter above.

It’s bad enough that Ray spends his work days getting hit on the head by heavy objects, but at least he’s getting paid and usually has something resembling a safety hat on his bonce for protection. Or a collection of newspapers and juice cartons from the more environmental-friendly apparel providers.

Instead of a nasty bump on the head, this canister seems to have given Ray a unique gift, a long pink arm that juts out of his head with which he can read minds with and even steal some thoughts into physical objects to be used in the real world. Ray can even use this extra limb to pull himself around the world on notice-board-style pins. 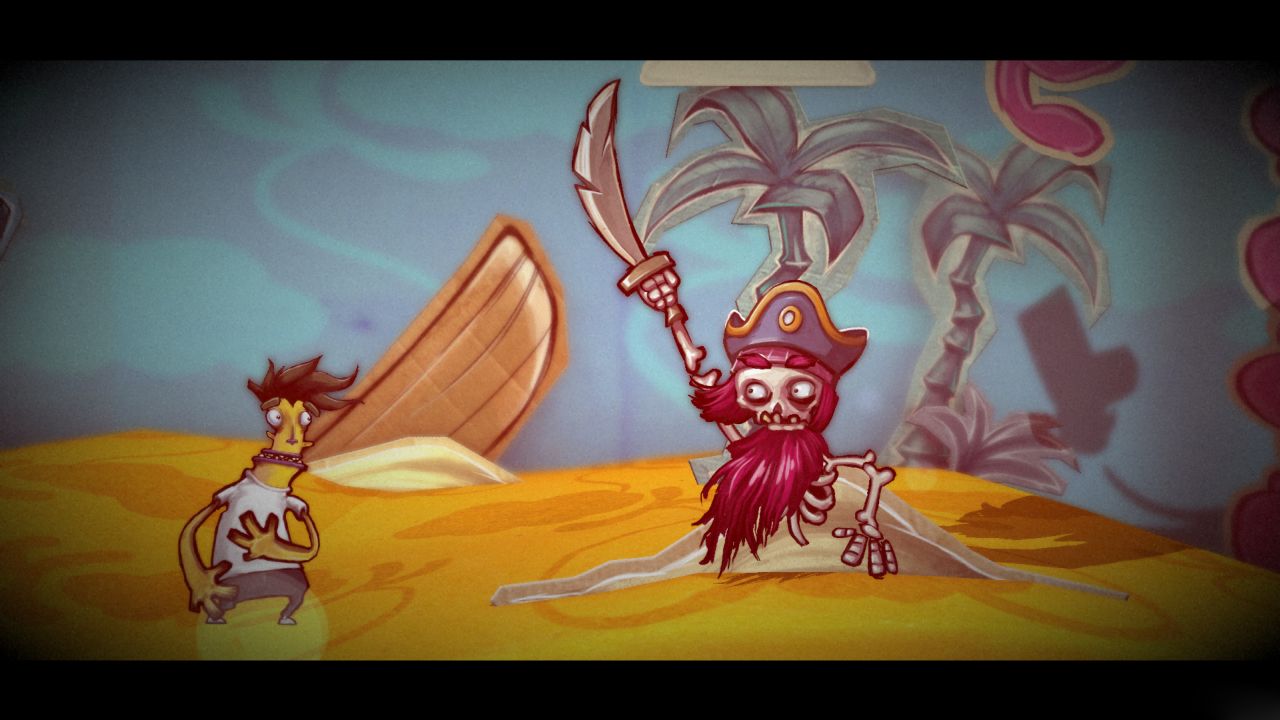 Reading the thoughts of people in each chapter is key to progression as some of these thoughts will let you know what items they need before they’ll let you pass or provide you with another item you need. These inner monologues are frequently insane or oddball and while initially amusing, they soon become rather dull. The audio from these mind-reading sections comes solely from the speaker on your DualShock 4 controller, which can be quite awkward if you’re trying not to wake up your better half next to you who may have a 5am start and they can half-hear the psychotic mumblings of a goldfish or a whale-obsessed sea captain.

You can crank up the mania to 11 by using the left stick to fast-forward the audio turbo chipmunks-style, which in conjunction with the subtitles option, allows you to get through the dialogue much quicker. The game’s odd humour wears thin too soon, and I found myself fast-forwarding every conversation just tuning in enough to find out what the hell they wanted.

The game world itself is made of 2D cardboard cutouts, with the landscapes formed with crudely cut shapes and basic illustration. Stages typically scroll from left to right with you needing to move back and forth, picking up pieces along the way to help out the locals. Characters populating the levels seen to have been illustrated via a fear-induced blend of Tim Burton and Ren & Stimpy –they are going to freak you out.

The 2D design suits the gameplay well and with the helpful map, stages are simple to navigate and you usually have a few helpful indications of who you need to scan next or where there’s something to uncover. Ray’s supernatural hand can also be used to peel walls off certain buildings like the world’s creepiest advent calendar, unveiling a new group of minds to feed from. 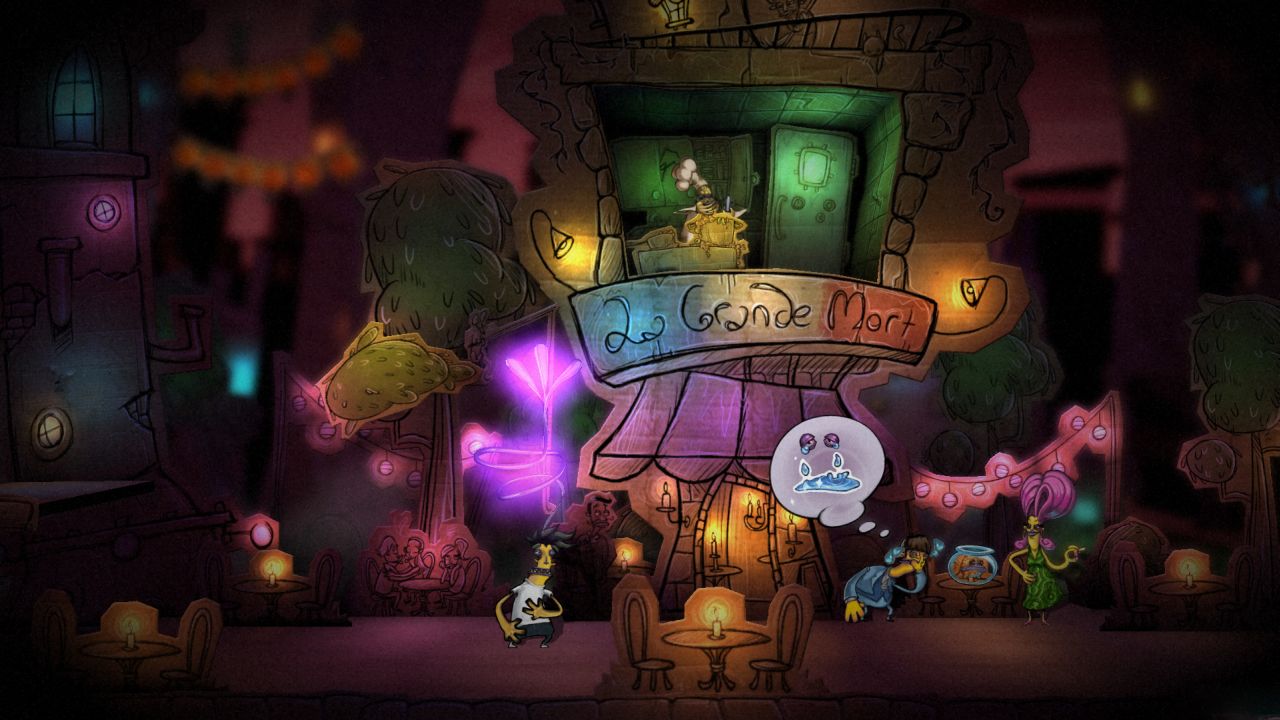 Ray’s mind-reading arm is controlled via the right stick, but it’s way too sensitive. Alternatively, you may find the PS4’s trackpad easier to use, with slight touches and clicks proving much more intuitive than the wild on-screen flailing unleashed via the right stick.

The game is split into individual self-contained chapters, so any items you pick up, will always be used in that chapter, rather than see you build up a bewilderingly large collection of random items like you would in classic point-and-click adventures titles like Broken Sword or Day of the Tentacle.

It’s not all fetch quests though, there are government agents intent on peeling that extra arm from Ray’s brain if they ever catch him. There are also the rather brutish nurses in one stage set in a loony bin. When seen, you will be chased so you can try to run away or maybe you’ll have to use your noodle a bit by leading them one way and doubling back above them to get past the area they were guarding. Ray isn’t particularly quick, so he’ll have to rely on clever timing or using his mind-hand to attach to useful climbing hooks. The platforming controls are responsive enough to get the job done with minimum frustration and when you are caught, checkpoints are often nearby and there’s no reload screen to sit through, allowing you to have another crack at getting past the goon squads.

Sleepy agents can be mind-scanned and have a ‘ZZZ’ thought sticker stolen. You can then slap them with it to sneak past while they doze for a few seconds. Agents who have a wanted poster with Ray’s face can be slapped with an image of it, fooling all nearby agents into attacking them while hopefully clearing a route for you. It can be awkward stealing these thought bubble items though as you’re rooted to the spot while mind-reading and enemies will often move out of range or spot you before you’re done. Some of this stealth-platforming in later stages can be very difficult until you’ve worked out a decent route, but the nearby checkpoints make life easier and it’s great fun when you spot a narrow opportunity to escape while being chased by multiple guards at once. 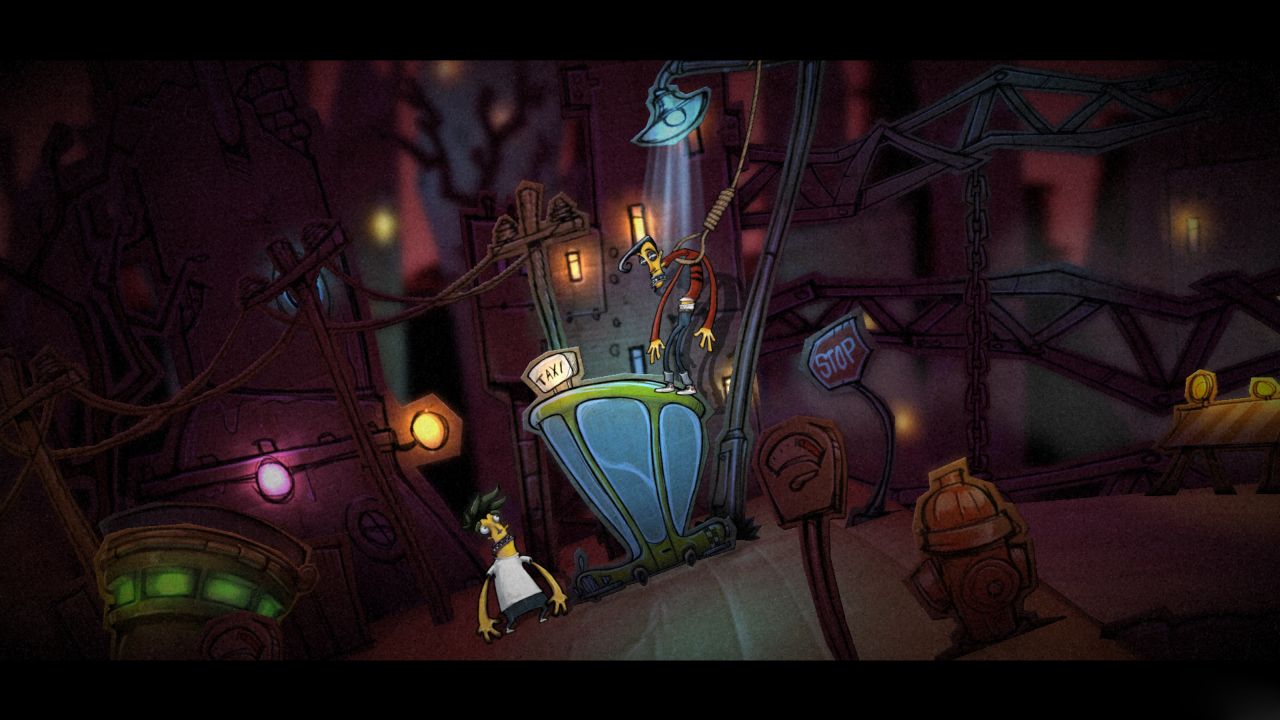 This isn’t the longest of games, but I found myself drawn in to the end thanks to the ever-changing environments and I even went back to replay some stages in order to scan every brain in the game, which was admittedly more for the Gold Trophy rather than to listen to the odd ramblings of each citizen. While a little pricey on PS3 and Vita, Stick it to the Man is cheaper on PS4 or currently free if you’re on PS Plus, so why not give this odd little adventure a try?

Our ratings for Stick it to The Man on PlayStation 4 out of 100 (Ratings FAQ)
Presentation
72
The paper style won’t be for everyone, but the hand-drawn aesthetics do have a creepy charm to them.
Gameplay
70
Solid 2D platforming with some basic item hunting similar to past point-and-click adventure titles.
Single Player
67
Good entertainment for a few night’s worth of gameplay, but not much replay value once you’ve cleared up the Trophy collection.
Multiplayer
NR
None
Performance
70
No problems apart from the right analogue stick controls being too sensitive. Thankfully, the DualShock 4’s trackpad performed the same task with more finesse.
Overall
70
An enjoyable indie platformer with some nostalgic adventuring thrown in for good measure. The humour gets old real quick, but the neat visuals make up for it in style. 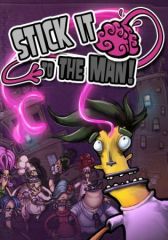