Explore the world of the Invizimals as the series comes to PS3 in a third-person adventure. You are Hiro, a young explorer who discovers a magical portal that teleports you to the Lost Kingdom – a land under attack from a cruel, rampaging robot army. Transform into 16 of the most popular Invizimals, using their unique powers and abilities to solve puzzles and battle against your enemies. 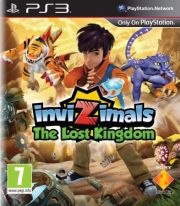