Infamous: Second Son marks the biggest Spring 2014 first-party release for Sony’s new PlayStation 4 console. The original Infamous debuted on the PS3 years after that console was released, so the opportunity to launch on the newly released PS4 is a great tribute to the franchise’s success and the developers at Sucker Punch Productions. And while Second Son is a technical marvel on the PS4 and retains many of the same elements that made the franchise popular, a few shortfalls prevent it from soaring to dizzying heights.

Second Son picks up years after the ending of Infamous 2. Sadly, for newcomers, the game glosses over most details and only provides a short text entry to setup the narrative. Fans who’ve played the PS3 titles will be excited to see how the world has changed since Cole’s story, and find tons of references and Easter eggs pointing to the previous games. While newcomers to the franchise will likely miss out on the depth of this game world, the narrative makes it fairly easy to jump in. Second Son follows the exploits of Delsin Rowe, a young graffiti artist and a rebellious member of his Native American tribe located near Seattle, WA. 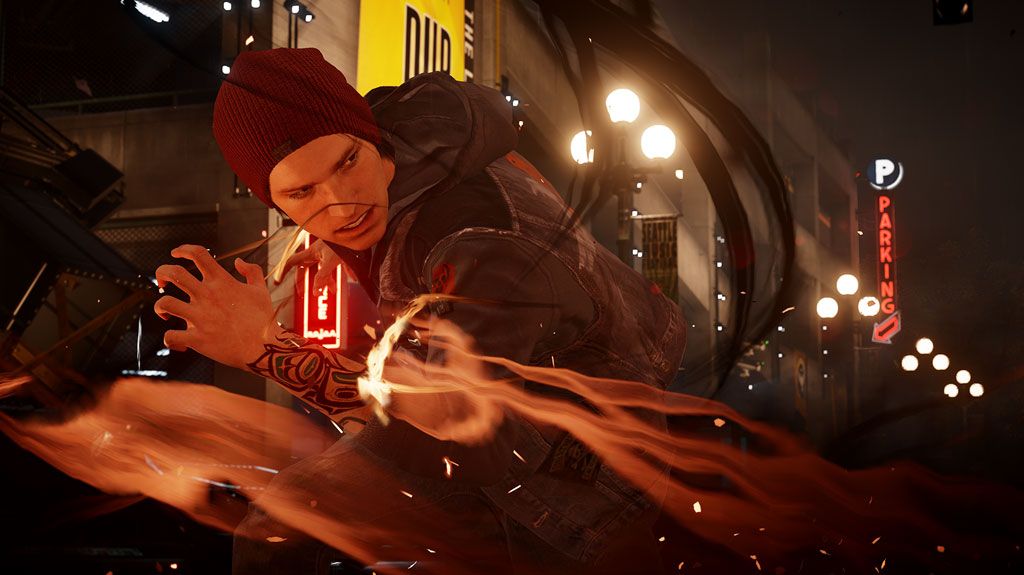 By no choice of his own, Delsin acquires a power to control smoke, and realizes he is a conduit. These supernatural people can channel super power of various elements, much as Cole did with electricity. This instantly gets him labelled as a Bio-Terrorist by the Department of Unified Protection, an organization that was created after the events of Infamous 2 to combat the conduit threat. Delsin realizes his predicament and attempts to relinquish his power to avoid becoming prey to the DUP.

Compared to Cole’s fairly blank-slate character, Delsin lives in a much different world, so finding out he has powers is met with fear, rather than excitement. However, it is not long before personal motivations of revenge take over and the goal becomes the acquisition of more powers. After setting up what could have been an intriguing narrative of an anti-hero, Delsin happily uses his new abilities to take out the DUP. He is frequently joined by his cop brother, Reggie, but their relationship isn’t as interesting or complex as that of Cole and Zeke in the original. Other conduits enter the plot at various points, but provide little beyond a stock typical personality and assisting you on a mission or two. They later become predicable pawns to get Delsin motivated or his aides in final confrontations.

While the story is predictable and weak compared to the past entries, the characters and dialog are not to blame. Everyone delivers their often funny lines with great timing, undoubtedly helped by the great facial animation. The stylized comic book-like cutscenes have been reduced to a minimum for this entry, instead replaced by the usual modern exposition scenes. These are expertly acted out however, and help immerse players in the world. It helps that this is the best PS4 looking title to date. 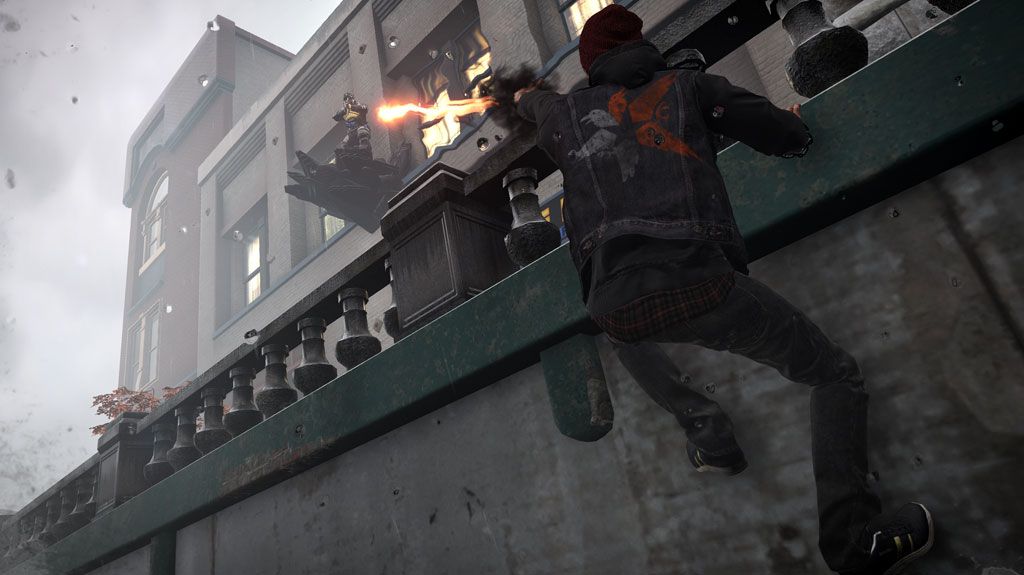 Perhaps that last statement is significant and should be expanded upon. Infamous: Second Son is indeed a fantastic looking game. It features the same great high resolution textures and effects like those in Killzone: Shadow Fall, but what helps the game stand out is the attention to detail. Water reflections while it rains look incredibly accurate, the particle effects are the best you’ve ever seen, and power abilities all look fantastic. On the whole though, there are still elements that are rather basic, with many of the NPC animations being rigid and unnatural. As well, the audio mix seems off, with loud character voices but explosions that don't pack a punch. Ambient soundtrack is often monotone and repetitive, sometimes clashing and even overlapping with the combat music.

The city of Seattle itself is highly detailed, even more so than the previous Infamous entries and even closely on par to last year’s Grand Theft Auto V, though of course on a much smaller scale. Still, this is an absolutely visually impressive game and a technical achievement that continues to show what’s possible on the next generation of consoles. The impressive lighting changes based on time of day, and there are some great vistas seen from the top of buildings, where players spend most of their time. Unfortunately, the city lacks personality, perhaps because so much time will be spent on these rooftops. Compared to Cole’s grinding on low power and rail lines, rooftop traversal is easily the best option in Second Son, thus your interaction with pedestrians is limited. Even so, their reactions and behavior is generic and hardly distinguishable from the previous games.

Once you’ve got a hang of the basic smoke power and had enough time to ogle the visuals, the main Second Son experience begins. This is still a third person action title, with no significant changes to how the action plays out. You’ve got ranged attacks of various function as well as a melee attack to take down the DUP. While Cole was only capable of controlling electricity, Delsin is more of a superhero, being able to actually control more than one element. Over the course of the game, you’ll be able to unlock four main powers – the first two being smoke and neon, the other two best kept under wraps to avoid spoilers. Each of the powers offers their own version of the same attacks – basic ranged attack, special ability, grenade-like attack, and a movement function. 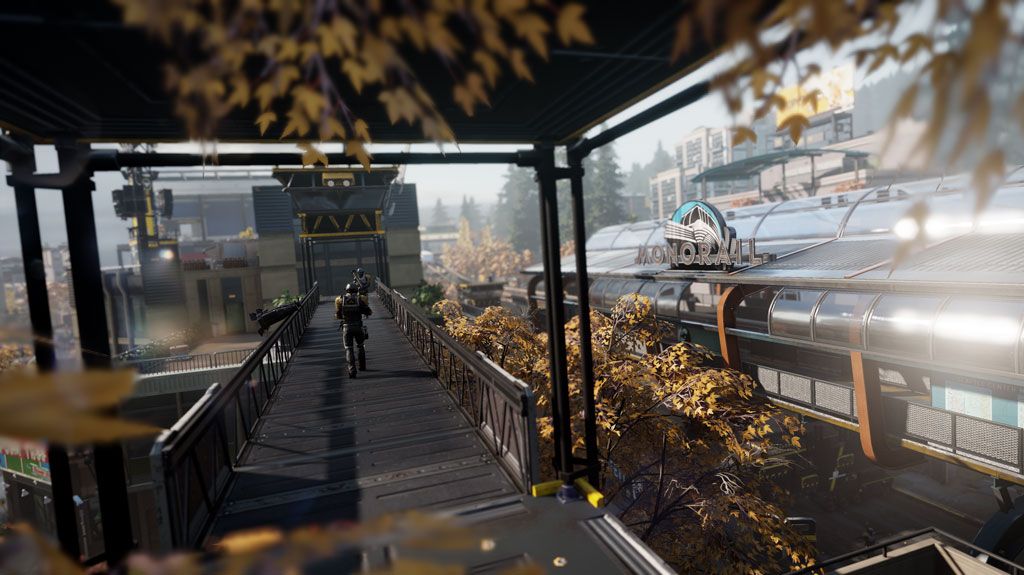 For example, smoke lets Delsin turn into a mist and dash forward a bit, possibly through a fence, instantly launch rocket-like smoke projectiles, and toss a grenade to make enemies start coughing and be vulnerable to takedowns for a short time. Switch to neon, and your grenades now cause temporary anti-gravity fields, trapping enemies helplessly mid-air; while you blast them with a strong beam of light that needs a short charging time before firing. All of the controls remain the same, so your grenade ability is assigned to the same button with every power. Overall, the combat offers players an opportunity to make use of all the powers you have available in the area, and use your favorites. As has been mentioned, the later powers are most effective and even overpowered, so hopefully players won’t be frustrated by the early experience and at least make it through to the second and third powers.

As you switch to other powers (strictly tied to story progression), you become much more mobile with the ability to traverse any terrain as a glowing orb, in any direction, akin to Prototype. The other powers also offer this type of free-form movement, so players aren’t forced to manually climb ledges and similar traversal tasks. That’s good not only because these methods are extremely freeing, but also because the basic platforming in Second Son is rather poor. Compared to previous games, where climbing was a big part of the game and performed well, Delsin seems to be very awkward to control and has a knack to clip through and glitch around the environment, making climbing a chore. The camera can also be rather awkward in combat. 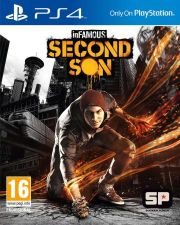