A fall from grace

I don't want to begin with something so typically... well, journalistic, but today I have an anecdote for you. Just over a year ago, after watching several Twitch streams and being egged on by a friend, I purchased a game on Steam that went by the name of Dark Souls: Prepare to Die edition, and it can't be said that it left a good first impression. Alright, let's be more accurate: if the game had caused my monitor to spontaneously explode outwards, embedding a thousand shards of broken glass in my face and upper body, causing unending agony and permanent disfigurement, it still wouldn't have compared all that badly to what I actually ended up with. The controls were ghastly, the interface was abominable and the lack of video options made the whole game look like it was taking place through the wrong set of glasses. I turned it off about ten minutes in and declared it, without irony, the “worst port evarrr” [sic], vowing to never touch it again as long as the sun rose in the east and set in the west. Several fan-made patches and over a hundred hours of gameplay later, it now sits very comfortably in my internal catalogue of “games you absolutely have to play, no seriously dude”. Quite a reversal of fortune, but it just goes to show how a bad port can totally rub mud all over what is otherwise a brilliant experience. Your game could be filled from beginning to end with content so spellbinding that a mere few seconds of gameplay is enough to unlock some kind of internal epiphany in the player, but it's all effort down the drain if the version they're playing is so ill-fitting with the platform of choice that the mere act of interfacing with it is like trying to decode a Caesar cypher where the alphabet is replaced with a series of obscure button maps. 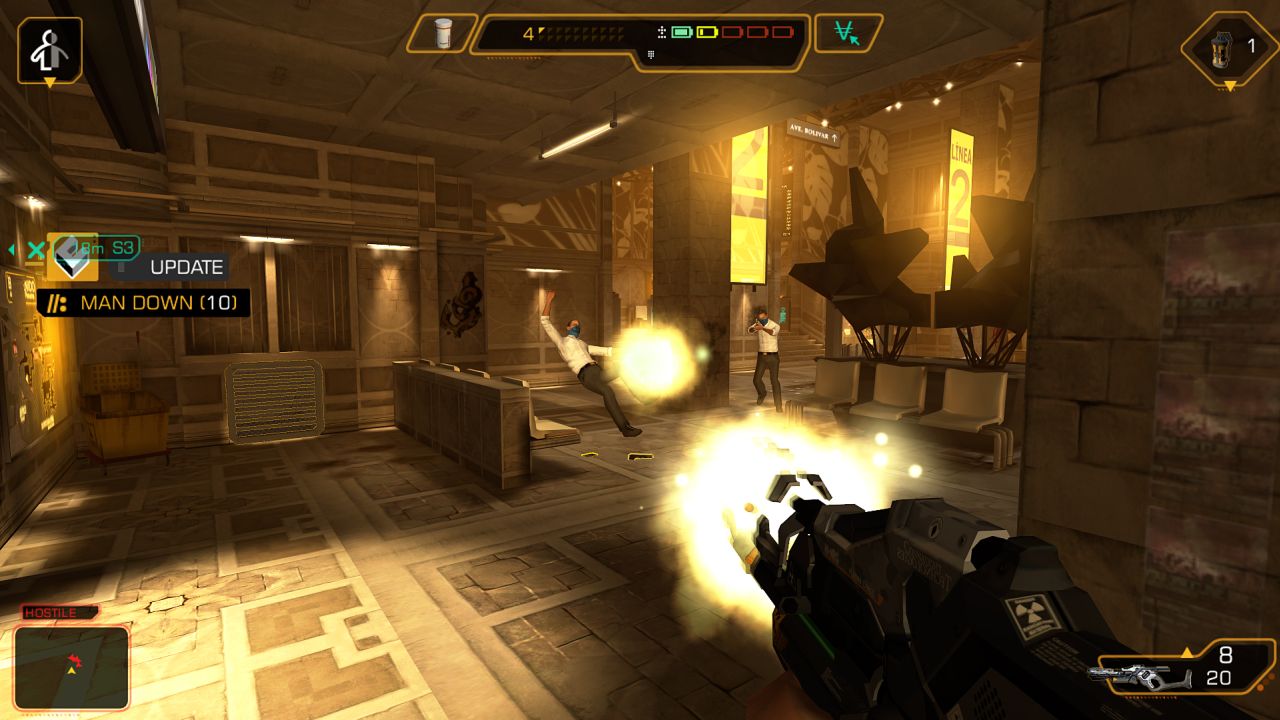 Well well well, look who it is. Hello again, Square Enix. Didn't see you there. Come in, pull up a chair. What's that? Deus Ex: The Fall ported to PC? Good. Did somebody finally break through to you with the information that releasing a Deus Ex game exclusive to mobile platforms was like releasing a series of The Far Side comics exclusive to toilet paper rolls? Actually, don't answer that. You know, it's funny how coincidences pop up, but we were just talking about ports. I was just pointing out how much a bad port can turn people off a perfectly fine game, but of course, you would know better than... oh dear.

Alright, there's no kind way of saying this, so I won't bother trying. Deus Ex: The Fall is utterly broken.

Let me walk you through a typical gameplay section. I'm approaching an area with some goons in it when my support character tries to ring me up. For whatever reason her dialogue sound clip doesn't play, and the subtitle flashes up for maybe a tenth of a second before disappearing. My reply has a similar effect. Totally flummoxed, I hit Esc to bring up the game menu, then I click on the icon for the objective tab. Nothing happens. I click on it again. Nothing happens. I let loose some choice expletives under my breath, click it a third time and it actually works, revealing that nothing significant has changed. I close the menu and continue on my way, wincing every few seconds when my camera randomly changes direction and jumps around for no particularly good reason. Seeing the goons on the radar, I hold down 'H' – no, you can't rebind the keys, put your hand down – to bring up my weapon menu, which pauses the entire game. I select the tranquilliser crossbow and return to the game, getting an eyeful of the breathtakingly-ugly view-model as I do. Pushing on through the headache-inducing camera stutters, I take cover behind a crate and watch as two guards patrol up and down with awkward, robotic walking animations. Trying for the safer option, I raise my crossbow and ready a shot against the more distant guard, forgetting that it only zooms in when you hold down the trigger and only fires when you release – you know, because that's a logical system for a PC game – causing me to miss him by several meters. Throwing caution to the wind, I extricate myself from behind the crate, sneak up behind the closer guard – whose walking animation has bugged out, causing him to skate around the room on unmoving feet – and silently take him down, with the 'silence' in this context not being a result of my secret agent skills, but rather a result of the sound dropping out again. The animation causes the camera to briefly clip into the floor, giving me a moment of disorientation that's enough for the other guard to spot me. Bringing up the weapon menu again, I take out my pistol and start firing – no sound for that either, naturally – missing every other shot because the mouse sensitivity is so sticky. Rapidly running out of health, I take cover behind another crate, at which point I go the way of the camera and end up clipping through the floor, falling into the emptiness of the void and, as a by-product, dying. My surreal outsider's view fades into the distance as I fall further away, the screen turning a sweet mocking red as the HUD breaks down. With a heavy sigh of resignation and defeat, I hit 'quick-load'. It's the fiftieth time so far today. 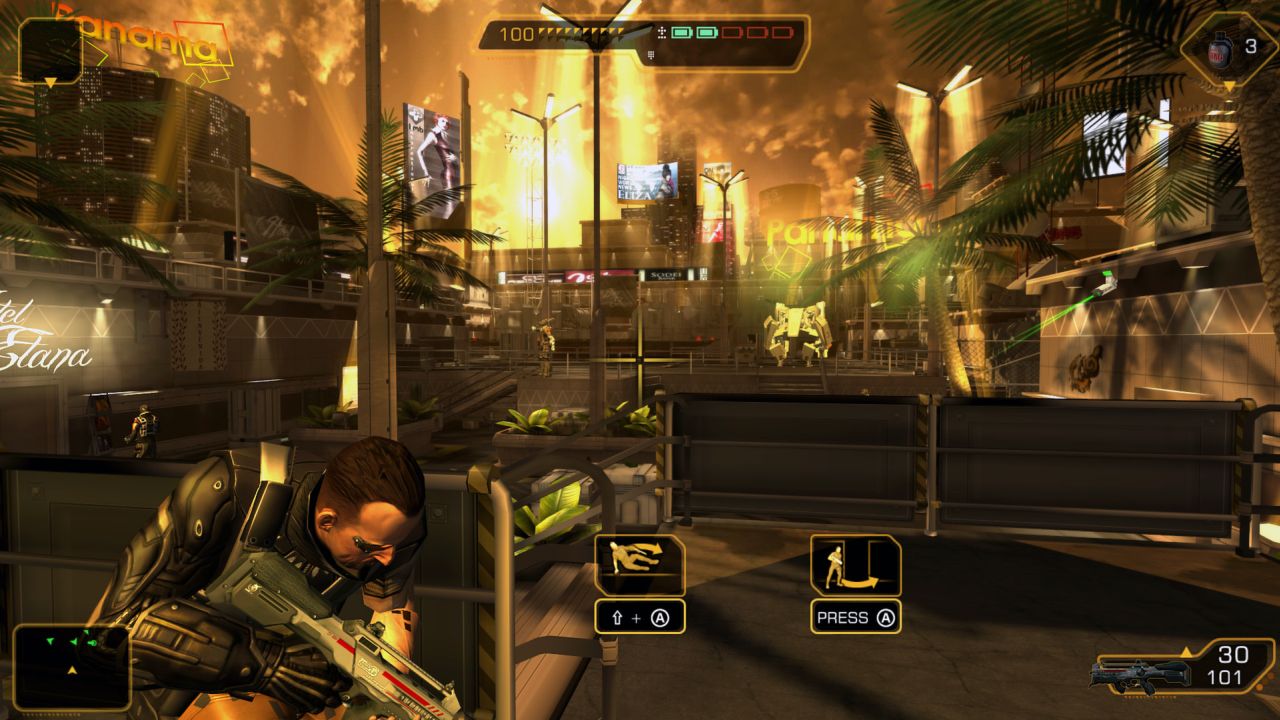 So, here we have a port that was quite clearly not ready for release, and absolutely wasn't ready for release a week earlier than initially intended. Quite frankly I don't know why they even bothered to port it at all if it was going to be as shoddy as this, but now this malformed spawn is nevertheless part of our world, and we're going to have to work out how to deal with it. Get it on the autopsy table; we'll see what we can do.

Around the time of The Fall's initial release, a number of murmurs of praise echoed their way down the intertubes and into my ear-holes, but they were all essentially nullified by the most common phrase, “good for a mobile game”, which inspires about as much confidence in the final product as saying that a newly-released book is “good for a randomly-selected collection of Sailor Moon fan-fiction”. Being a good mobile game doesn't mean anything. You could hack out a quick Bejeweled clone where all the sprites are replaced with study photographs from the local hospital's burns treatment unit, and it would probably still be a better game than the frankly depressing landslide of zero-effort rip-offs, dress-up simulators and Flappy Bird clones. So what has Square Enix done to ensure the quality gulf between mobile and PC is effectively bridged here? They've, erm, added some Steam achievements. Fan-tastic.

One thing that actually does make a good mobile game is an intuitive interface, and I'm sure that The Fall's interface was indeed very intuitive for an entirely touch-driven game. Lots of big icons, a bit of swiping, HUD elements that double-up as buttons, that sort of thing. Unfortunately, here in PC land, we don't use an awful lot of touch screens. We have these things called 'keyboards' and 'mice', and The Fall's interface has only the vaguest idea on how to actually utilise them. I've already moaned about the mouse movement and the unresponsive buttons, but they are only at the forefront of a whole landslide of bugbears. Where's the hotbar? Actually, where's the inventory screen? Horrifically squashed into the same space as the shop screen, I discovered, and unceremoniously stripped of its space-management mechanics. Nothing is ever done quickly with The Fall's interface, not when an endless parade of full-screen menus and game-halting quick-select bars stand between you and your goal. It would have been irritating enough even if they had worked perfectly, but the slow responsiveness – or occasional total lack of it altogether – multiplies the problem tenfold. 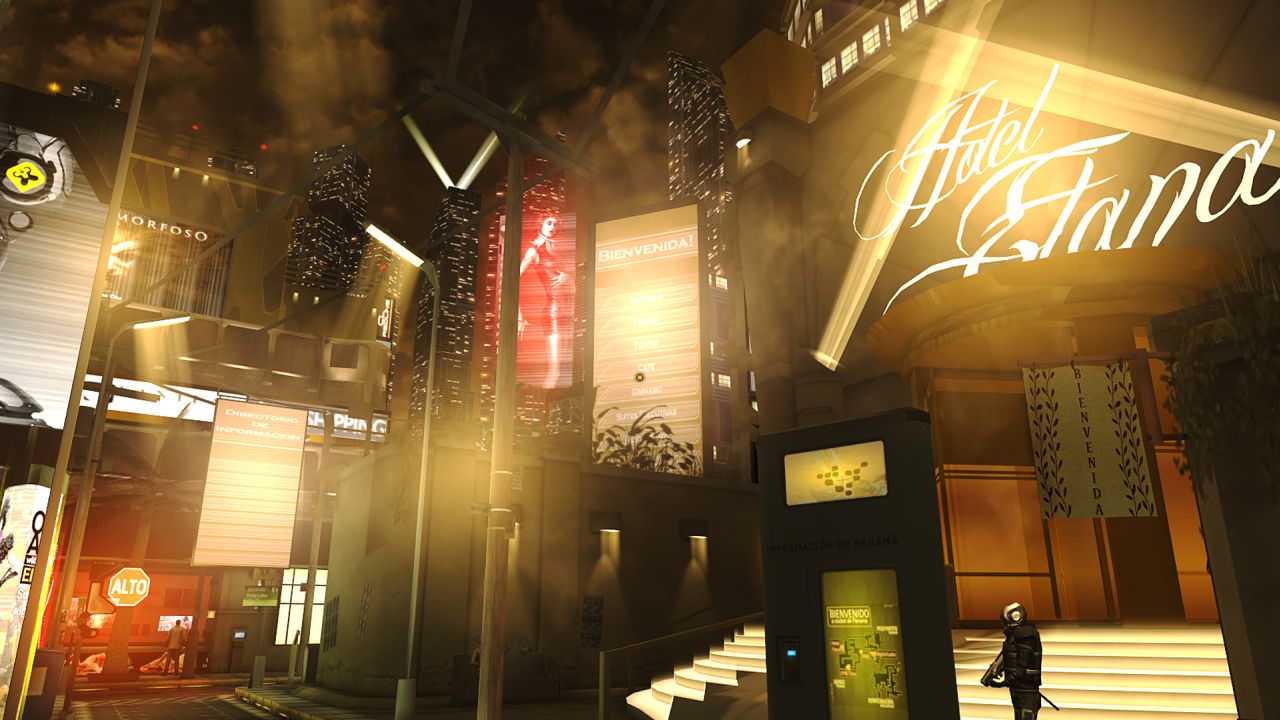 To N-fusion's credit, a lot of effort has gone into making The Fall look and feel like Human Revolution, and it mostly pulls it off. Heck, I'd even say it improves on its bigger brother in some respects. The abnormally-narrow streets of Panama City, the game's hub area, certainly give a far stronger cyberpunk vibe than anything Human Revolution ever pulled off. Of course, the game's mobile origins and already-established ambition to be a completely half-baked port mean a drastic graphical downgrade, but I think we can let this one off lightly given that the overall aesthetic is effectively preserved. Well, that and the fact that I feel dirty all over when I start complaining about a game's graphical fidelity.