There has been something of a resurgence of action RPGs in the last couple of years with the likes of Diablo 3 and Torchlight 2 garnering strong followings and many sleepless nights from fans. However it is a newcomer to the genre from a little known New Zealand studio Grinding Gear Games who have managed to craft the most enticing experience of the bunch, and it won't cost you a cent to fully enjoy it. Path of Exile is a grimy, beautiful and richly detailed game that offers up a substantial amount of content that can be experienced by yourself or with up to five friends, requiring only a somewhat capable PC and a stable internet connection. While initially familiar, Path of Exile has some unique components that make for thoughtful progression and extremely flexible character building, although the always-online nature and brisk re-generation of previously visited levels results in some annoyances along the way.

You start the game washed up on a beach as one of the five basic classes with only rags and a crude weapon. From here you must slowly make your way inland, eventually leaving the coast behind in favor of dense jungle, fetid swamps and yawning caverns. The game keeps verbal exposition to a minimum, and instead opts to tell you the story of the setting through superb environmental detail and variety. I found myself excited to enter new areas to discover what interesting locale awaited on the other side of each barrier. You might go through a door to find yourself in a grim, dimly lit dungeon, a sunny beach or a forest full of bandit encampments. Levels are randomly generated each time you visit, so the exact layout never remains the same, but the mood of an area is almost always distinct and captivating. 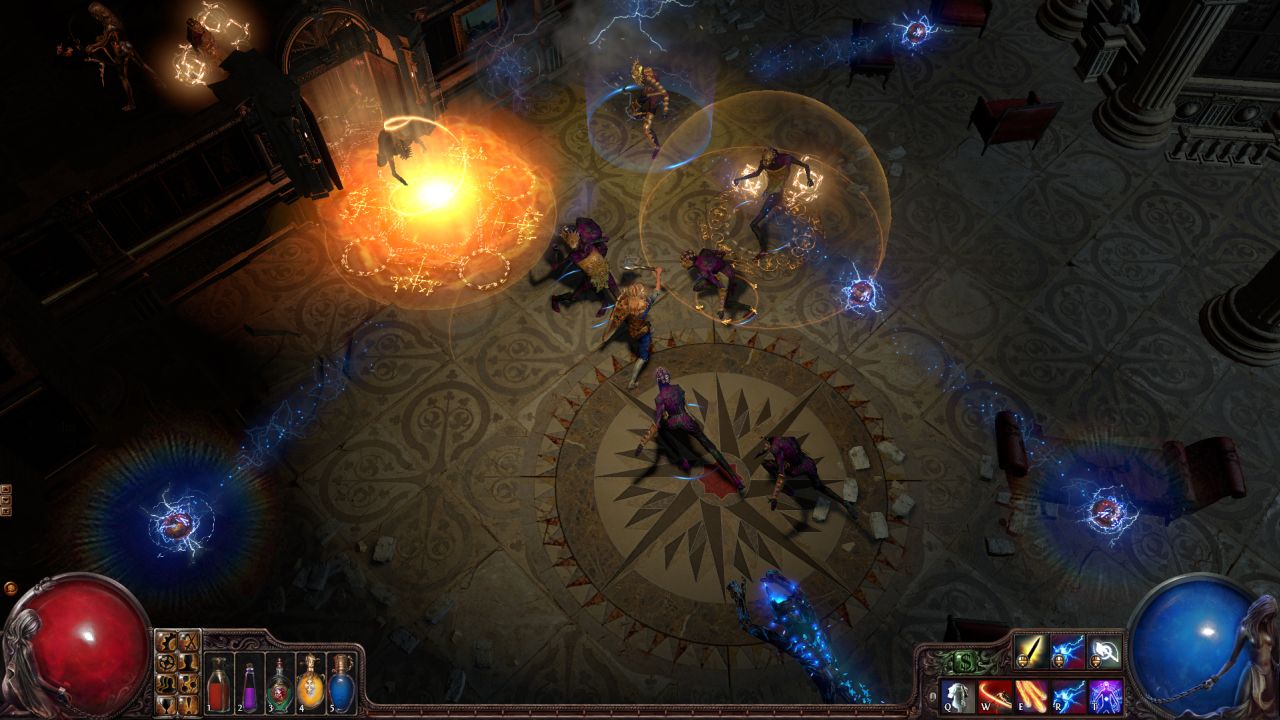 As you guide your character through this remarkable world, you will have the opportunity to specialize your focus in a number of ways. First and most daunting is the almost impossibly large and intricate skill tree that will amaze and confound the first time you open it. However, zooming in on its center and slowly assigning points is a surprisingly straightforward and satisfying process. The default characters only serve as guidelines for what they might eventually become, as all characters can access any type of skill if they choose their course through the skill tree carefully. The dualist, for instance, can put points into dexterity or strength in equal measure, meaning you can turn yourself into a dual-wielding, hit-and-run character or a tank who infringes on the territory of the Marauder class who favors heavy weapons and armor.

The mechanism that sets Path of Exile apart from other games in the genre is how it handles special abilities. Each weapon and piece of armor contains a number of colour coded sockets. You will find gems to fill these sockets, and these gems provide you with special attacks and bonuses. As you use these attacks, the gems level up. Eventually you will be forced to make tough decisions about whether or not to take an item that is much better than what you currently have but has slot configurations that will reduce the number of skill gems you can equip. The further you get into the game, the more gems you accumulate, making careful customization of your characters loadout a thoughtful, rewarding and potentially agonizing process.

The combat itself doesn't stray too far from other games in the genre; you can assign different attacks granted by your various gems to a variety of hotkeys and try and use attacks that a particular enemy or group of enemies is weak to. The combat largely feels weighty and responsive, and some abilities offer up interesting passive and active effects. Potions are handled in a rather unique way; you can assign up to five flasks to dedicated hot keys, and they recharge as you kill enemies. Most flasks restore health and mana, but occasionally you will find flasks that provide other bonuses, like the quicksilver flask that increases your movement speed for a short period of time. 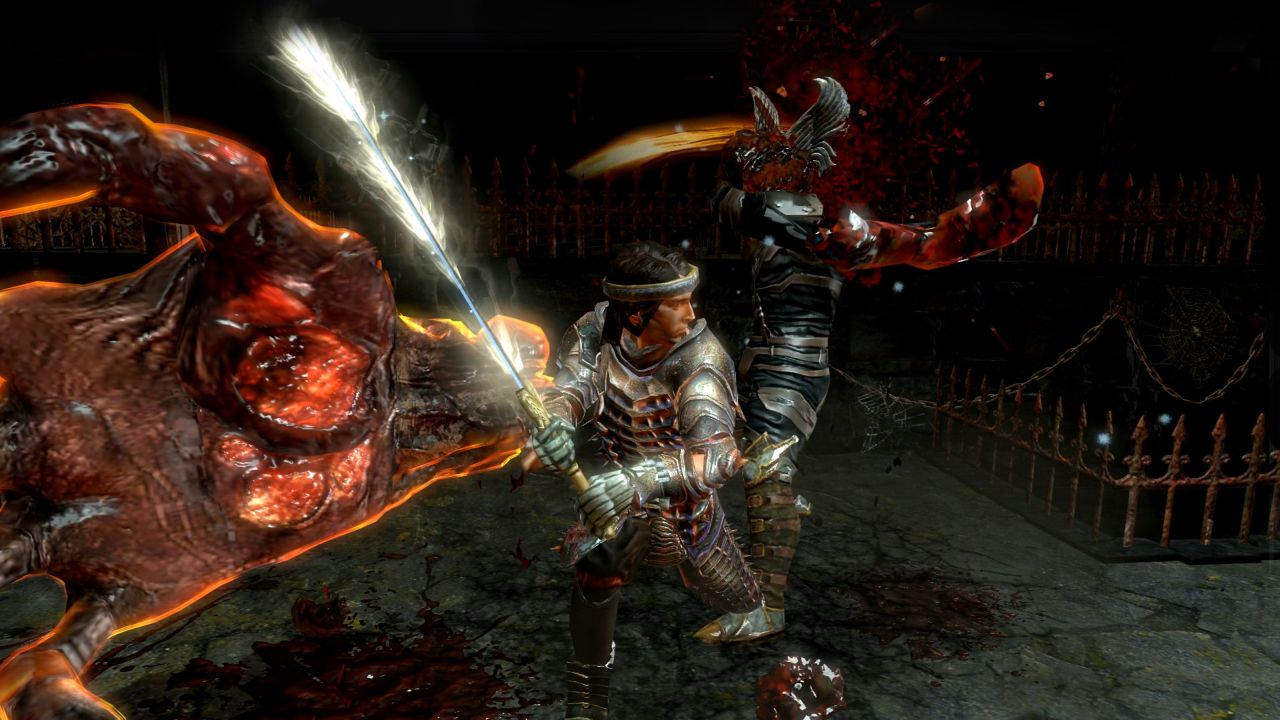 Another major difference between Path of Exile and its peers is the way the in-game economy works. There is no official currency; instead you barter for items between traders and other players. Enter a town and you will suddenly see other human players running around all over the place, talking to NPC's and trading for better equipment. Scrolls of Wisdom, which are used to identify magic items, are the most common form of currency, although specialized stones which can permanently upgrade or alter weapons and armor are also commonly used. If you want to play with friends or strangers rather than by yourself, the game is very accommodating, allowing you to form public or private parties. As with other ARPG's, adding additional players increases the difficulty but also the enjoyment as spells fly and loot drops are frantically fought over. You can even choose how the loot is distributed amongst party members.

The always-online nature of the game does have some drawbacks, with the greatest being occasional lag and desync issues. At times, enemies will remain motionless and ignore you for a few seconds, only for the server to catch up resulting in instant deaths. Other times, there will be frustrating delays between when you attack and when the attack actually connects with an enemy. These issues are infrequent, but can lead to frustration when they crop up. Another related issue is the speed at which areas and enemies regenerate. You might clear an area, spend 30 minutes in subsequent areas, and come back to the area you previously cleared only to find it repopulated with enemies and with the terrain changed totally. There is no arrow or quest marker to indicate where you should go for the quest; it's easy to get lost in an area you already explored.

This random generation can also make it very difficult to find waypoint portals that allow you to fast travel back to towns. I found myself playing much longer than I intended on a few occasions because I simply could not find a waypoint portal and I didn't want to have to go through all the areas I had covered again. It is nice having levels that are varied each time you go through them, but the random generation gets in the way as much as it adds variety and replay value. 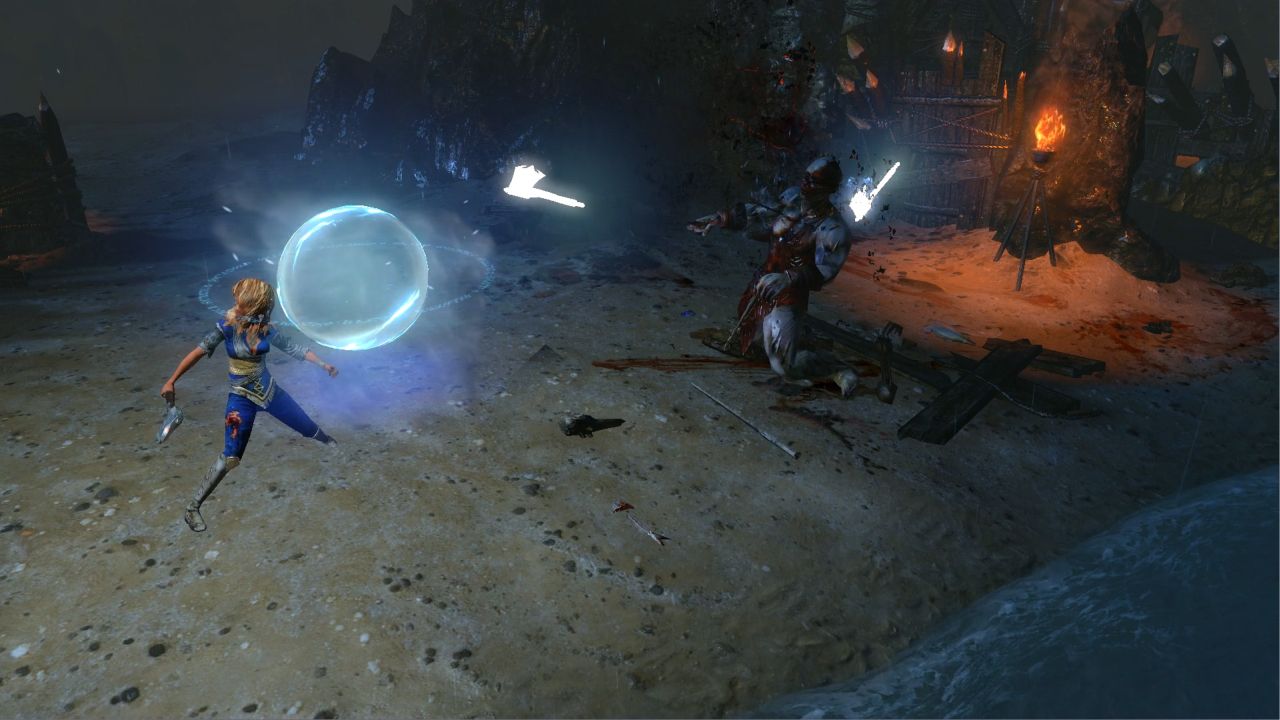 Helping to mitigate the annoyance of fighting through the same area multiple times is the outstanding visual design. Levels are visually striking with distinctive art styles supported by excellent lighting, detailed textures and varied enemies. Monkeys will climb down trees and throw rocks at you, statues will come to life and stab you with lances and creepy squid things will swarm you in the damp caverns. The game runs surprisingly well considering this visual fidelity, with even my mid range laptop running the game well while allowing it to look great. The audio, while competent, is less remarkable with unobtrusive ambient music underlining the grimy nature of the game's world. Spells, swords and bows all sound appropriately hefty, lending combat a satisfying feel, although when enemies reactions are delayed due to network lag the satisfaction of combat is reduced.

On top of the normal campaign mode are a variety of different leagues with varying difficulties and loot parameters that help incentivize replays with higher level characters. Once you finish the game, you unlock the Scion class which is basically a blank slate you can build however you like. There are even some PvP elements if you want to see how your character fares against others, although I personally did not delve into them. A single run through the game's standard Domination league will take you about 20 hours if you pursue all of the side missions, with each of the three acts taking increasingly long to complete. The difficulty early on is low in this league, although things ramp up once you get to act three, meaning careful character building and ability choices are necessary early on.

As a free to play experience, Path of Exile's model is almost overly generous. The default characters designs and stash space, the only aspects which can be altered by dropping a bit of cash, will not leave you feeling like a second class player. It's easy to recommend trying the game out when it does so much right when there is no cost to doing so, and the developers have so far been religiously updating the product and slowly adding new content. Free or no, this is a great Action RPG that fans of the genre will no doubt relish.

80
The game is very well optimized but the server-side enemies sometimes have delayed reactions to attacks with infrequent bouts of server-side lag.
Overall
83
A tremendous action RPG that can be fully enjoyed without costing you a cent with outstanding visual design and a tremendous character building system. 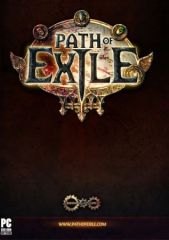