Saving the future, one dialogue tree at a time

It would hardly be an insightful observation to say that a lot of videogames revolve around combat. Of course they do: it's exciting, fast, visceral, and one of the few things you're not allowed to do without signing several extremely weighty forms and opening yourself up to the possibility of bleeding out alone hundreds of miles from home. Combat, and its beautiful mistress, violence, are the bricks and mortar of gaming, but their inclusion can make for some seriously contrived departures from common sense in the mysterious multiverse that all games occupy. For example, few games will let your opponents unconditionally surrender, and even fewer will let the player do it. Diplomacy is something that happens in dry turn-based strategy games, not on the ground-level with bullets flying past where it would be infinitely more useful. Even Deus Ex, regarded by many as a paragon of freedom of approach and generally one of the greatest games of all time, rarely provided non-violent options beyond the occasional dialogue test or circuitous sneaky route. No, creeping up on a mercenary and jabbing your futuristic cyber-taser into the small of his back does not count as 'non-violent'. So, my door was wide open when Consortium turned up on the front steps, professing to be the first-person role-playing answer to my somewhat pacifist wishes. To its credit, it even managed to hold my attention for quite some time before the massive internal haemorrhaging began. 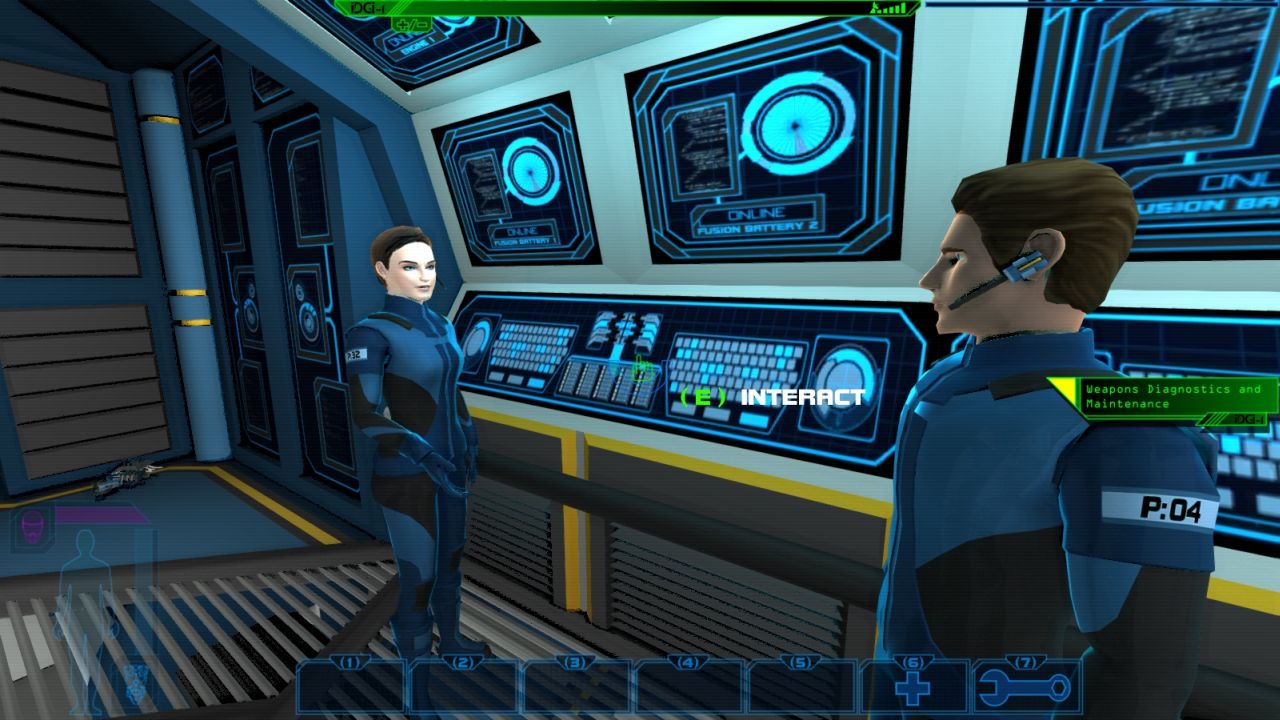 Certainly, Consortium doesn't waste any time impressing upon you the fact that it's going to be something a little bit different, for better and for worse. You are Bishop Six, a sort of futuristic bodyguard-stroke-diplomat with some unspecified role in a big nebulous authoritarian body called the Consortium, which took the sensible route of basing its ranking system on chess pieces rather than, say, Monopoly. You've been assigned to the spaceship Zenlil, notable for not actually flying into space or being a spaceship (it is, if the view through the windows is anything to go by, just an oversized Airbus with some spacious interior design). Except none of that is true, because you're actually some prat sitting at a desk, probably procrastinating far too much, and Consortium is strangely keen to acknowledge this as part of the plot. The essential premise, which took one look at the concept of a fourth wall and decided it was above something so petty, is that the game is not a game at all, but a communications interface for an orbiting satellite put in place by the developers. This satellite opens a digital rift to the distant future, allowing you to remotely take control of Bishop Six in an alternate timeline and manipulate him in order to... oh crikey, are you reading this? It's been a while since I've been exposed to science fiction so soft that you could pack it into boxes and use it to mail out fine china.

All gentle ribbing aside, there's no denying that it's an interesting framing device for the plot. Unlike, say, Assassin's Creed, projecting yourself into the body of Bishop Six comes with a few unfortunate side effects, many of which are worked into the gameplay and plot with varying levels of effectiveness. For example, it means that on top of performing your duties as a Bishop you must also conceal your real identity, which becomes a trickier task than it sounds when people start to inquire into your back-story. It just feels like an uncomfortable concept to swallow for an otherwise mostly-immersive game, a little sharp nub of nonsense sitting in the middle of what is otherwise a fairly grounded piece of science fiction. Part of my immersion in any work of fiction stems from the understanding that it takes place, in some way, 'elsewhere', because that allows for everything, right down to the fundamental laws of physics, to be bent in the name of narrative freedom. As long as it was made clear that it took place in an alternate reality, you could have Captain Picard and Stephen Fry riding robot unicorns through the Negative Zone on the very first page and I still wouldn't bat an eye (as a matter of fact, I'd be downright entranced). It's only when you try and tie the fiction to something in the here-and-now, moreover something I'm quite capable of disassembling and examining in minute detail at any time, that I start to huff and harrumph and make grunting noises of a dissenting nature. I know for a fact that your game isn't a digital portal, Interdimensional Games, because reality doesn't bug out this frequently. 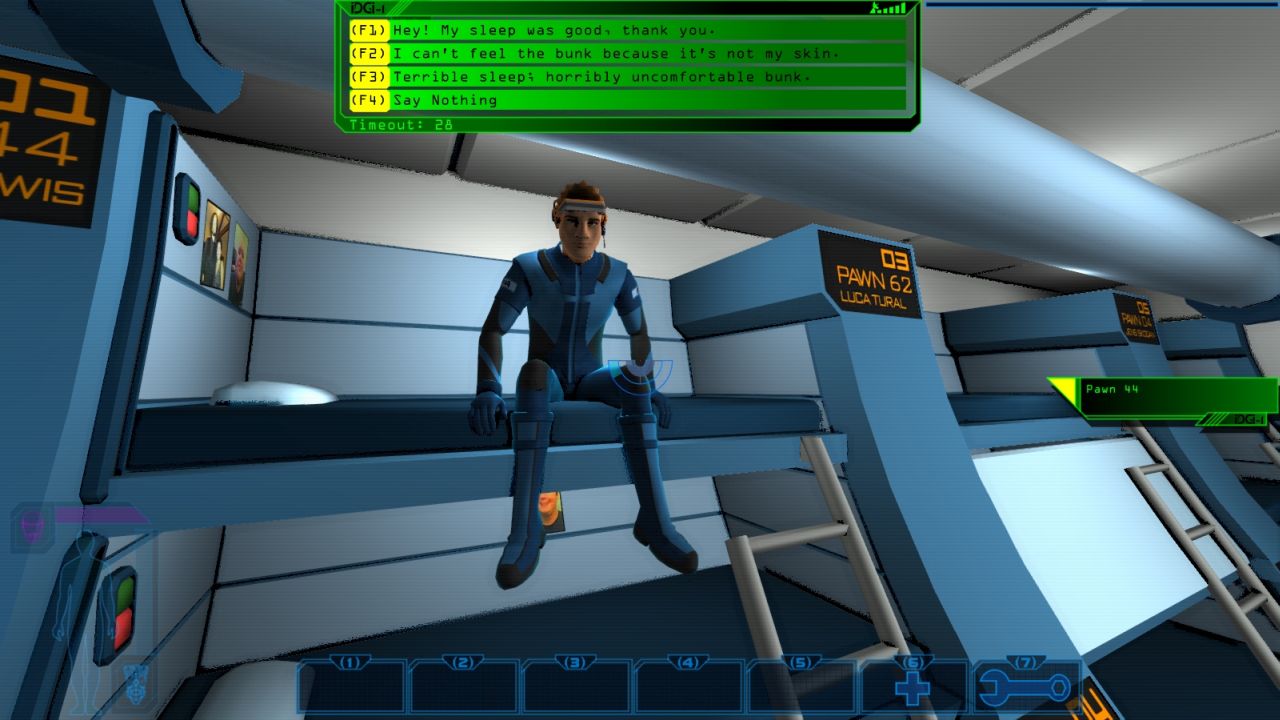 Let us move on under the pretence that you have internalised this abject silliness. Consortium is a role-playing game not in the traditional sense – wherein you must drag half a character sheet along for the ride and pour points into it until you're better than everybody else at hitting things with a sharpened stick – but in the sense that you playing a character's role, controlling their development throughout the game and deciding whether they're a truly terrible person or just a mostly terrible one. Naturally this results in an almost entirely dialogue-powered game, which conceptually I rather like, but it does make the entire thing feel like one long drawn-out intro sequence when it establishes so many combat mechanics and then barely utilises them. An obscene amount of your time is spent aimlessly bumming around the ship while your assorted weapons, inventory and energy systems slowly gather space-dust. It's nice that the game doesn't skip on depth, but it just feels poorly focused, as if the majority of the team were working on a far more action-oriented title before the lead designer groggily emerged from his pillow fort and yelled “I've changed my mind, we're cutting ninety percent of the combat to make room for more dialogue trees.”

Another thing I'm not okay with is that the dialogue trees in question don't seem to have nearly as much of an effect on the path of the story as the game emphasises. You are encouraged to quicksave often, play through multiple times and explore alternate paths, so in the interest of getting the most out of my grubby twenty dollars I organised three separate runs through the whole game: once as an amicable angel, once as a snarky git, and once, taking full advantage of the 'Say Nothing' dialogue option, as Gordon Freeman. While the latter two were entertaining in their own way, as the various members of the crew struggled to deal with my antisocial antics, their differences were questionable at best. There are a handful of points in the game where you can make a noticeable difference to the events at hand or spin off into a brief side-show, which is quite admirable in its own way; but the vast majority will just alter the dialogue at hand and your reputation with the various crew members. This is something of a bugbear for me because my reputation didn't seem to have much of an effect on anything whatsoever. If this was a Mass Effect game I'd want to retain my reputation because it would open up new gameplay options, or grant me extra rewards, or because I secretly fancied a romance-able crew member and wanted to engage in some private galactic diplomacy with them. Consortium doesn't appear to offer any such incentives, rendering the whole thing essentially useless. 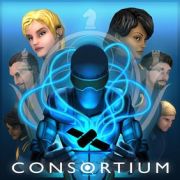