Nintendo has revealed new information about Mario Kart 8, the latest installment in the racing series launching exclusively for the Wii U.

For the first time in HD, Mario Kart 8 introduces original track designs that highlight the game’s new anti-gravity feature, which allows players to race upside down or up vertical surfaces. Racers will also get a variety of series-favorite features, including the return of 12-player online competitive play, four-player local multiplayer, hang gliders, underwater racing and motorbikes.

While racing upside down or on walls, players can bump into other racers or certain track obstacles to get a speed boost. Two new items join the fray, first is the Piranha Plant that attaches to the front of the player’s kart and chomps at other characters, banana peels on the track or even shells thrown by other characters. The second new item is the Boomerang Flower. After acquiring it, racers can throw a Boomerang at opponents to stun them, and its arc allows players to strike multiple opponents with a single toss. 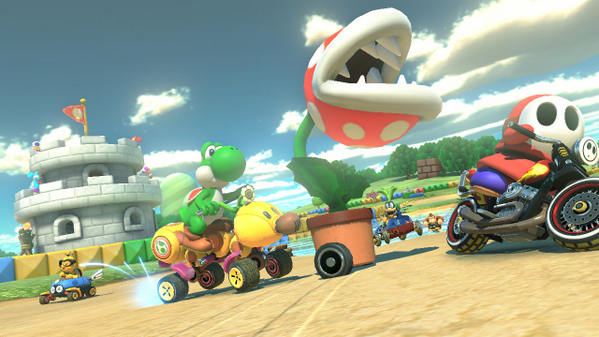