When Mario Kart 8 boots up you’re welcomed by a high-pitched shout from Mario himself, greeting you to his game, before a funky, self-satisfied baseline follows. This is a confident game from the off that knows its main aim is fun, and more importantly, that it has it in spades. Come on in, Mario gestures, we’ve been waiting for you.

Mario Kart 8, at its core, is exactly what you’d expect from a Mario Kart game, whether you’re jumping in hot off the heels of 7, or haven’t played one since the days of the SNES or N64. Mario, Luigi, Yoshi, Bowser and co. race through 32 colourful tracks (16 brand new, 16 remade retro courses) in a hodge-podge, arcade-y blur, firing shells at each other and dropping banana skins. But you already knew that, right? So what’s different this time around? 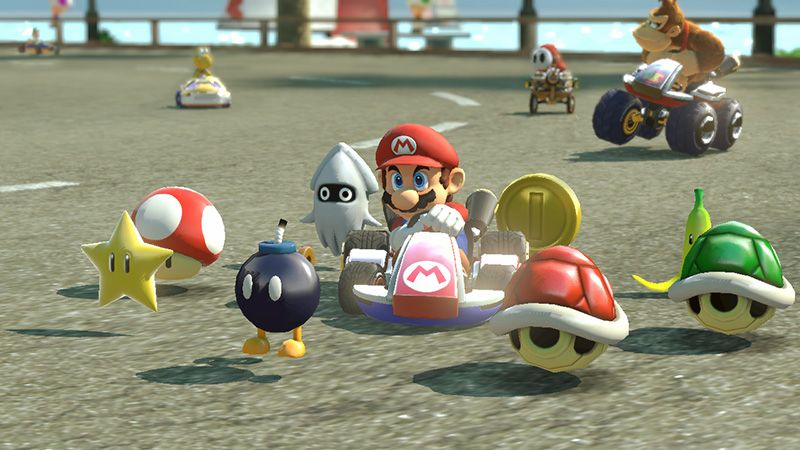 First off, let’s talk visuals. Mario Kart 8, in my opinion, is the best looking game on the Wii U and therefore the most detailed and refined looking game Nintendo has ever released. Honestly, it’s that great. Normally the Mario Kart series just looks ‘good’ but finds itself outstripped by its platforming brother on that system – not so here. Yes, Super Mario 3D World is a great looking game that really pops in HD, but the attention to detail and high-end polish on Mario Kart 8 easily trumps it. It’s the grain on the road, the patterns on the tires, the wet-slick look of just-rained on surfaces, and yes, the wiggling of Mario’s moustache as he zooms through the air. The colours have been dialed up to eleven and basically it’s videogame eye candy through the lens of bubblegum and rainbows. I think I feel a bit sick.

But fortunately the sickness is kept at bay by the smooth-as-silk 60fps. Even in 2-player split screen and online, the frame rate doesn’t jolt and it’s a key factor in the smoothness and fluency of Mario Kart’s races. It drops down to 30fps or so when playing 4-player local multiplayer, which is a shame, but isn’t a deal breaker at all.

The real new ‘gimmick’ in Mario Kart 8, though, is anti-gravity. Just like twin-drivers, motorbikes and tricks before it, anti-grav is the new thing in the Mushroom Kingdom. At first it does seem just that, a gimmick, but in reality it has done for Mario Kart what Galaxy did for the main Mario series; it’s freed the designers up to make the absolute best and most diverse range of tracks in the Mario Kart series. 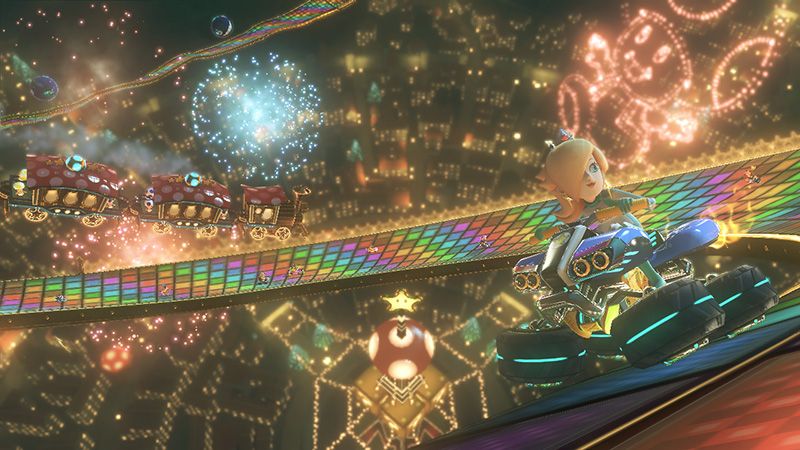 Whenever your kart hops over a blue line on the track, the wheels tuck up and hover with an electric aura. You gleam and glide above the surface, and although the handling is not much different from normal racing (and unless you’re driving up the occasional wall it still feel as if you’re driving flat) there’s an extra wrinkle to all the showiness. Whereas you’d normally avoid your fellow racers and obstacles for fear of crashing, in anti-grav mode when you bash into each other you get a speed boost. This is true of the person you’re bumping into as well, though, so things become tactical. Depending what angle you hit them at, you could zoom ahead as they boost onto the rough, slowing them down for a vital few seconds.

Returning from the 3DS’ Mario Kart 7, are gliding and underwater sections too, which to me seemed under baked in that game, but now come to full fruition in Mario Kart 8. Something about the anti-grav ties all three components together, and maybe it’s just the excellent level design, but they all feel like intrinsic parts of the Mario Kart experience now.

Nintendo seem to have reassessed and adjusted the way Mario Kart itself works as well this time around. The extreme rubber-banding of the Wii days are gone and there’s a tighter, fairer scheme in place, although it’s not quite as ‘anyone-can-win’ as it was before, which is both a good and a bad thing. Overpowered items pop up less frequently, including the infamous blue shell – that until now was an all-powerful weapon that took out anyone in first place, with no way to stop it.

Not anymore. On top of blue shells now being somewhat of a rarity in Mario Kart 8 – they used to appear up to three or four times a race! – there is now also a weapon to stop them: the super horn. It emits a sonic blast around your character that can destroy all attacks, including blue shells, and even knocks out nearby opponents. The other new items, the piranha plant that surges forward, chomping other racers and giving you a boost, and the three-use boomerang, fit into the weapon roster nicely, but the lucky 8 feels like too much of a rehash of the 3DS’ lucky 7 – an item of 7, or in this case, 8, weapons that causes complete carnage, usually to yourself. Rounding it out is the new coin item, which is more than entirely useless: it’s an item to stop you playing defensively, but actually I found the opposite to be true. 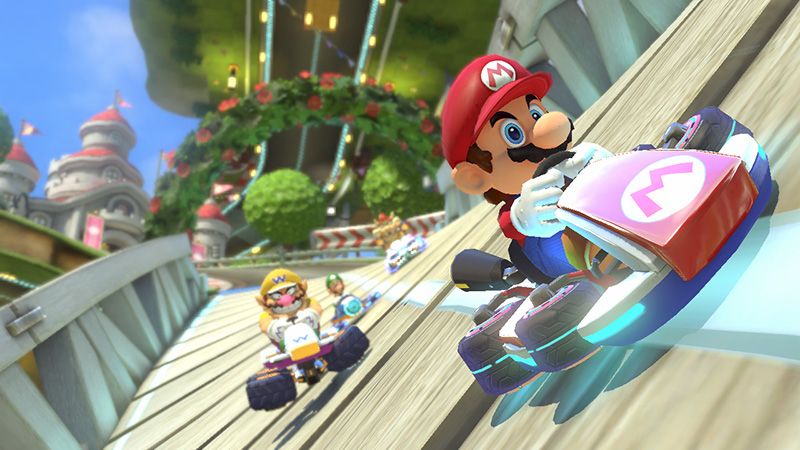 You see, you used to be able to hold an item such as a banana skin or shell, behind you defensively while still picking up your next, ready for an attack. This meant you’d fire off green shells and bananas like nobody’s business, knowing you’d get another in seconds, or would already have another waiting. However, the new rules in Mario Kart 8 mean that holding an item behind you still counts as filling your item box. Add in the fact that there are less opportunities to get new items this time around and it means that a green shell or banana – normally throw away items that would add to the chaos of the game – are kept longer for defensive purposes. This is doubly true considering the coin item I mentioned; it’s the item you’re most likely to get in first place and it merely adds to your coin total, which you can collect on the track anyway. This means that even if another item box was coming up, if I was in first place with a banana, I’d want to hold onto it for fear of being left for a large portion of the race with just a useless coin to defend myself!

Truth be told this adds more tactics to the game, and I’m still learning to adjust to it, but I can’t help but feel it takes a little of the mayhem out of Mario Kart too, which is a shame.

However, the online races pick up the slack in the mayhem department and frankly do not disappoint. Similar in layout and function to both the Wii and 3DS games, it’s a little on the simple side, but up to 12 player races are easy to get into in worldwide, regional and friend-only varieties. The races are blisteringly fast and frantic and are locked tight at 60fps even with 2-player split screen against 10 other racers. After whizzing through the games’ 8 cups, I spent most of my time online and I think it’s what will keep me coming back.

Having said that, besides online races there’s limited replay value at the moment. Although Nintendo have been doing 4 new cups and 4 updated ones for the last few installments of Mario Kart, I can’t help but feel that this time – and particularly on the struggling Wii U – we need more. Hopefully that will come in the form of DLC, as the other main game mode, Battle, doesn’t hold up its end of the bargain at all. 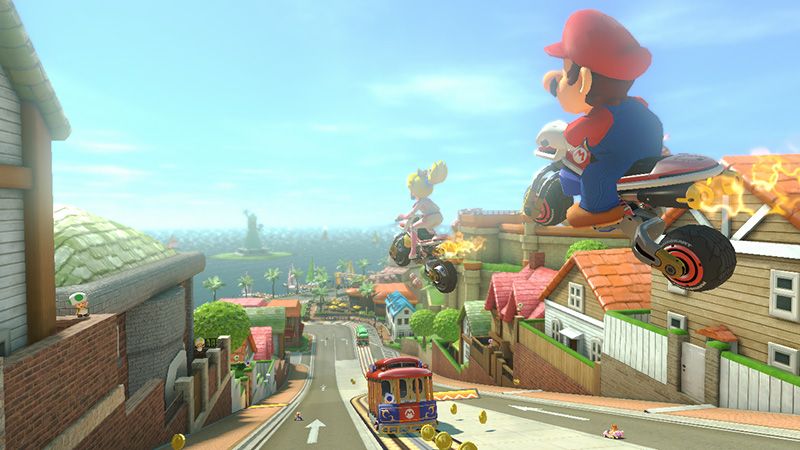 Battle Mode has been a staple since the very first Mario Kart on the SNES, but I can’t think of a time it’s felt like more of a side dish, an after thought. There are no arena modes at all, only a handful of repurposed racetracks. What this means for a death match style game is that you endlessly move up and down the track looking for other racers and all the frantic energy is sucked right out of it. The fact that when you die this time around, you come back as an invisible ghost – as you did on the N64 – means that often if you’re one of the last two standing you’ll be somewhat unfairly killed by a ghost you can’t see, or else the timer will run out because you can’t find anyone. As it stands, then, Battle Mode really does feel like something tacked on, and hopefully as well as extra race levels, Nintendo might also release some DLC arenas to fight on.

The last Big New Thing Nintendo has included in Mario Kart 8 is Mario Kart TV. Fundamentally, it lets you watch reasonably well put together replays of your races, where you can slow down and look at certain crashes and exciting moments in detail. These can be fun to watch with friends after a last second win in which you stuffed them with a perfectly aimed green shell, and can be uploaded directly to YouTube which is handy. However, I found the lack of a simple edit tool to be baffling; cutting and reordering you shots would have been a cinch on the gamepad and would have made the experience a lot more personal. Also the fact that watching the replay is the default option after a race, rather than selecting next course is more than just mildly annoying.

All in all, Mario Kart 8 is a fantastic arcade racer, and quite possibly the most robust and satisfying in the long and stories series. If you like Mario Kart, that should be enough. The handling is also spot on, even though it took me a while to find my perfect kart combo with the mix and match of bodies, tires and gliders, as seen in the 3DS version. The character roster, however, is a bit of a mixed bag; I enjoyed the koopalings’ appearance from Super Mario World, and actually Larry is my go to man, but 5 baby varieties and Pink-Gold Peach? Again, I can only assume the likes of Kamek and Nabbit are coming in DLC.

And that’s it really, Mario Kart 8 is a near perfect racer in what you get, but it left me wanting even more in most departments – a good thing really, and a sure sign of greediness! Lap up what’s there – pun very much intended – and just hope there’s more to come to give this excellent game the longevity it deserves. I’ll see you out on the tracks!

Our ratings for Mario Kart 8 on Wii U out of 100 (Ratings FAQ)
Presentation
90
A great looking game that pushes Wii U to its limits
Gameplay
95
The tightest, smoothest, most robust - and fun! - Mario Kart yet. That's it, it doesn't get any better.
Single Player
85
Who plays Mario Kart in single player anyway? Sure it's good for unlocking stuff, but you'll get bored pretty quick playing it this way.
Multiplayer
95
The very reason Mario Kart exists. Whether it's with buddies on the couch, or with idiots on the internet, Mario Kart 8 is a joyous experience when thrashing other humans.
Performance
90
Slick and stable at all times, never buckling its 60fps in single, 2-player or online. Things drop to 30fps in local 4-player, but it's still smoother than most.
Overall
93
The best game on Wii U, and the reason you'll keep coming back to it. Grab some friends and Mario Kart 8 simply won't disappoint.

All videos for Mario Kart 8 (7)
Advertisement ▼