Compulsion Games has said that its digital download adventure platformer Contrast has surpassed one million downloads on PlayStation Store.

This milestone includes downloads on both the PlayStation 3 and PlayStation 4. The title was released alongside the launch of the PS4 and was free for PlayStation Plus members, which likely helped gather player interest.

Contrast draws players into a surreal 1920s dreamscape. Players take on the role of Dawn, the imaginary friend of a little girl, Didi. She has the unique ability to shift from the 3D stage into the 2D shadowscape. Sadly, we found the game to be "underwhelming due to basic and unrefined platforming mechanics" in our Contrast review.

The title is also available on PC and Xbox 360.

Prev:
Tropico 5 coming to PlayStation 4
Next:
LocoCycle coming to Xbox 360 next month 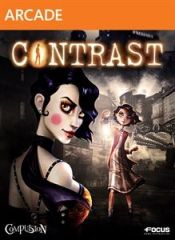 All videos for Contrast (1)