EA Sports has announced that the NBA LIVE 14 demo will launch on Tuesday, November 19 for PS4 and on November 22 for Xbox One.

Those looking for a full-game experience can jump into Tip-Off and play as the Cleveland Cavaliers, Oklahoma City Thunder, New York Knicks or Golden State Warriors. Players will also be able to enjoy Offline head-to-head matchups.

Those looking for a quick challenge take on one of five BIG Moments, ranging from last-second buzzer-beaters to full-quarter challenges. The BIG Moments are comprised of some of the most exciting performances of the young 2013 – 2014 NBA season.

Fans can also try LIVE Ultimate Team, taking on a series of Fantasy Challenges with an absolutely stocked Ultimate Team roster. Players will be able to take control of Kyrie Irving, John Wall, Victor Oladipo, Ricky Rubio, Damian Lillard and Kemba Walker and put the young point guards to the test in a series of matchups.

Madden NFL 25
Online
There are currently 0 members and 113 guests on the website right now. Who's On?
Activity in the past 10 minutes: 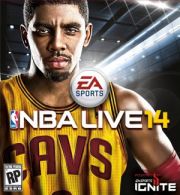