Bayonetta now available in the US

The first major title of 2010 has hit the store shelves

SEGA of America, Inc. today announced BAYONETTA TM is now available in the U.S. for the Xbox 360 video game and entertainment system from Microsoft and PlayStation 3 computer entertainment system. Boding well for the U.S. market, the eagerly anticipated action game has received perfect scores in Japan's Famitsu and UK's Edge, two of the most highly respected gaming magazines in their respective territories. The game also currently boasts a more than 90 out of a 100 point metacritic score, which is an aggregation of the review scores from the top gaming outlets in the U.S. and abroad.
BAYONETTA is a cinematic, stylized third person action game from the famed creative mind of renowned game developer, Hideki Kamiya of PlatinumGames. Bayonetta, the game's protagonist, is a graceful, gun-wielding witch who awakens after being entombed in a coffin at bottom of a lake for 500 years with no memory. As players embark on this quest with Bayonetta, they will begin to unfold the mystery behind her past and her purpose in the game, such as why she fights against angels and other countless fantastic enemies. In combat, Bayonetta uses weapons, magic, acrobatics and her larger-than-life hair to redefine the look and feel of the action genre.
For game details, visit www.sega.com/platinumgames/bayonetta/

Online
There is currently 1 member and 112 guests on the website right now. Who's On?
Activity in the past 10 minutes: 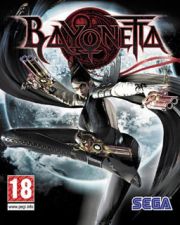 Our Review of Bayonetta
92%
Superb
The Verdict:
"Sega's super flashy action-fighter delivers for fans of the genre and arouses all others"
Game Ranking
Bayonetta is ranked #7 out of 1605 total reviewed games. It is currently our top ranked game released in 2010! (107 in total)
6. Mario Kart 8
Wii U
7. Bayonetta