Castle sim gets a new mode, upgradable keeps with the next update

Firefly Studios have provided details of a new patch for Stronghold 3. Patch 1.10 adds some major gameplay tweaks and a new multiplayer Coronation game mode. It will release next Friday on 11 May 2012.

In Coronation Mode players will race to become the King of Kings. Players start off at the lowly rank of “Village Idiot” with limited access to buildings and military units. By generating honour, players can move up the ranks, gaining new technology and weaponry along the way.

For the first time in a Stronghold game Coronation mode also features upgradable keeps, which have their own defenses and provide additional housing for workers and troops. The first King to achieve the rank of “Emperor” will win the game and can rightly claim to be the ultimate Stronghold Lord.

Patch 1.10 also implements a number of fan-requested features and tweaks to the game. Peasants move 66% faster and immigration rates have been increased. All farms produce 25% more food and bread production has been increased by 40%. Pikemen walk faster and Macemen, Armed Peasants and Monks always run by default.

Ranged units, like the Archer and Men at Arms, will gain an attacking bonus based on terrain height. Goods can be manually bought or sold without need for a Market. Instead the Market allows players to set up automatic trading of goods, with controls and settings per goods type.

Stronghold 3 is available for Windows PC. 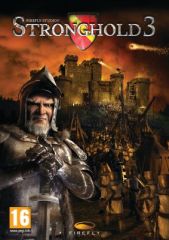 All videos for Stronghold 3 (2)