Remedy Entertainment has announced that Alan Wake’s American Nightmare will include an arcade mode called “Fight till Dawn”.

This arcade mode, players must survive a full night of enemy onslaughts while racking up their score. The arsenal includes old stalwarts like the flare gun to new additions such as the nail gun and the Uzi. Safe havens and unlockable weapons dot the landscape, allowing for a momentary respite from the action. Online leaderboards will be supported in the mode.

The main story mode in Alan Wake’s American Nightmare is part of the ‘Night Springs’ TV show fiction. Alan Wake finds himself stuck in an altered reality filled with dangerous shadows; he must pursue his evil doppelganger, Mr. Scratch, across the Arizona mesa towards the town of Night Springs. Scratch, a supernatural serial killer, has his evil plans set on Wake’s wife, Alice.

Alan Wake’s American Nightmare will be published by Microsoft Studios and will be available for Xbox Live Arcade in mid Q1 2012. 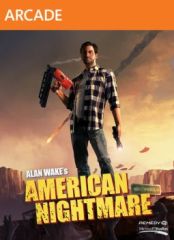