The strategy series reboot gets a new title and launch date

Ubisoft and developer Ubisoft Blue Byte have announced that Settlers: New Allies will be launching on PC on February 17, 2023.

The developers have also decided to change the name, as the title was originally planned to be a remake of the original and simply called The Settlers.

New Allies is a strategy game with an in-depth build-up experience and real-time strategic battles. Choose among three factions: the Elari, the Maru, and the Jorn. Each has a unique look, playstyle, and background story.

New Allies will offer three game modes to players. In the Single player campaign, as the Elari are forced to flee its homeland, they must settle on new and unknown territories. These new Settlers will have to face many challenges on their journey, from the raiding of ruthless bandits to the discovery of the new culture of these lands.

In Hardcore Mode, players will be able to play new scenarios, a wide range of modifiers and conditions will make the AI an even more challenging opponent. Adaptability is key in this new mode that will put the best players to the test, alone or with friends. Lastly, with Skirmish players will be able to experience Solo vs. AI, co-op vs. AI or PvP featuring up to eight players on the 12 maps available at launch.

The game will launch for PC first, but there are also plans for console versions. InnerSpace
Online
There are currently 0 members and 116 guests on the website right now. Who's On?
Activity in the past 10 minutes: 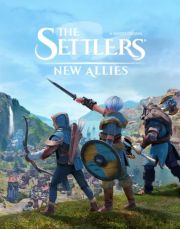 All videos for The Settlers: New Allies (2)