Management game launch pushed back by a few months

SEGA and Two Point Studios Limited have announced that Two Point Campus has been delayed. Originally planned for release on May 17, it will now launch on August 9, 2022.

"Our ambition from the start has been to release Two Point Campus across all PC and console platforms simultaneously to the quality and standard that our community expects from us. This means we will need a little bit more time with Two Point Campus to make sure we deliver the best possible game that can be enjoyed equally on all platforms", said Mark Webley, Game Director at Two Point Studios.

In Two Point Campus, you'll be tasked with building and running your very own campus environment, where the decisions you make will shape the lives of the students you enrol and the staff you hire. For the first time, build in the great outdoors as you develop your very own campus grounds, buildings, and surroundings. Lay down dorms, pathways, hedgerows and more with new creative tools.

The game is set to release on PC, Xbox One, Xbox Series X|S, PS4, PS5, and Nintendo Switch. It will also be included with Xbox Game Pass at release. Two Point Hospital
Online
There are currently 0 members and 73 guests on the website right now. Who's On?
Activity in the past 10 minutes: 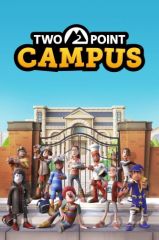 All videos for Two Point Campus (2)