MLB THE SHOW 22
Platform: Xbox One
80
Reviewed on PlayStation 5
SummaryNewsArticlesVideoScreens

Baseball franchise returns, and adds yet another platform

Sony has announced that Shohei Ohtani has been selected for the cover of MLB The Show 22, as the annual baseball game is set to return this year.

For the second year in a row, after Xbox last year, MLB The Show is expanding to a new platform - coming to Nintendo Switch for the first time. On Xbox, the game will once again be included with Xbox Game Pass on launch.

Nintendo fans can now join in with Xbox and PlayStation fans to play against each other online with cross-platform play in MLB The Show 22. In addition, cross progression allows you to earn and use any earned content on any platform or generation (this excludes PS5 and Xbox Series X|S exclusive features like Stadium Creator). With cross saves you can transfer a save file for Road to the Show or Franchise mode to a different console.

As for the gameplay details, there are several Feature Premiere episodes planned, starting in the near future. 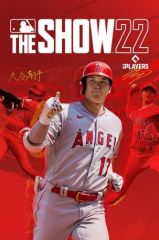