Crusader Kings 3 out for consoles in March

Role-playing strategy game will arrive on new platforms this Spring

Paradox Interactive has announced that the strategy role-playing game Crusader Kings III will be available for consoles on 29 March 2022.

In partnership with the development team at Lab42, Crusader Kings III on console features an adapted interface and control scheme specifically tailored to larger screens and console gamepads. The all-new control map lets players navigate the game’s menus via triggers, bumpers, and quick flicks of the analog stick.

The console edition also utilizes the key capabilities of the consoles, such as fast load times as well as Haptic and Adaptive Trigger controller feedback. PlayStation 5 users will experience the game’s stress mechanics themselves, as their DualSense controllers physically react to in-game events as they unfold. The more stress a character has accrued, the more resistance will be applied to the DualSense controller’s Adaptive Triggers, for instance.

Crusader Kings III will be released on Xbox Series X|S and PlayStation 5. The PC version made its debut in 2020. 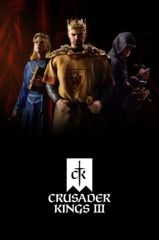 All videos for Crusader Kings 3 (1)