Free PlayStation Plus games for January 2022

Racing and adventure to start the new year

Sony has announced the lineup of free PS Plus games for January 2022.

Subscribers on both PS5 and PS4 can grab a free copy of DIRT 5, with its relentless rallying, suspension-shaking jumps, hairpins and handbrake turns. Travel the world to conquer over 70 routes from locations spanning the entire globe, that turn real landmarks into racetracks – from the frozen East River in New York, to the marble mines of Italy, to the Favelas of Brazil.

PS5 and PS4 owners also get a copy of Deep Rock Galactic, a 1-4 player co-op FPS featuring space Dwarves, 100% destructible environments, procedurally-generated caves, and endless hordes of alien monsters. Work together as a team to dig, explore, and fight your way through a massive cave system filled with hordes of deadly enemies and valuable resources.

On PS4, subscribers also get a third title, Persona 5 Strikers. The game takes players on a road trip with the Phantom Thieves, where they strike back against the corruption overwhelming cities across Japan. A summer vacation with close friends takes a sudden turn as a distorted reality emerges; reveal the truth and redeem the hearts of those imprisoned at the center of the crisis.

These free games will be available to PlayStation Plus members from Tuesday, January 4 until Tuesday, February 1. 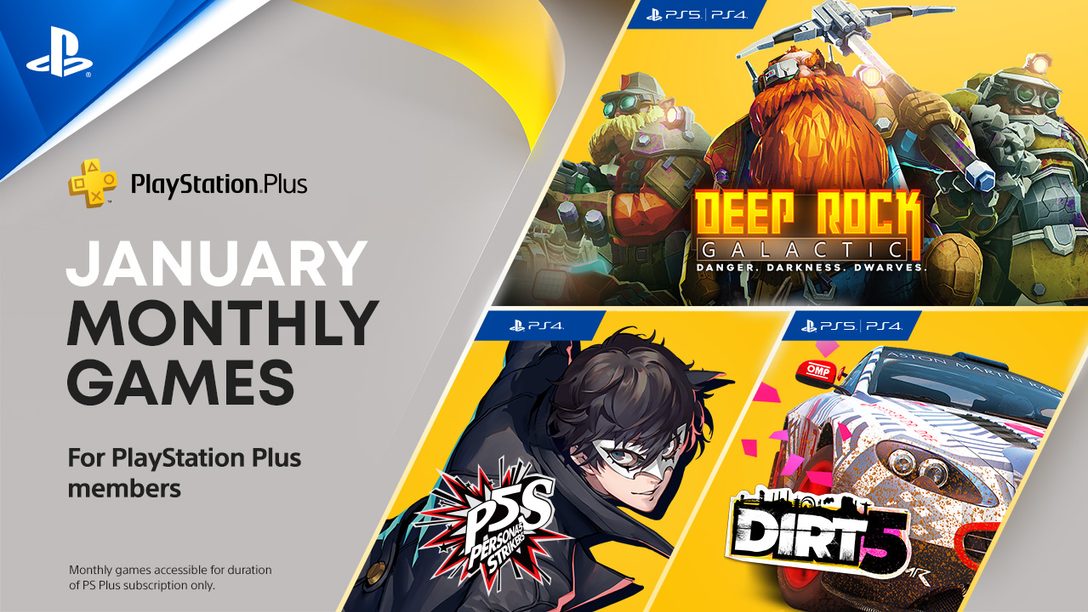 Hogwarts Legacy voice cast announced
Simon Pegg, Lesley Nicol and more are in the game
19 days ago
WWE 2K23 announced
Wrestling game returns with a showcase based on John Cena
12 days ago
Clash: Artifacts of Chaos delayed again
Action game gets pushed back, this time only by a month
12 days ago
Winter Bash DLC released for GRID Legends
Final expansion for racing game is out now
9 days ago