Company says it's in early stages of the project

Ubisoft has announced the development of a Splinter Cell remake.

Led by Ubisoft Toronto, the game will be rebuilt using Ubisoft’s own Snowdrop engine – the same engine being used to develop Avatar: Frontiers of Pandora, as well as Ubisoft’s upcoming Star Wars game.

The company is currently looking for new hires to join and help with the project, so it is in early stages, with no platforms or release window.

The original Tom Clancy's Splinter Cell was launched in November 2002 and went on to span multiple games. The most recent release being Splinter Cell: Blacklist in 2013. 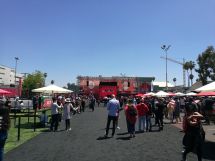 Embracer Group to acquire multiple Square Enix studios
Multiple developers and their franchises are moving, including Tomb Raider and Deus Ex
26 days ago
2022 Xbox & Bethesda Games Showcase announced
The annual event returns in June for a digital broadcast
30 days ago
PS5 update adds Variable Refresh Rate
VRR support being added this week to variety of games on PS5
30 days ago
More PlayStation Plus free games confirmed
A variety of games across the new subscription tiers will be offered
12 days ago