The Good Life releases next month

Following a few days and switch in publisher, developers White Owls and Grounding have announced that The Good Life will be released on October 15.

Naomi Hayward finds herself far from her New York home. Out of her depth and drowning in debt, she is commissioned by The Morning Bell newspaper to uncover the mystery behind Rainy Woods—a rural English town considered to be the ‘happiest in the world.’ With her camera at the ready she starts her investigation but soon finds that the town—and its wonderfully quirky residents—are hiding many secrets. Not least, why they transform into cats and dogs at night. Caught up in the town’s enchantment—Naomi must use her new found animal skills to uncover the truth about Rainy Woods.

The Good Life will be out for PlayStation 4, Xbox One, Switch, and PC. The Walking Dead: Michonne
Online
There are currently 0 members and 80 guests on the website right now. Who's On?
Activity in the past 10 minutes: 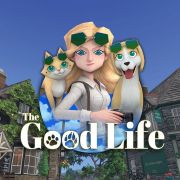 All videos for The Good Life (2)