Microsoft has announced that Minecraft Dungeons is out today across Xbox One, Windows PC, Nintendo Switch and PlayStation 4.

Minecraft Dungeons was developed at Mojang Studios, and promises challenges and adventure for players of all skill sets and playing types in this action RPG. The Standard Edition is $19.99 USD and the Hero Edition is $29.99 USD - which includes a Hero Cape, two player skins and a chicken pet, as well as two future DLC packs, when they become available.

The first two DLC packs included in the Hero Edition are already in production – adding more adventures and challenges in brand new settings. The first DLC expansion of the game, called ‘Jungle Awakens’, will see players trek through new missions to the heart of the jungle where you’ll find new weapons, armor and artifacts.

Minecraft Dungeons is available the same day it launches worldwide with Xbox Game Pass memberships on both console and PC. 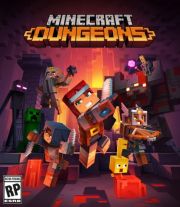 All videos for Minecraft Dungeons (2)