Konami has announced that its eagerly-awaited PES 2011 title will deliver its new style of free-flowing and totally open football on October 8th (UK) and October 19th (NA), with the publisher also outlining some of its new officially licensed teams.

Following extensive consultation with the series fans and football fans all over the globe, PES 2011 ignites the series with a stunning collection of gameplay additions, control options and new aesthetics. Every aspect of the game has been honed and polished, with total freedom of play acting as the core ideal in the new game. To this end, PES 2011 introduces a power gauge for each player that allows the user to exactly place every pass, cross and shot. Balls can be placed anywhere with utter precision, while all new AI routines hand complete control over to the player.

PES 2011 also boasts over a 1000 new animations, with little touches such as players limbering up, married to subtle movements both on and off the ball that reflect the pace and power of a top-level match. Likewise, the new game also boasts a stream of new surprises and additions, ranging from smaller touches such as a new throw-in system that utilises the power gauge system, and simplified tactical selection, through to huge advances such as Master League Online, a radically overhauled Become A Legend service, and the addition of the Copa Libertadores – South America’s most illustrious competition.

KONAMI has also worked to add a number of new European licences to the game with Bayern Munich amongst those joining the rosters. The German club joins a long list of officially-sanctioned sides that include Barcelona, Real Madrid, Juventus and Inter Milan – all of whom will be included in the game’s bolstered UEFA Champions League and UEFA Europa League modes. The winners of these competitions will also be able to play in the UEFA Super Cup Final, now fully integrated into the Master League and Become a Legend modes. PES 2011 also features a full range of officially-licensed national sides, including Germany,alongside the likes of Portugal, the Netherlands, England, and Italy.

“We have been working on this, the ultimate evolution of PES to date, for a long time,so it is great to finally let people know when they can get their hands on it,” commented Jon Murphy, European PES Team Leader for Konami Digital Entertainment GmbH. “I think pretty much everyone knows that we have incorporated truly open gameplay in PES 2011, but it really has to be experienced for it to be appreciated. The Tokyo team has worked incredibly hard to create a game that is true to the series’ history, but takes it in new, exciting areas. Come October 8th, I hope that people will be lost in the game’s huge array of options and dazzled by its utterly compelling gameplay.”

PES 2011 will be released for PlayStation 3, Xbox 360 and PC-DVD on October 8th in the UK and October 19th in North America. 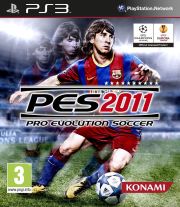