SEGA and Ryu Ga Gotoku Studio have announced that the latest entry in the Yakuza series, Yakuza: Like a Dragon (Japanese title - Ryu Ga Gotoku 7) is releasing in Japan on January 16, 2020, with a Western launch planned for 2020.

Yakuza: Like a Dragon introduces a new main protagonist for the first time since the series' inception over a decade ago - Ichiban Kasuga, a low-level yakuza member looking to prove his self-worth, and follows him and his motley crew of unlikely allies as they attempt to rise from rags to riches.

With the bulk of the game taking place in the large-scale setting of Ijincho in Yokohama, players will explore an entirely new side of Japan never-before-seen in the series. Not only that, but the combat system has undergone a major overhaul, combining Yakuza's established brawling action with a turn-based RPG battle system.

Yakuza: Like a Dragon will be released exclusively on PS4. 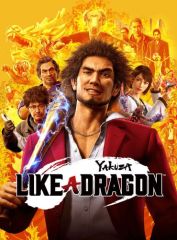