A direct sequel to Yakuza 4, Yakuza 5 continues the story of Kazuma Kiryu alongside four other protagonists, following their struggles and conflicts in the seedy underbelly of Japan’s Yakuza underworld. Featuring a new graphics engine, Yakuza 5 takes players to five major Japanese cities to venture through a life of crime and power. 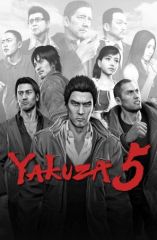