The sport simulation title will return this year

FM20 promises players the chance to call the shots at their favourite club as they take control of their team's destiny and make all the decisions that a real manager does as they develop their team and attempt to deliver a sustained level of success. More information is promised in September.

Fans who pre-purchase Football Manager 2020 (for PC and Mac) will receive a 10% discount. Additionally, those who pre-purchase will be able to get their managerial careers underway early through a Beta version, which will be available roughly two weeks prior to the official street date. DiRT 2
Online
There are currently 0 members and 120 guests on the website right now. Who's On?
Activity in the past 10 minutes: 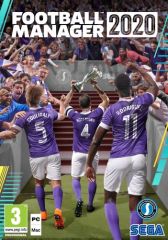