Grow Up coming this summer

A new open world sequel to Grow Home is in development

Where the original saw a little robot named BUD (short for Botanical Utility Droid) growing an immense, beanstalk-like Star Plant, Grow Up tasks him with acrobatically bounding around a lush, fully open world, searching for the scattered pieces of his spacecraft, MOM.

BUD returns with new abilities that include his Floradex, which enables him to clone any of Grow Up’s 24 distinct plant species, and use their capabilities to bounce, catapult, and soar through the landscape and discover its secrets. With the help of a new flying friend, POD, he can tackle the game’s missions or take time exploring and reshaping its world. Eventually, he’ll need to find a way to grow the planet’s gigantic Star Plants, climb into space, and reach the distant moon for a reunion with the final piece of MOM.

Grow Up is coming soon, and will be available for download on PlayStation 4, Xbox One, and PC this August. 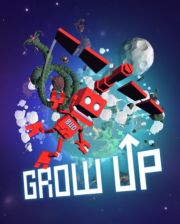