The centuries-old goblin assassin Styx returns in a new stealth game, with a bigger budget, bigger ideas, and a new engine: Unreal 4.

Following the fall of Akenash tower, an extraordinary matter has forced Styx out of hiding to infiltrate Körangar, the city of the Dark Elves. Supposedly impregnable, a diplomatic summit offers Styx a chance at slipping in unnoticed, as he learns that the event is nothing but a mere façade. Moreover, the Elves have joined forces with the Dwarves, and the only thing both races have in common is a mutual hatred of the Goblins.

The sequel will feature new mechanics aimed at refining the abilities and movement of Styx; grappling around corners, climbing ropes, and using his knife as a zip-wire. Shards of Darkness aims to offer freedom of movement, along with refined stealth and assassination mechanics, expanding and improving on the strengths of Styx: Master of Shadows.

Styx: Shards of Darkness will be released for PS4, Xbox One, and PC next year. 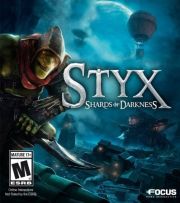 All videos for Styx: Shards of Darkness (7)