Also known as: FEAR 3
Alma returns in F.E.A.R. 3 but this time her sons Point Man and Paxton Fettel introduce divergent co-op, giving players distinctly different abilities affecting their own play as well as the experience of their co-op partner. Gamers participate in single player or co-op modes as Point Man, a genetically enhanced super soldier originally introduced in F.E.A.R., or they can play cooperatively as his conniving brother Paxton Fettel, whose incredible telekinetic power has given him life beyond the grave. 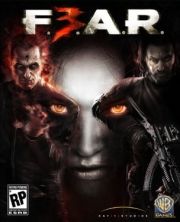