Fox, Falco, Peppy and Slippy are back in a new adventure with Star Fox Zero. Players pilot an Arwing in the traditional style of TV game play and, in a new twist, players can use the cockpit view on the GamePad to aim and shoot enemies using the gyro controls. Having two unique viewpoints offers distinct gaming advantages and frees up the TV for more cinematic moments in the title's new all-range mode. 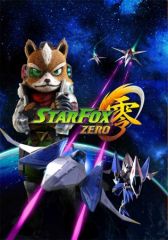