Kinect Nat Geo TV blends world-renowned Nat Geo WILD TV show episodes with intuitive Kinect for Xbox 360 technology, transporting kids and their families around the world to expand their knowledge while inspiring a sense of wonder and excitement. Through the magic of Kinect interactivity, do more than just watch episodes — engage, play and learn as Kinect Nat Geo TV turns your living room into an animal habitat and you into a variety of animals, such as a bear, without ever leaving your living room. 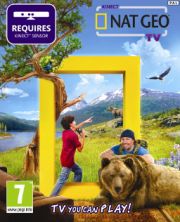