Also known as: SF IV
Street Fighter IV brings the legendary fighting series back to its roots by taking the beloved fighting moves and techniques of the original Street Fighter II, and infusing them with Capcom's latest advancements in next generation technology. The result is a truly extraordinary experience destined to reintroduce players, both familiar with the Street Fighter series and those coming to the game for the first time, to the time-honored art of virtual martial arts. 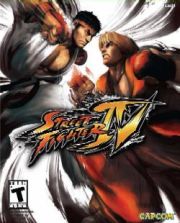