Everybody knows that the indie gaming scene has its own unique collection of strengths and weaknesses. Without the mountains of funding to back them up, indie games usually need to tone back their scale and raw amount of content. On the flip side, without a strict hierarchy of corporate direction to follow, indie games can feel free to explore the most creative and thematic experiments that gaming can allow. Avadon 2, the most recent RPG experience from Spiderweb Software, is the rare bird that cracks this pattern. For such a small studio and such a small price tag, the sheer amount of content in the epic saga is truly surprising. 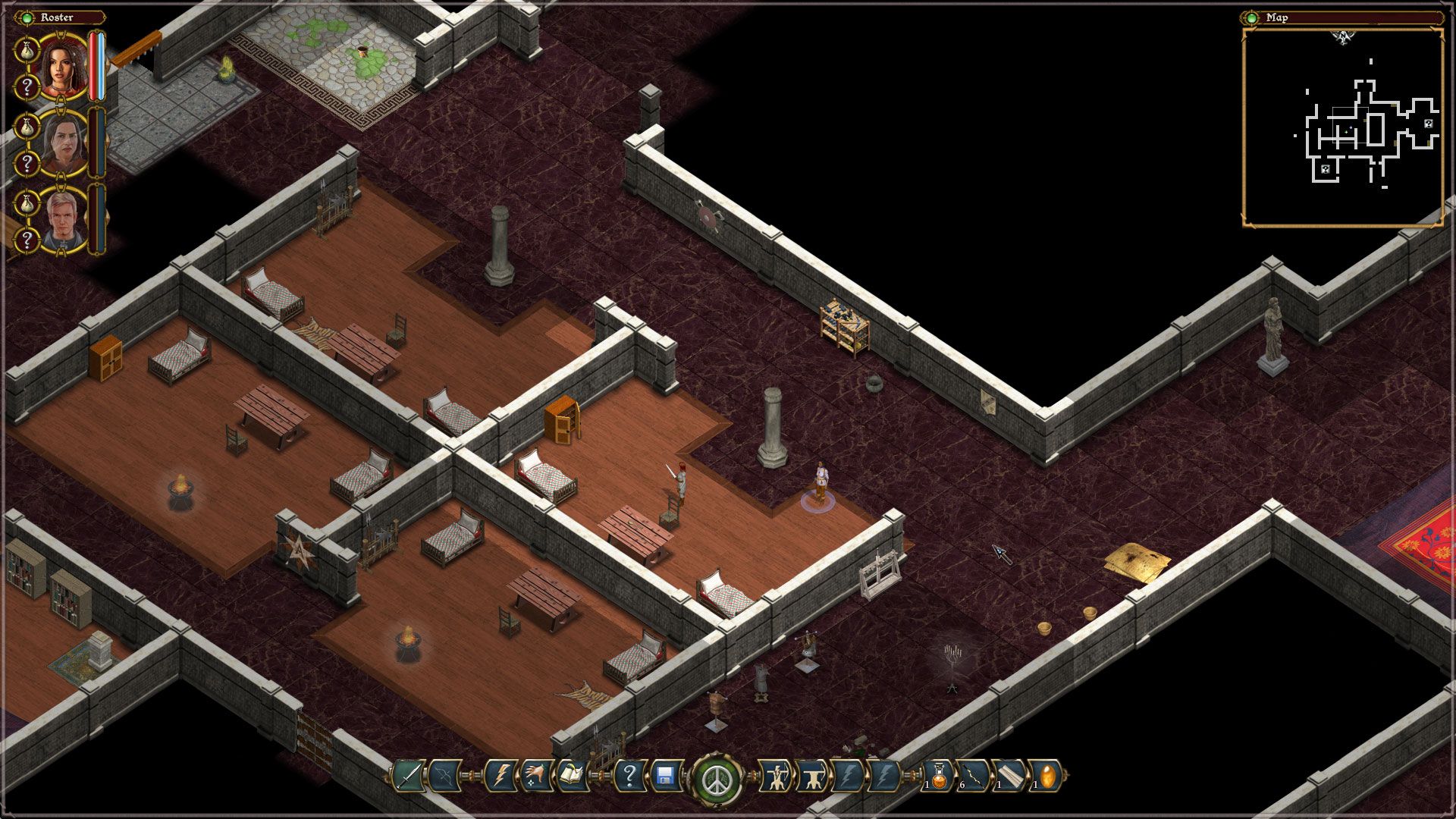 It turns out that in Avadon, your proud service to your country isn’t quite voluntary

In Avadon 2, you play as an agent of the tyrannical Avadon Fortress, a powerful consolidation of power devoted to keeping the surrounding nations unified. Although the game is technically the second part of a planned trilogy, the storyline is wisely kept completely independent, and new gamers can jump in without any need for playing the first entry. Gameplay is designed around a central hub area that serves as your jumping-off point for quests. It’s a smart move as far as design goes, for several reasons, best of all in that it deliberately encourages you to experiment with every class combination. Every time you leave Avadon’s central fortress to go a questin’ you select two of your five companions to join you for the task, while the others stay inside and ‘train’. The best part about this is that you don’t need to worry at all about balancing the XP gain: party members who stay at home will automatically gain experience at roughly the average rate that your active party does. The effect is that Avadon 2 is truly free as far as class experimentation goes; your choice of which characters to use is based strictly on the desire to explore new tactics, and possibly out of the knowledge of which classes will work best for a particular mission.

Avadon 2 still carries some traces that mark it as coming from an earlier tradition of games. In an age where most games are over-saturated with blinking reminder texts and flashing arrows, Avadon’s simple tutorials might still leave some confused about how combat works, especially new players. As with most Spiderweb titles, there’s also a hefty dose of content recycling. A player might not mind having half of the enemies be repeats from earlier games, but the soundscape in particular feels like it hasn’t changed from Avernum series. Animal bites and sword clashes quickly grow stale with repetition, and with the only music being on the game’s title screen, the world can sometimes feel a little lifeless. It can often seem as though one is simply playing an older Spiderweb RPG with a light reskinning. 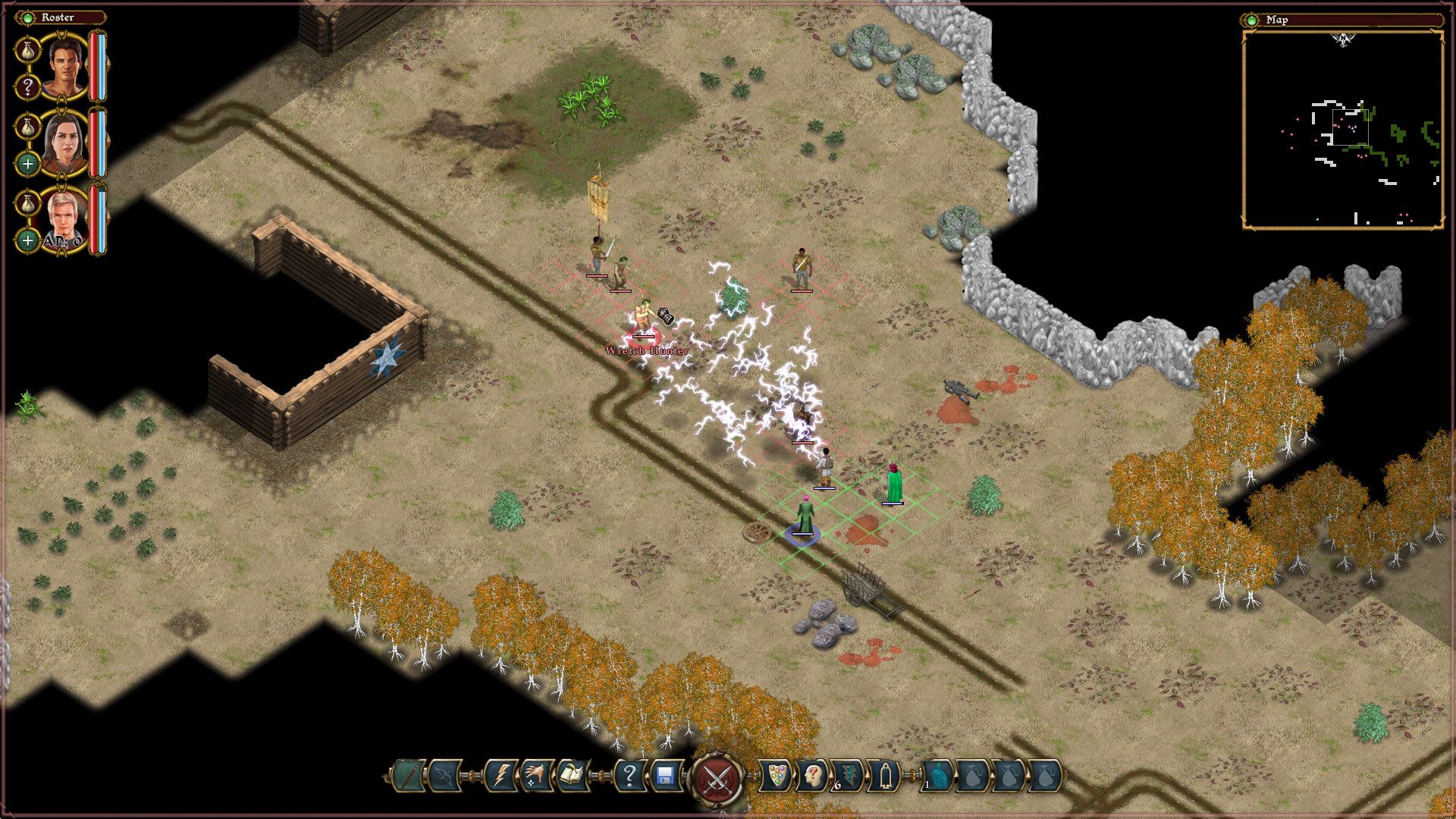 A zoomed-out view let’s you see the whole battlefield, but sometimes things get cluttered

But while some of these older traits may be annoying, the game also shows off some nice upgrades, especially in its RPG mechanics. Take the skill trees, for example. There are the usual dependencies of course, but each skill tree is built around three different directions of character development, and not only are they interlaced in a way to encourage careful planning (selecting one particular option in one column might give you a better boost in another), but there are also “specializations” that let you add extra levels to an entire column of skills. It has the odd effect of simultaneously encouraging min-maxing and balanced development, and it honestly had me scratching my head and musing over the best way to level up my character. This kind of planning is, of course, the greatest joy that an RPG can provide. Throw in loot-based enchantments for weapons and armor, along with the ability to buy “skarabs” which can grant your individual characters special abilities, and the result is that Avadon 2 shows off some solid RPG depth unusual for a game of its size.

Compared to earlier works from Spiderweb, nearly everything in Avadon 2 shows off some polish. The artwork is a little more cohesive, the combat flows more smoothly, and your options in playstyle and character development are more distinguished. Even the writing shows improvement, building a plotline around recurring villains which you fight several times, and giving your party members distinct character traits and personalities. That said, at times it still feels very stilted, especially compared to some more character-focused RPGs that are currently on the market. When the story and character are built strictly through the slightly cramped text-displays of dialogue trees, it very much limits how invested the player can become in storyline. 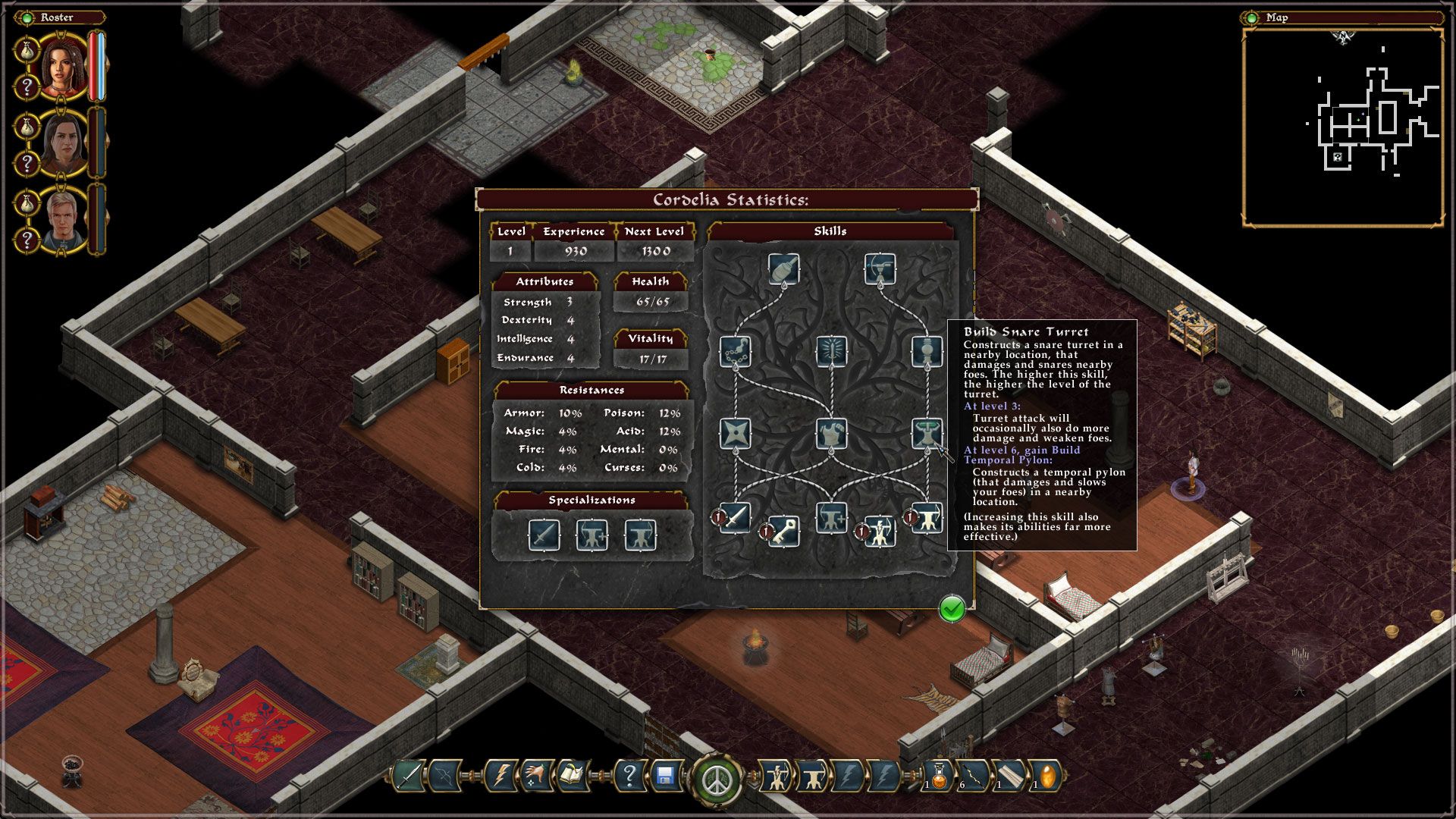 If you want to specialize, you’ll need to have a solid foundation of basic skills

The design flaws in Avadon 2 are subtle, but still pop up from time to time. One that only a few people will run into is the dreaded “mana trap”. In Avadon 2, characters use Vitality to fuel their special abilities, and their vitality bars can be refuelled by visiting Avadon itself, or via some handy potions. This in and of itself is nothing new: we’ve been balancing mana-economics since the very first days of pencil-and-paper RPGs. However, the slow rate of drain and the absolute lockdown on sources of Vitality mean that if the player isn’t prepared, they might accidentally take a mission which drains their Vitality and leaves them high and dry; without Vitality, even on the easiest difficulty setting, your characters are useless. But since you don’t know how long a quest will take before you go on it, should you find yourself completely de-energized, you’ll have to dump all your progress on the quest so far and start over, even if you were doing well. Without a good save file to draw from, you can lose hours of gameplay this way.

And of course, Avadon still bears some odd combat tricks involving the combat zone. Since combat begins and ends based on whether enemies can currently see you, you can always duck out of combat by walking out of an enemy’s line of sight. Ending combat automatically revives your fallen comrades, so usually when one character falls, it’s becomes necessary to throw another character into the enemy horde as a distraction, while your fastest character runs around the corner, catches their breath, and then lets you start over. It’s not a particularly game-breaking concept, but it’s a good example of older mechanics in Avadon that feel like they’d benefit from a modern redesign. 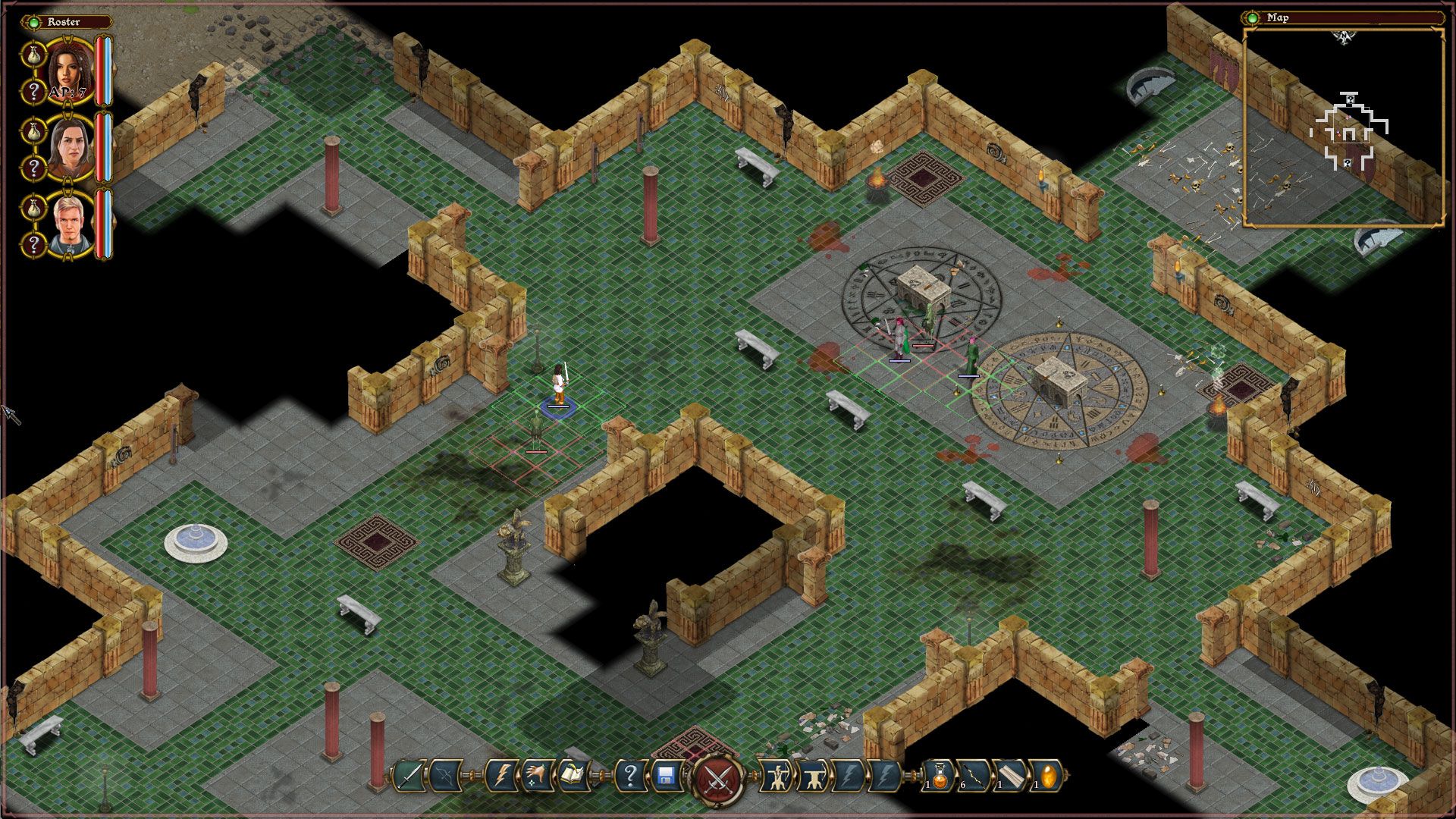 Hmmm… blood soaked altars and pentagrams. I’m not interrupting a demonic ritual, am I?

How much a player likes Avadon 2 will depend strongly on whether they’ve played earlier games from Spiderweb. Veterans will be pleasantly surprised to find some modern RPG elements nicely mixed in to the traditional turn-based system, and a few rough areas of the franchise given a solid polish and updating. Newcomers might be turned away by some older design quirks. Whichever camp you fall into, Avadon 2’s chief strength will be that, especially for such a low price, the amount of content and size of the world to explore is astounding. For those who enjoy the style, these hours will be well spent.

Our ratings for Avadon 2: The Corruption on PC out of 100 (Ratings FAQ)
Presentation
72
The sheer size of the world and amount of loot to find are staggering for such a cheap title. Music and sound haven’t kept up with the rest of the game, however.
Gameplay
70
Clever skill trees and object enchantment add a lovely layer of RPG goodness to the game, but the ‘mana trap’ and an overuse of older content might deter some.
Single Player
78
The basic story in Avadon 2 is decently strong, and the player is given some interesting choices to make along the way that can result in different endings.
Multiplayer
NR
None
Performance
75
Avadon 2 doesn’t allow for alternate keyboard layouts and might block your PC app-switching commands, but otherwise runs smoothly and without a hitch.
Overall
72
Avadon 2 represents a mix of classic Spiderweb design elements with new updates. Considering the price, it represents an enormous amount of content for a small investment, but those preferring quality over quantity might want to look elsewhere. 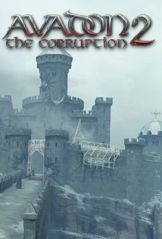