TMNT: OUT OF THE SHADOWS
Platform: Xbox 360
51
SummaryNewsArticlesVideoScreens

TMNT: Out of the Shadows Review

Since the original Turtles in Time on the Super Nintendo, the Teenage Mutant Ninja Turtles have had a difficult time making their mark on the video game industry. The subsequent entries have ranged from playable to downright laughable. In an attempt to revive the Turtles in a way that pleases longtime fans while staying true to Nickelodeon’s incredibly popular animated series, Red Fly Studio has developed Teenage Mutant Ninja Turtles: Out of the Shadows; the final game in Xbox Live’s Summer of Arcade. However, is this new title worthy of the historic phrase, “cowabunga”? Sadly, it is not. 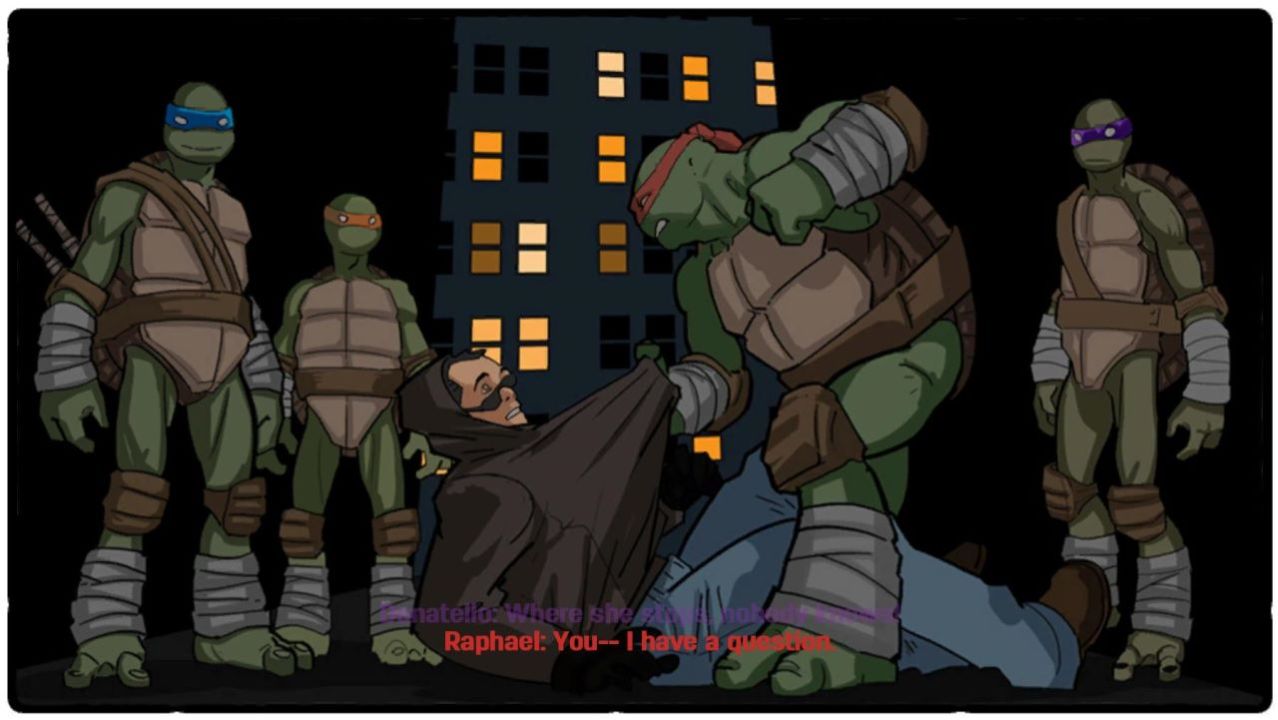 Out of the Shadows, to put it simply, is a beat ‘em up. You will enter an area, face waves of enemies and then continue to the next area; rinse and repeat. The campaign can be conquered solo, in cooperative splitscreen or with a team of four online players, yet it will not take long to do so. Containing only four levels, the campaign can be completed in a mere three to five hours. Unless you are increasing the replay value by playing online, this short length can cause the solo adventure to become stale. Fortunately, Red Fly Studio has also incorporated a variety of other game modes to partake in. With several challenge levels, an unlockable survival mode and a training dojo, there is more than enough to sink your ninja skills into. The only downside to these is the lack of online play which is both confusing and upsetting, especially with a title promoting online multiplayer. Nevertheless, the best alternative mode is Donatello’s Arcade Cabinet. This local four-player mode reinvigorates the classic beat ‘em up seen in the previous Teenage Mutant Ninja Turtles arcade titles.

Even with the amount of content packed into this arcade title, none of it will matter if the content fails to excite. Thankfully, that is not the case. The combat in Out of the Shadows can be extremely addictive as long as one puts the time into learning the fundamentals. The system is, for the most part, similar to the Batman: Arkham franchise. Where it stands apart are the separate attack buttons - one for the Turtle’s weapon attack and the other for a kick attack - and the much more methodical pace needed to pull off combos. Though inferior to Batman’s smooth mechanics, the ninja skill is strong with this one. At first, the techniques each Turtle has seem basic and repetitive, but this is only until players gain enough experience to level up each of the brothers. With these experience points more skills and combos can be purchased that actually open an impressive amount of options for future brawls. With enough skills unlocked, players can utilize their sub-weapons, devastating team attacks and instant knock-outs to overcome some of the more difficult battles. 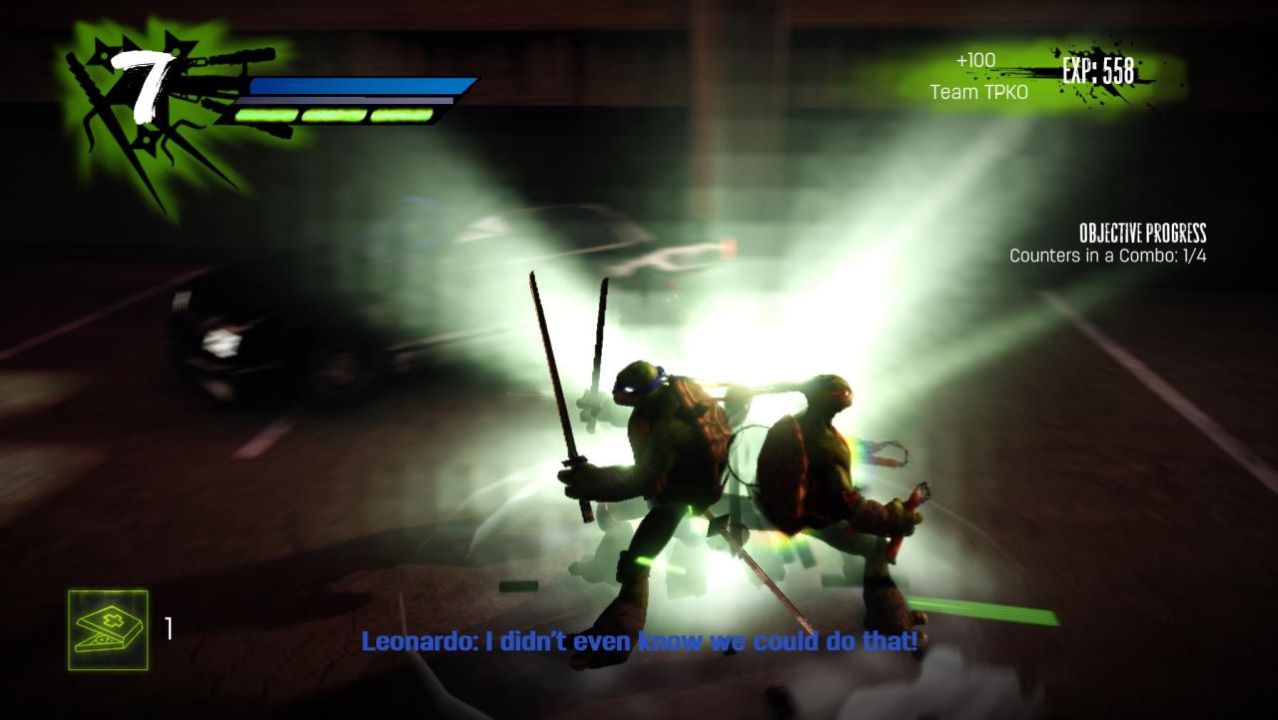 Unfortunately, no level or skill will help players overcome the most difficult battle of all: the glitches. During gameplay, the Turtles will get stuck in walls, clip through environments and be unable to perform vital functions such as reviving a fallen teammate. It doesn’t fare much better in the menus as sometimes the exit button fails and players may become part of the “Connecting” screen prison when attempting to join an online lobby. If this game had testers, you wouldn’t know it. Disregarding the aforementioned glitches, and some infrequent framerate issues when all four Turtles are battling a wave of enemies on the same screen, the game will run smoothly when everything is working. The problem is that Out of the Shadows should be working all the time, and not when it feels like it.

Over the course of their brief adventure, the four brothers will have to take on groups of Purple Dragons, Mousers, and the Foot Clan to save April and find out what the infamous Shredder is really up to. While rescuing a kidnapped April O’Neil isn’t the most original tale the franchise has thrown at audiences, it suffices to get the Renaissance-named Turtles out of the sewers and into what feels like another episode of the your favorite TMNT series. Since the game is based heavily off of the Nickelodeon series, quite a few recognizable guests will make appearances. Although the cameos are a neat touch, the disappointing feature is that the cutscenes consist of lifeless, comic book slideshows. It is understandable that Red Fly Studio probably wanted to reference the comic book origins of the franchise, but the problem is that they are poorly drawn and often recycle the same images. It’s almost as if they were running out of time and decided to use concept art for the cutscenes. 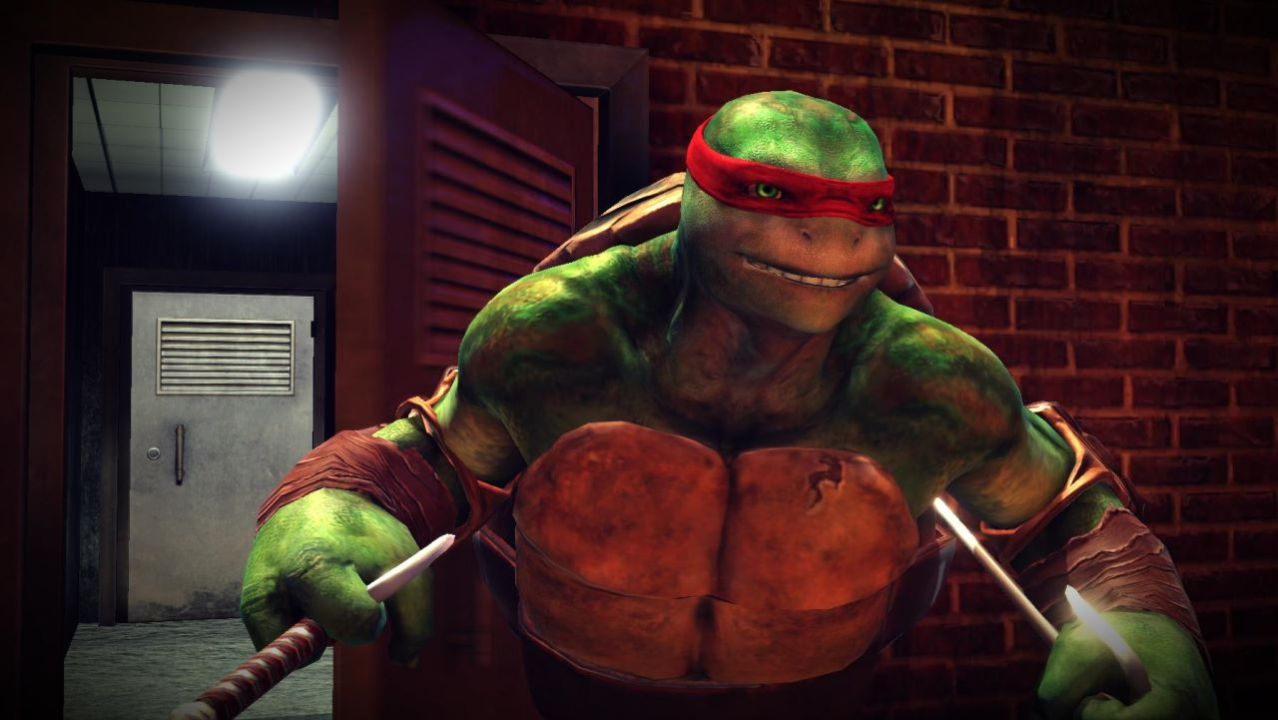 The actual look of the game is much easier to take in than the cutscenes. Each of the Turtles is carefully designed with unique characteristics, such as Raphael’s cracked shell, separating their personalities. Some may not like their design—most notably, the nostrils—but the Turtles, like the 2013 animated series, are mutated with a strain of human DNA which explains some of Red Fly’s choices. This same care went into the development of the supporting cast as characters resemble their television counterpart, but with a touch of the studio’s own preferences. Due to their variety, there are some environments that are also noteworthy, but bland textures do not take much to acknowledge despite the levels being shrouded in the darkness of the night.

What does not represent any of the better Teenage Mutant Ninja Turtles media is the voice acting. At times, it is almost intolerable hearing Michelangelo try to annunciate what could have been a comedic line. What takes the fault for this is the story’s dialogue. While hearing the brothers speak nonchalantly during travels, the conversations are enjoyable and can have you reminiscing of the old days. However, when the game focuses on the story, some lines do not even make sense. For example: “We found April’s cellphone!” is met with “Oh, you wonderful boot!”

Teenage Mutant Ninja Turtles: Out of the Shadows is one of those games that fills you with a variety of emotions. On one hand, battling enemies with an extensive combat system is pleasant. On the other, the amount of bugs found in the game can turn off some of the most dedicated players. The online multiplayer increases replay value, but the feature is restricted to a four hour campaign. For almost every positive, there is some sort of negative; and while the positives do outweigh them, the experience can sometimes be dragged down significantly. Somewhere in here there’s a decent game, but you’ll only find it if you are dedicated enough to trudge through its sewers.

Our ratings for TMNT: Out of the Shadows on Xbox 360 out of 100 (Ratings FAQ)
Presentation
55
The Turtles' design may not please everyone, but the overall look of the game will please both old and new fans even if it lacks some polish.
Gameplay
63
After overcoming the brief learning curve, the vast amount of combat options become apparent resulting in an addicting fighting system utilized in a variety of game modes.
Single Player
50
Although it is too short and too predictable to be memorable, the campaign resembles a Saturday morning cartoon episode with cameos from your favorite cast members... in the form of an ugly comic book slideshow.
Multiplayer
56
Playing cooperatively with a full team can extend gameplay, but it’s bewildering why only the main campaign offers this feature.
Performance
34
While there are some occasional drops in framerate, the major concern is the numerous glitches halting both gameplay and enjoyment.
Overall
51
Teenage Mutant Ninja Turtles: Out of the Shadows will not have fans yelling "cowabunga" any time soon; but those willing to look past its rough, and sometimes jagged, edges can find a good amount of content supported by gratifying combat.

TMNT: Out of the Shadows 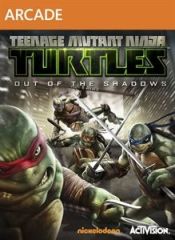 All videos for TMNT: Out of the Shadows (1)
Advertisement ▼