Rayman Legends returns with all of the joy Origins inspired, along with a few new tricks to make it even better.

In 2011, the long dormant Rayman series received a reboot with the much beloved Rayman Origins. A tribute to the classic platformer, Rayman Origins garnered much of its love by being able to rekindle the feeling of playing video games with a friend on a Saturday morning after watching cartoons and eating sugary cereal. Suffice it to say that Rayman Legends had big shoes to fill coming in as the sequel to the much beloved Origins. Luckily, Legends is more than up to the task and creates an experience that is as equally wonderful, if not more so, than its predecessor. 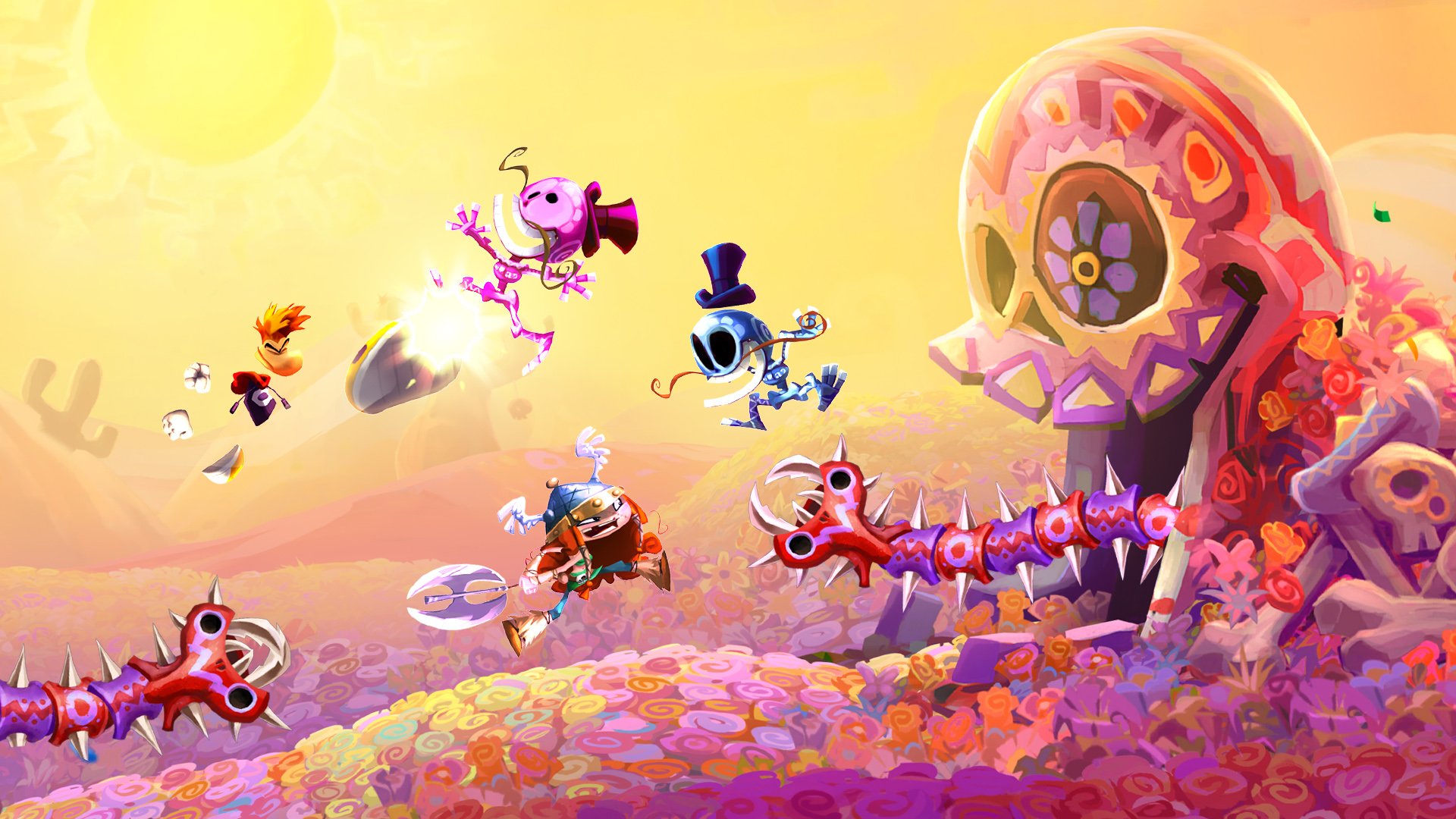 Rayman Legends is quite similar to Origins. Players take control of Rayman or one of his numerous friends, then hop, glide, fight, dodge, and swim their way through hundreds of the levels filled with traps and enemies. At first glance, it feels like Legends nerfed itself, lowering the difficulty to make the game easier for a wider audience, but after spending some time with the game that notion was quickly dismissed as Rayman still boasts the same old-school challenge as its previous entry.

In order to truly embrace a video game challenge, players are in need of tight controls, luckily Rayman feels as finely tuned as ever. Buttons are responsive, movements are exact, so the game is able to require millisecond reactions because it can accommodate them. There’s the occasional hiccup--jumping off of zip lines can be annoying, especially if you’re playing with multiple people--but it is rare that you feel Legend’s design has cost you any lives. In addition to all of Rayman’s staple moves, such as sprinting, flying, swimming, and punching, Legends requires you to use a button to control the flying cohort Murfy. Murfy assists the player through multiple levels by cutting ropes and moving blocks, creating a definitive difference between Origins and Legends. In the Wii U version of the game, Murfy can be controlled by the touchscreen on the gamepad, in the Xbox 360 and PlayStation 3 version he is controlled with the press of a button. This creates a unique experience on the Wii U and makes the Nintendo platform the best experience for Legends, but if you are stuck without a Nintendo, the game is still plenty of fun without the gamepad peripheral. 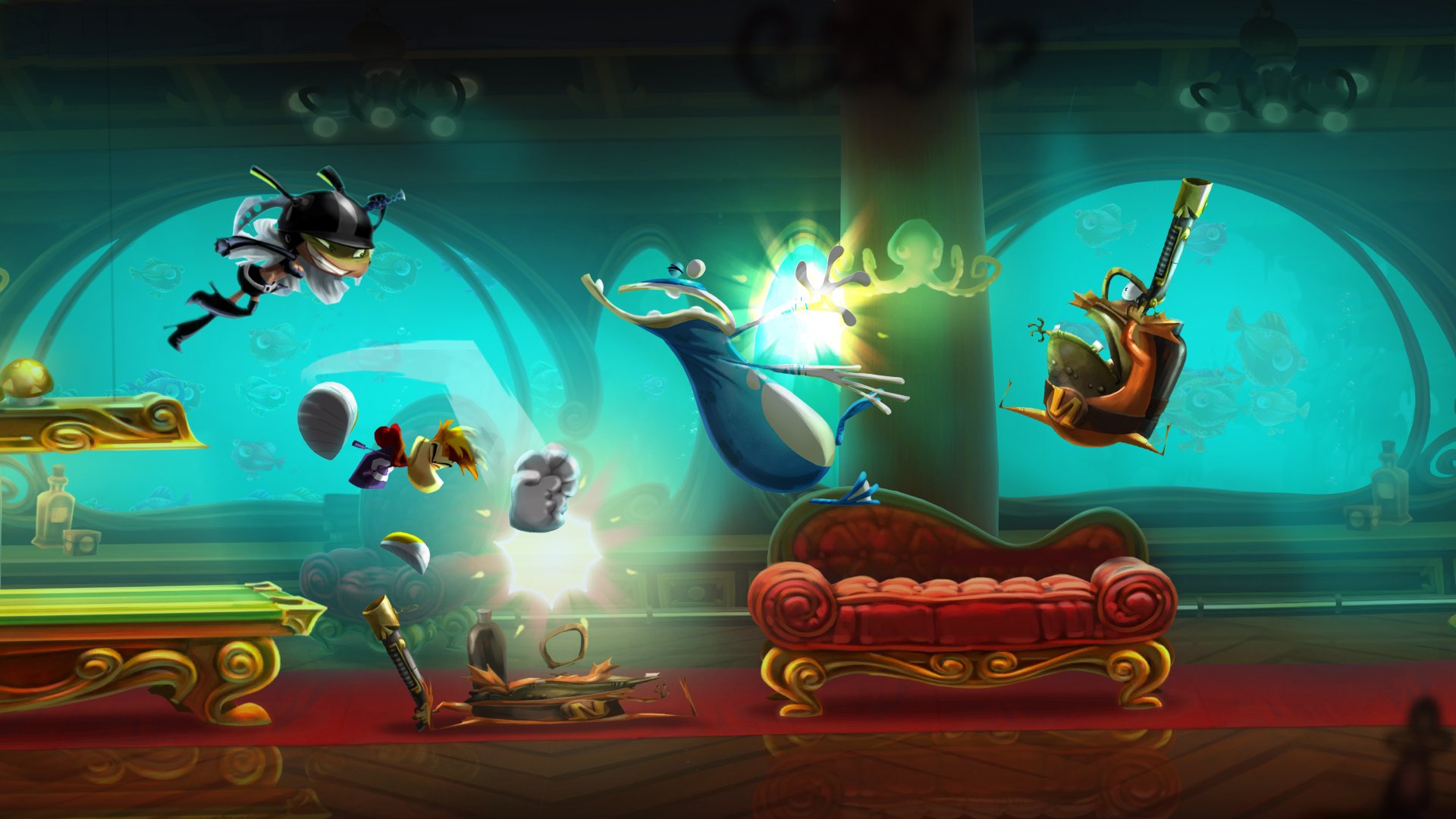 Running about the world of Rayman Legends is even more visually stunning than time spent with Origins. The series has oft been praised for its beautiful, animated art-style and Legends shows it off like no other. From dilapidated castles to the inside of a cake, each level of Legends looks gorgeous and feels unique. The strange, offbeat sense of humor the series wears with such pride is clear and alive in the game as players will run through rotten apples, hop over enemies cleaning their masters marble floors, and run from a giant green monster who can only say his own name while he chases you. Rayman has never tried to beat its audience over the head with its humor, instead it is trickled into the game in small doses, keeping the experience light and charming, even when faced with the game’s difficulty.

For as beautiful as the levels are, it hardly compares to their ingenious design. Secrets are littered throughout the game, in places that you will miss until you wonder how to never saw them. There’s a finely tuned pace, established between breathless time trial levels and the larger, sprawling ones. Legends has six worlds (including one bonus world) that each consist of the same formula: a couple of regular levels divided by some timed levels where something chases you, then capped off with a boss fight. Much like Origins, you can see the seams in the design, however Legends plays with the theme of their levels better than Origins ever did. It’s hard to say what is the definitive lava world and what is the ice world. This creativity allows Legends to feel surprising and new with each level you beat. I would be remiss to not point out the best part of each world is the musical stage with which they conclude. These music levels sync up jumps and punches with different songs, all of which are brilliant covers that move the player along at light speed, making these levels feel rewarding as well as creative. 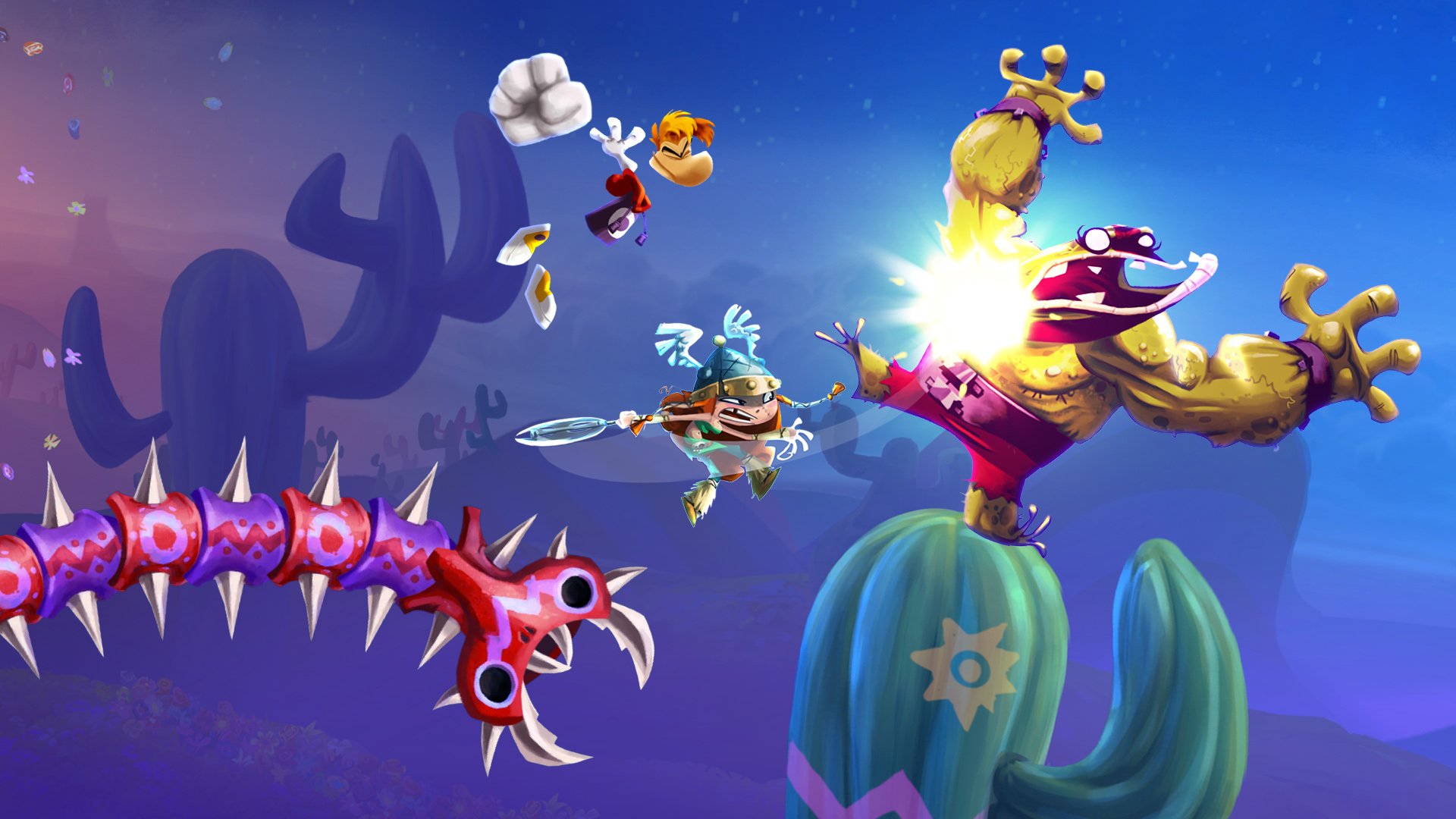 While the music levels are where the aural qualities of Rayman Legends are at their best (featuring such musical treats as a kazoo version of Eye of the Tiger and an under-the-sea cover of Whoo-Hoo) the entire score of Rayman Legends is a treat. Rayman Origins had charming music, sure, but Legends features sweeping pieces that feel appropriate when accompanied with the epic background artwork of the game. The music is still fun, it is still exciting, but it is also more complex and robust than before.

After you have experimented with Legends on your own, you will probably want to have some friends join in. Rayman Legends is plenty of fun on its own, but it is even better when you are playing with someone else. Having a second player can help tone down the difficulty as you can revive fallen friends, helping you get through some of the more tricky parts. There are some drawbacks as it can be difficult to follow your character amidst a sea of the strange Rayman protagonists, this is worse when certain levels leave your characters in shadow and can make them nearly indistinguishable. There is also friendly fire that can accidentally knock an ally to their doom. It’s fine when playing some of the slower levels, but additional players makes the time trials almost painful, as if they were meant to be played by only one person. Those annoying aspects of the multiplayer are easily assuaged when you are sharing some of the better moments of Legends. Playing the music levels with someone to help you keep going, or yelling back and forth while entrenched in a boss battle really shows off the fun in Legends and connects you to your inner-child. 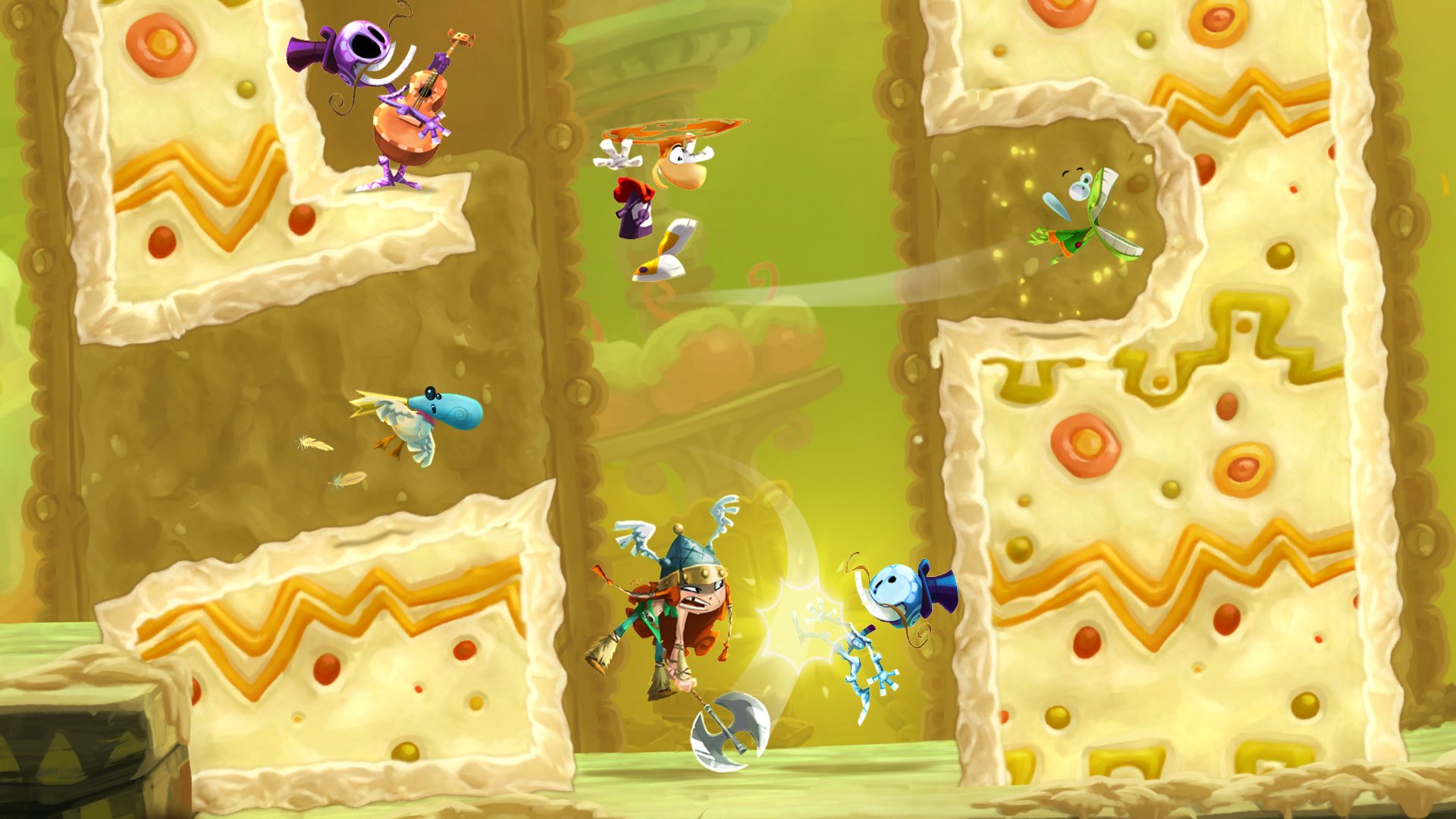 Rayman has literally hundreds of levels, spanning the six aforementioned worlds and even some throwbacks to Origins. Even after you have beaten all of these levels, there are sub levels, and time trials, and rescue levels, and other variations. Once you have finished all of those you can spend some time with the challenges, competing with players from all over the world in timed events. There is also a soccer game in which you can use your jumping and punching abilities to knock a soccer ball into your opponent’s elevated goal. It is a super-speed, otherworldly version of the game that will leave you screaming at your opponent. The game moves pretty fast, but after spending nearly 20 hours with Legends I still had plenty left on my to-do list.

Rayman Legends is an absolute treat. Sure, the hardcore old-school platform lover is going to enjoy Legends on a whole different level, but even if you are just a casual player or just someone who likes to have fun, Rayman Legends is bound to be an amazing time. Playing by yourself, playing with friends, completionist or dabbler, Rayman Legends fits your play style just right. The game isn’t perfect, there’s some needed work to define characters in multiplayer and some controls need to be tightened, but these complaints don’t stop Rayman Legends from being hours and hours of platforming fun. Much like Origins, this charming and challenging game won me over in minutes and never let me go.

Our ratings for Rayman Legends on Xbox 360 out of 100 (Ratings FAQ)
Presentation
91
Elaborating off of Origins, Rayman Legends' art style is engaging, gorgeous, and special. It creates a light-hearted tone that leaves you smiling, no matter how challenging the game gets.

Gameplay
87
There's a blip here and there, but the gameplay is tight enough that the game never feels cheap. A challenging game needs responsive controls and Legends is able to accommodate.
Single Player
93
Legends can be a real beast of a challenge alone, but for those hardcore players who want it that way, the single player mode is an absolute joy.
Multiplayer
85
Aside from the time trials, Legends feels like it's meant to be a shared experience with others on your couch, but at times you lose your character or are tripped up by gameplay hiccups, hindering the experience.
Performance
90
Legends looks as well as it plays. Loading screens are quick, glitches are almost nonexistent.
Overall
90
Rayman Legends feels even better than Origins. It speaks to players of all types and offers a gameplay experience that is an absolute treasure. Give Rayman Legends a few minutes and it will win you over too. 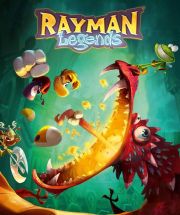 Our Review of Rayman Legends
90%
Superb
The Verdict:
"Rayman Legends returns with all of the joy Origins inspired, along with a few new tricks to make it even better."
Game Ranking
Rayman Legends is ranked #25 out of 1841 total reviewed games. It is ranked #4 out of 158 games reviewed in 2013.
24. Journey
PlayStation 3
25. Rayman Legends

All videos for Rayman Legends (3)
Advertisement ▼