Bionic Commando is sixth game in the Capcom's adventure-platformer series of the same name. The game was developed and published by Capcom in collaboration with Swedish developer GRIN (GRAW, GRAW2, Wanted). The game is a direct sequel to the second game and its remake Bionic Commando Rearmed, released in 1988 for the NES and in 2008 as a downloadable title. If you are not familiar with the previous games though, do not worry – the game is meant to serve as a reboot rather than a continuation of the franchise. That being said, it would certainly be helpful to be familiar with the series so that you may enjoy the various locales and characters from the series. However in my case, I was not aware of the series at all until the reboot was announced, so that’s the perspective from which I am reviewing this title. I did some digging to learn the basic plot details and key characters, but beyond that I played the game without any predictions or expectations. Whether that was a good thing, I am not sure.

The story of Bionic Commando take place 10 years after the original 1988 game’s ending. This means that a whole chunk of the story is told retro-actively, filling in the background as you go. All you know is that you’re in prison, sentenced to death for betraying your government. The fact that you are “bionic” (artificially altered) did not help your cause in court. Society has become aware and then afraid of the bionics, and laws were put in place to restrict their abilities as members of society. But one day, a bomb is dropped on Ascension City by a group called “pro-bionics”. The name says it all, they are a radical group trying to prevent their “kind” from being forced into exile and extinction. At this point, you pick up the role of Nathan "RAD" Spencer, still waiting in a jail cell. But now the government needs your help to actually go to the city and stop the radical group’s soldiers from taking over. Of course, after a long time in jail, Spencer does not wish to help, but his commander offers him information about Spencer’s long-missing wife if he helps. Spencer agrees, as he is still not sure what has happened to her 10 years ago. You are given the bionic arm by the commander to ensure you complete the mission. The story serves its purpose of propelling the action forward, but it’s all fairly cliché and mostly predictable. There are some minor twists in the story, but for the most part everything leads to a big and fun boss fight. Too bad the rest of the game isn’t quite as exciting. I actually had some trouble understanding why the main villain was “evil” or what exactly his back story is. Guess I would have to play previous games to find out, but you’d hope that with a reboot, new potential fans would get some explanations in the game. Bionic Commando is rated Mature, but it’s a very weak rating. There is almost no blood or swearing, and the shooting/grappling of enemies feels light and mostly harmless. I’m pretty baffled why Capcom didn’t choose to cut a few dialog swears (most are in poor taste anyhow) and make this Teen rated for much better profits. The best parts of the game are the last couple of levels, and they feel almost as if done by a different developer. They are exciting, fun, the dialog is suddenly well written and Spencer can actually be cheered for. But alas, the ending only makes the rest of the game pale even more in comparison.
1234Next 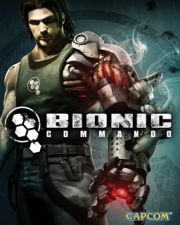