As the Modern Warfare series has fallen from grace with the death of Infinity Ward, Treyarch, once known as being second-fiddle in their cycle of bi-yearly Call of Duty releases, have shouldered the responsibility of moving the franchise forward. Black Ops 2 isn't the huge revolution the series ultimately needs, but a well paced campaign that gives you a bit of breathing room and reasonably competent multiplayer make it a strong entry into the franchise that manages for the most part to keep stagnation at bay. The same cannot be said for the co-operative Zombie mode which is far inferior to the spec-ops levels found in the last two Modern Warfare games, especially in the face of so many quality zombie games on the PC. Despite this weak link, If you are looking for a gripping but brief single player experience and a enjoyable but somewhat creaky competitive multiplayer layout then you might want to put your hate of the mainstream aside and give Black Ops 2 some consideration. 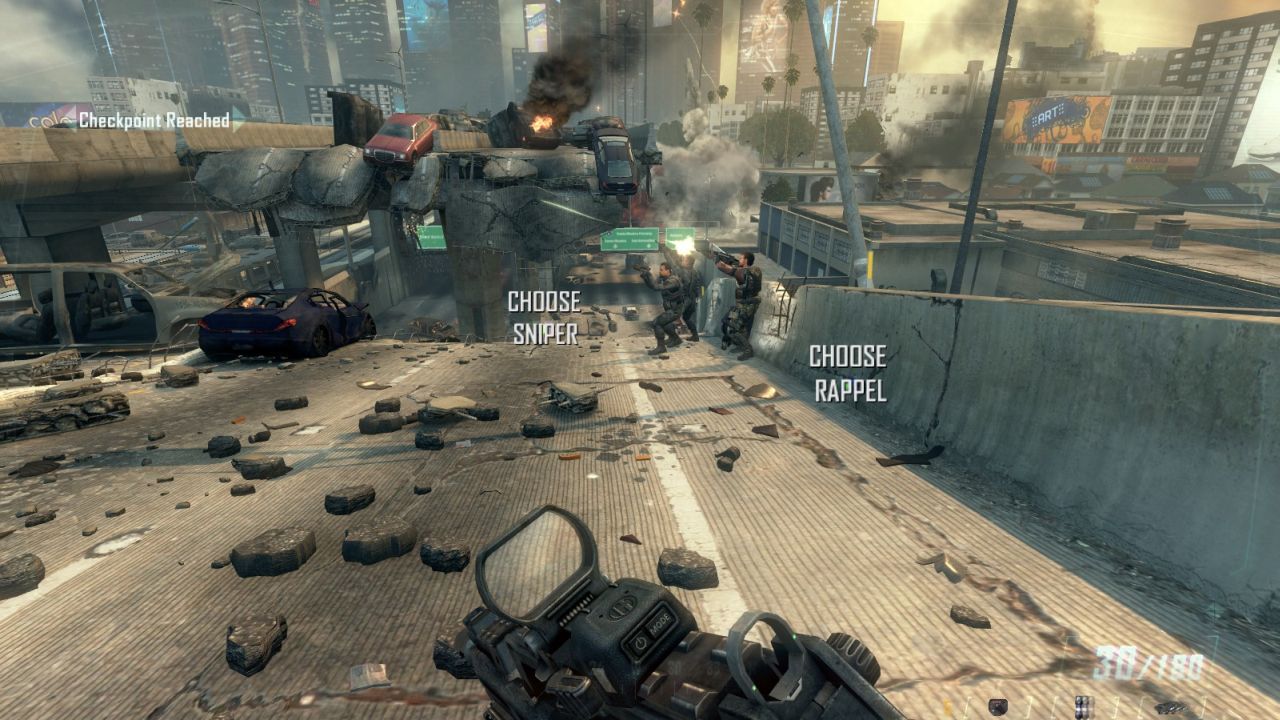 Since World at War, the Call of Duty series has been leaving authenticity behind in favour of tyrannical sociopathic villains and 'what if' nuclear warfare scenarios. Black Op 2 finally breaks free of any sort of pseudo-historical or marginally grounded premise, launching itself into the realm of futuristic science fiction shooters whilst keeping one foot in the ideas and structures that characterize the Call of Duty entries of the last few years. The campaign ties in to 2010's excellent Black Ops, with you playing as James Woods in the 1980s immediately following the events of the original, and switching to Alex Mason's son in the year 2025. The story flips back and forth between the two time periods, thoroughly antagonizing the impossibly fiendish and clever Menendez who has personal ties to both of the protagonists. The story is full of the usual worldwide nuclear war bravado that you would expect from a Call of Duty campaign, but the characters are interesting and well written, and the scenarios the game throws you into are often very interesting. Treyarch's vision of the future is full of believable politics, with the alliance between China and the United Stated playing a central role, although the technologies seem a bit too advanced to exist just fifteen years in the future. The game ends sooner than you might expect and doesn't wrap things up very well, but everything up to that point is well told and engaging.

For the most part you will be simply be shooting your way through the levels, but there are times when you get to make a choice. Some of these choices are obvious, with button prompts forcing you to decide between two courses of action. Other times they are more subtle, and require you to listen to what squad mates are saying. For instance, when you come across a group of terrorists throwing documents onto a fire. Your squad mate says something about grabbing Intel before it has been burned, and if you do this it changes the outcome of the mission even though it would be easy to not pay attention to what he is saying. Black Ops 2 does less hand holding than the last few Call of Duty games, and even has some levels that open up a bit allowing for some tactical freedom. While this breathing room definitely makes the campaign better, it also serves to showcase how brain dead the artificial intelligence can be. Vehicle segments abound, and you are given control of a variety of drones and cars that handle rather poorly with a mouse and keyboard. There is even one truly outrageous sequence where you ride around on horseback while firing RPG's single-handedly(literally you only use one hand) at tanks that would cause the likes of Clint Eastwood and John Marston to raise their eyebrows. These segments are still much preferable to the one-rails turret sequences that have been more common in the past. 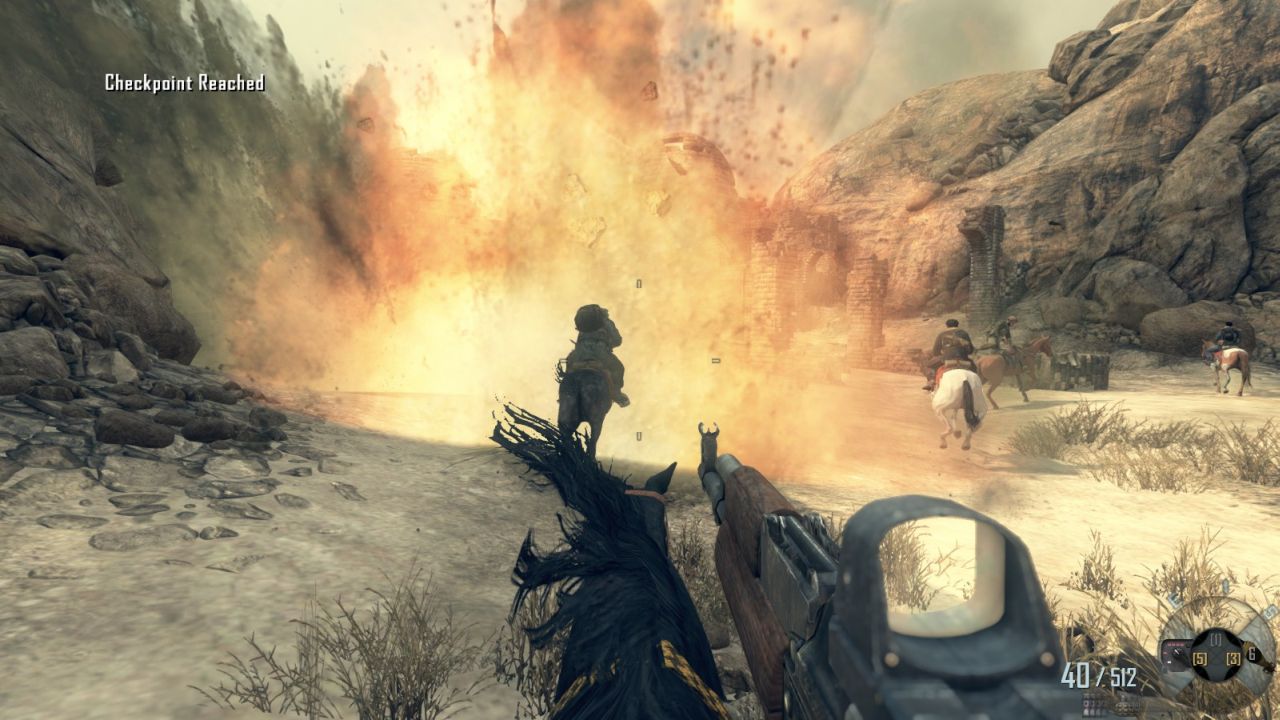 Some say the Masons are direct descendants of the Marstons

While apart from the choice all of these elements have been present in Call of Duties past, the new 'Strike Team' missions are something totally new for the series. These combine RTS elements with multiplayer maps to create sequences in which you must control a small force of troops and drones in completing a timed mission. You can give orders to the troops in an isometric perspective and also control and swap between individual units. The ideas present here are good, but the terrible AI fails these missions, meaning it is most effective to just run through and complete the objectives through direct control rather than by using the RTS mechanics. The Strike Team missions still make for a welcome change of pace in the otherwise relentless campaign, and completing all of them served to pad my completion time for the game by around thirty minutes. It took me about six hours overall to work my way through the campaign, a bit longer than some previous entries but I was left wanting more when it ended, a testament to the high quality of the missions present especially in the final stretch.