The first real content expansion to Spore brings new adventures for the Space stage, but leaves much to be desired for the rest of the game.

Galactic Adventures if the first true expansion pack for Spore, and I am glad it was released. The first addition to the original game was the Cute&Creepy parts pack, which retailed for cheap and only contained new parts for the creature editor. This made me cautious that EA was forcing Maxis once again to go down the Sims “endless content packs” road, with no actual new content. However, the Spore universe was saved when Galactic Adventures was announced. I will only be covering the newest additions to the game that are here via the pack, so if you want to know about the original game, read a review of that first.
Galactic Adventures was marketed as the first step in further expanding an already huge gameplay experience. It was said to have come from the suggestions of players that, after reaching the space stage, they really felt confined to their space ship with no ability to leave or explore new worlds from up close by beaming down to the planets. Well, Maxis took a creative approach to address these fan requests – you still cannot beam your creature down on any planet you wish to explore. Instead, the big features of the expansion pack are the Adventures. The game ships with around 10 adventures, and they all follow a fairly simple setup. Your creature (now called “Commander”) is able to travel to specific planets in your galaxy and take on missions. These missions allow you to beam down to a location on the planet with a custom-built town (not a regular colony seen in space stage) and take on various mini-quests. Each Adventure can consist of up to 5 quest chains, and in the end your Commander is awarded reputation. This reputation can be used to purchase new powers and equipment to be used during adventures. In a nut shell, Galactic Adventures expansion pack adds some heavily scripted RPG sequences to the game. The adventures you take on are fairly general, and have nothing to do with how your overall space stage game is progressing. You can free-travel to specifically marked planets to start an adventure, or often times another species will tell you to complete an adventure as a quest to progress your relationship with them.
As the trademark of Spore is creativity, the expansion pack ships with the Adventure Editor. This appropriately easily to use tool lets users create their own adventures from scratch. If you have already played through the game and know your way around the creature and vehicle editor, the adventure editor will be a very quick learning experience. Users can create their own quests, dialog and tasks, and then share them on Sporepedia with the same ease. The editor features a complexity limiter, which is the 5 acts per adventure that was mentioned earlier. This will undoubtedly restrict some players from creating anything grand without splitting it into a few different adventure files. Objects, NPCs, and quest markers are all easy to drag and drop, and you can also quickly jump in and test your quest without having to exit out and load a new game. The editor features familiar but fresh soundtrack, and the objects are pretty much everything you have seen before. This time though you add miscellaneous objects such as bombs and teleporters. Players select a pre-built planet and then edit it in a manner similar to the adventure creator.
12Next 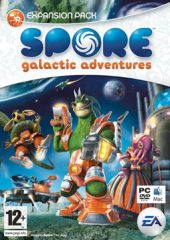